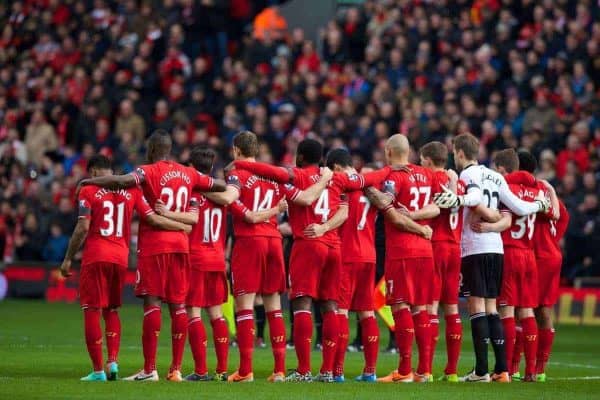 Henry Jackson (@OnFootballTweet) takes a look at some of Liverpool’s hugely impassive statistics over the course of their excellent 2013/14 season.

– Number of goals scored in the Premier League; a new club record.

– League goals scored by Luis Suarez; the most by a Liverpool player in the Premier League era. Previous best: 28 by Robbie Fowler.

– The number of Suarez’s goals that came from the penalty spot.

– Steven Gerrard’s assists for the season in the Premier League; more than any other player.

– Number of chances created by the Reds.

– The number of league goals scored via set pieces.

– The number of points Liverpool finished ahead of Manchester United.

– Number of league goals scored by Martin Skrtel; more than any other defender.

– The average attendance at Anfield during the 2013/14 campaign.

– Number of penalties scored by Steven Gerrard in all competitions.

– Number of games won in a row between 8th February and 20th April.

– Number of defeats suffered by the Reds in the league; their fewest since 2008/09.

– The number of first-half goals scored by Liverpool; more than 14 teams combined.

– The average of number of passes per game by the Reds

What is your favourite statistic of Liverpool’s 2013/14 season? Let us know in the comments section below.