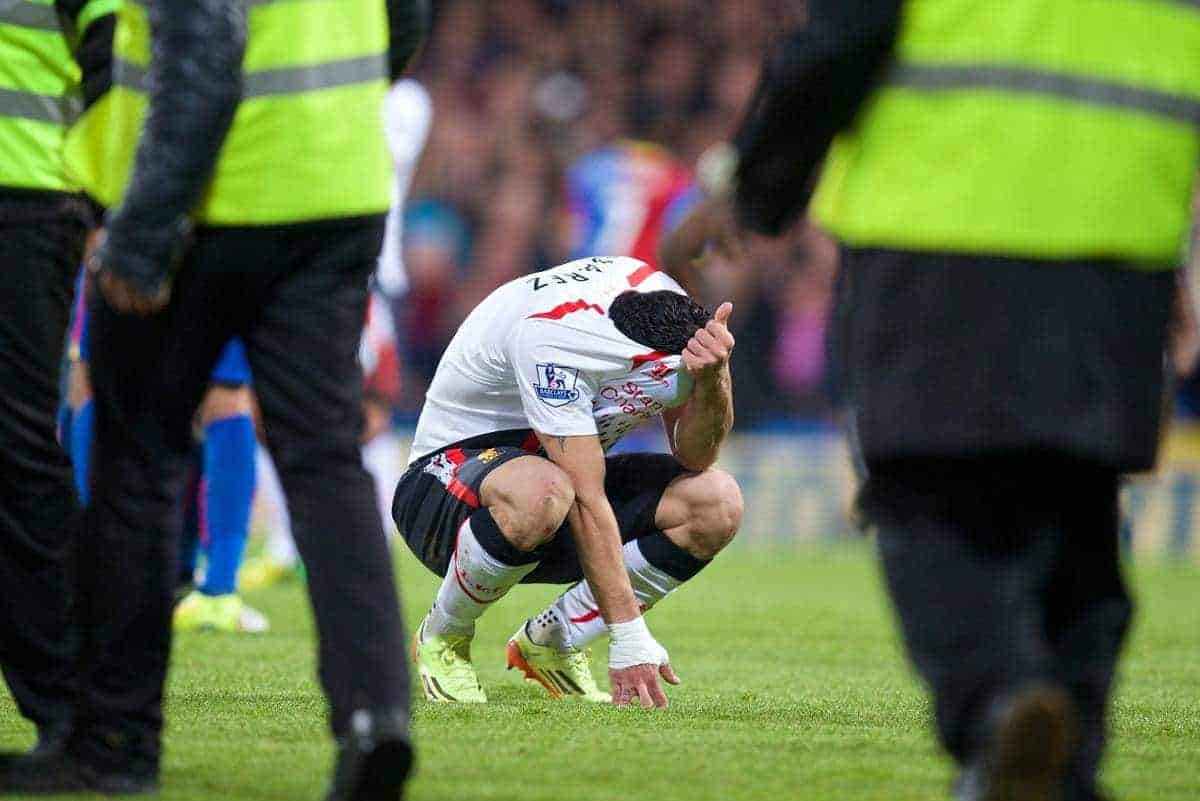 Through the gloom of Monday night’s 3-3 draw at Crystal Palace, Gary Taylor attempts to put the 2013/14 season into perspective.

I hate to say it, but if you point your ears eastward and listen very carefully now, you can just about hear the nasally tones of a fat Mancunian lady beginning to find her voice.

Ok, so maybe mathematically the title is not lost, but for me it’s all but gone now – and with Brendan Rodgers admitting as much along with the tears of Luis Suarez at Selhurst Park, I’m certainly not alone in thinking it.

Shell-shocked as we all are at the end of such a devastating and disappointing match, it’s hard not to point the blame – and to be fair there were a few candidates on the night.

The manager, fantastic as he’s been for most of the season, got it badly wrong, I feel.

The images of Suarez being physically sick prior to the match and Rodgers’ quotes that Sturridge hadn’t trained all week, gave more than a suggestion that all was not well with our strike-force.

At 3-0 up with half an hour to go, the need for fresh legs up front was obvious – it was patently clear that neither Suarez nor Sturridge were fully fit.

Yes, they both scored and yes, they were probably capable of another moment of magic, but in the interests of the team, perhaps one or both should have made way for fresher legs – even if those legs weren’t of the quality of those they were replacing.

Even after their first goal, the sensible thing, in hind-sight, would surely have been to shore up the defence and snuff out any chance of a serious comeback.

Of course, for a team to lose a three goal lead with only twelve minutes to go, the players must take some responsibility (the fit ones at least) – and some more so than others: Glen Johnson in particular, demonstrating exactly why he’s been drawing so much criticism from supporters over the course of the season.

Lucas Leiva, struggling either for fitness or in adapting to his new role, also looking a shadow of his former self; Victor Moses doing himself no favours, except perhaps with the powers that be over at Stamford Bridge, when he somehow contrived to miss a seemingly gilt-edged chance to grab the winner in injury time.

Others too, were guilty of some poor finishing and poor decision-making at both ends of the pitch.

But on balance for the season, if the title really is, as it now seems, gone is it fair to blame the players and the manager for one catastrophic game?

What if we’d not lost last week at home to Chelsea – there would have been no need to chase down an unlikely goal-difference against Palace. Is Steven Gerrard to blame then, for his highly publicised error and subsequent slip?

Or what about Jordan Henderson’s sending off against Man City? There’s no denying that he has been sorely missed over the last three matches.

It’s surely no coincidence that we’ve struggled in each game since his suspension, and you could easily speculate that we’d be at the very least two points better off had he been available for the last two games.

Will it ultimately be his rash challenge that postpones our wait for a Premier League title for yet another year?

Maybe it was Kolo Toure’s gift of a goal to West Brom at the Hawthorns and the two points lost that afternoon. Perhaps it’s down refereeing decisions, with blatantly wrong offside decisions and clear-cut penalties waved away at the Etihad and at Stamford Bridge again denying us a minimum of two vital points and an even greater point swing.

Even on Monday night against Palace there appeared to be two stone-wall penalty appeals turned down for Johnson and Suarez. At 3 nil up these appear inconsequential, but now… perhaps titles really do come and go on such decisions.

At a more fundamental level, perhaps the ultimate blame lies with the club’s owners, or the board.

If the squad had been strengthened in the January transfer window, as the majority of supporters clamoured for at the time, then perhaps the manager would have had enough quality players to not have to field unfit strikers, and to not miss Henderson so badly for a few matches, or be able have that little bit extra to call on to smash through Mourinho’s parked buses.

Looking even further back, there were clearly failings in our summer transfer dealings – with only Sakho contributing with any regularity to Liverpool’s premier league campaign.

So should we not point the finger at the transfer committee? Or again at the owners for not having deeper pockets?

The truth is that ALL of these factors have had a bearing on the ultimate destination of the title this season, but all of these things are just an inevitable consequence of where we are right now as a club – and in no way do I mean that in a negative sense.

We are still very much a club in transition, but right now, with only one fixture remaining this season, we are TOP of the Barclays Premier League.

Just think about that for a moment. Offered that at the start of the season, every single one of us would have gladly taken it – snatching off the hand, arm and upper torso of whoever was holding it out to us.

You can criticise all you like, but the fact remains that FSG have taken us from a club in decline to one very much on the rise – from the brink of ruin to a position of strength and financial stability in a just few short years.

Sadly though, certain so-called fans have much shorter memories. They clamour for the short term fix that “cannot fail” to push us on to “where we deserve to be”, for the kind of inappropriate spending that was very much a feature of the bad old days – a policy which was ultimately destructive and never really came close to achieving the desired results even in the short term.

FSG have gone about things the right way – working from the ground up to establish the principles and foundations on which long term success can be built – restoring a sense of identity and pride throughout all levels of the club.

The plan they developed was not a quick fix to take us from seventh (or eighth as it was then) to title winners in a single season – in reality these things just don’t happen.

Instead it detailed a steady progression – setting ambitious but achievable milestones along the road to the ultimate goal of once more competing at the top of the Premiership and amongst Europe’s elite clubs in the Champions League.

Few would contest the fact that we’re actually we’re way ahead of those original target milestones.

Yes of course right now it’s a major disappointment for us all, when the title was tantalisingly within our grasp after all these years, but given where we’ve come from and the speed of our progression it would be unrealistic not to expect at least one wobble along the way.

The truth is that we don’t yet have a title-winning squad.

The manager and the players have exceeded all expectations this year, but there’s no doubt it’s been a tremendously steep learning curve at times and there are bound to be mistakes and set-backs during the course of the season – it’s just unfortunate that we’ve been hit by them so close to the finish line.

The important thing now though, is just to keep that momentum going – to embrace the failings and the set-backs that inevitably come with such rapid progress, take lessons from them and ensure that we emerge stronger for it next time.

The foundations are undoubtedly in place for us to build on our achievements already this season – especially now with our guaranteed Champions League qualification, the impact of which for next year cannot be overstated.

Apart from an exponential increase in spending power, Liverpool will once again have the pulling power to attract the world class talent we need to really push on to that next level.

Even in the wake of such a crushing blow, these are still very exciting times for everyone connected with Liverpool Football Club. Let’s forget about what could have been and just get on with enjoying the journey.

What an adventure it’s been this season. What fantastic football we’ve been treated to. What amazing victories we’ve enjoyed.

It truly has been an incredible ride… and the best thing is that this is just the beginning… next year, WE GO AGAIN!