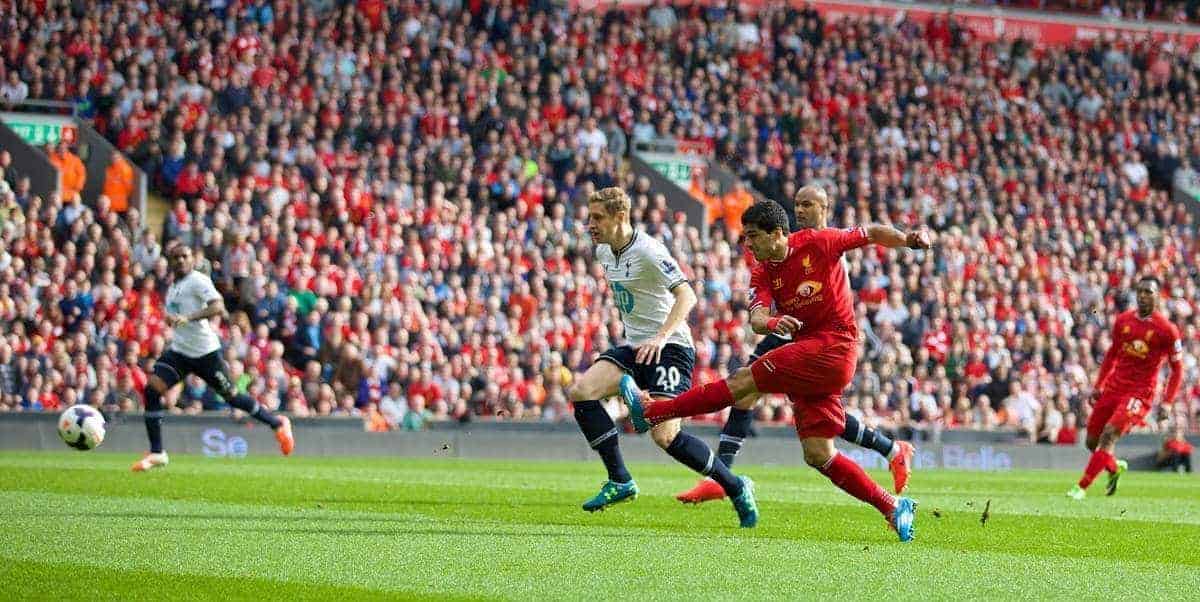 With the departure of Luis Suarez all but finalised, Ben Twelves takes a look back at some of the best moments of El Pistolero’s Anfield career.

Assist v Man United – The 3-1 victory thanks to a Dirk Kuyt hat-trick was Suarez’s first experience of the rival clash just a month after arriving on Merseyside. It took our new hero just over half an hour to introduce himself to United, as he bamboozled their defence, wriggling and twisting past four players before laying the ball on a plate for Kuyt who couldn’t miss.

Norwich Hat-trick 1 – A magnificent 50 yard strike capped off a sensational hat-trick for Suarez, whose goals handed Liverpool an easy win at Carrow Road and brightened up what was a disappointing league campaign.

Tormenting Terry – Liverpool exacted revenge on Chelsea in a 4-1 win at Anfield just days after a bitterly disappointing FA Cup final defeat to the Londoners, in a game that John Terry will be having nightmares over two years on. Suarez was simply too clever for the Chelsea captain, nut-megging him on countless occasions, as he absolutely tortured Terry throughout the 90 minutes.

Norwich Hat-trick 2, Goal 2 – Having run through 1 on 1 and fired hopelessly wide – leading to chants of abuse from the home crowd – from the resulting goal kick, Suarez robbed the ball from Michael Turner, twisted him inside out, nut-megged him, and stroked the ball home with an excellent finish with the outside of his right boot to score a magical goal and silence the boo boys.

Taunting ‘The Chosen One’ – After David Moyes expressed concern over his ‘diving’ in the build up to the Goodison Park derby, El Pistolero celebrated giving the Reds the lead by diving in front of the Everton managers’ technical area, much to the amusement of Kopites everywhere.

Comeback at Sunderland – A strong start to the season saw fortunes elevated to the next level when Luis returned to action at the Stadium of light, where he scored twice in a 3-1 win. Instantly Suarez recommenced his lethal partnership with Daniel Sturridge, who claimed both assists for the Uruguayans’ goals.

West Brom Hat-trick – El Pistolero grabbed the third hat-trick of his Anfield career in a 4-1 smashing at Anfield. The 3 goals consisted of one of the most remarkable efforts – a header from the edge of the box that arrowed into the top corner of Ben Fosters’ net, and a fantastic opener – where Suarez nut-megged Jonas Olson before firing home.

Captain Fantastico – With Steven Gerrard and Vice-captain Daniel Agger both injured, Brendan Rodgers made the bold but rewarding decision to hand the armband to Suarez, who scored twice to inspire the team to a 5-0 thrashing of fellow Champions League chasers Spurs.

Fantastic Four v Norwich – A record breaking Suarez smashed an incredible four goals against Norwich at Anfield, where his hat-trick goal celebration suggested that not even he could believe what he’d just produced. 10 goals in December set a club record and the Uruguayans’ astonishing form saw him  begin to receive world class acknowledgement.

Award Winner – An unbelievable season for Suarez was topped off by the Premier League’s top scorer claiming both the PFA player of the year and Football Writers Association footballer of the year award. It was an emotional moment for Luis, who was rightly rewarded with the recognition that his ability and performances deserved.