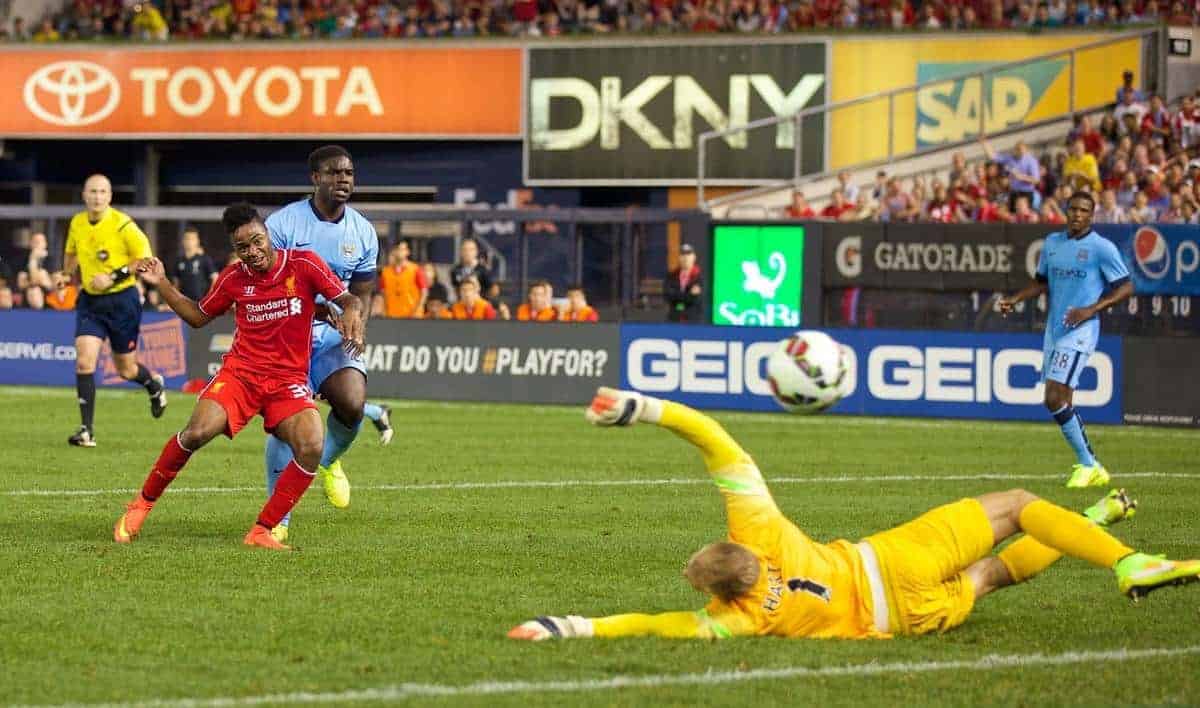 Liverpool defeated Manchester City on penalties after a terrific contest in New York. Simon Mignolet saved from Yaya Toure and Jesus Navas in the shootout, as the Reds top their International Champions Cup group. Liverpool boss Brendan Rodgers made five changes to the side that won 1-0 against Olympiakos in Chicago last weekend, as a Reds-dominated crowd in New York’s Yankee Stadium saw them face Manchester City.

Glen Johnson, Martin Skrtel, Emre Can, Raheem Sterling and Lazar Markovic made way for Martin Kelly, Sebastian Coates, Joe Allen, Philippe Coutinho and Rickie Lambert, with neither Skrtel or Markovic making the squad due to injury.

The game got off to a scrappy start- the appalling quality and questionable dimensions of the pitch certainly didn’t help matters- with Manchester City looking the more threatening of the two sides.

It took 11 minutes for the Reds’ first decent chance to arrive, with Coutinho shooting wide from the edge of the penalty area.

Three minutes later Rickie Lambert missed a golden opportunity to give Liverpool the lead, heading Jordan Henderson‘s cross straight at Willy Caballero in the City goal from a few yards out.

The half-time whistle blew with Liverpool having struggled to create chances, and last season’s Premier League champions on top.

Robinson almost gave his side a dream start to the second-half, but his shot was stopped by Joe Hart, who had also come on at the break.

Seven minutes into the second-half City broke the deadlock. Navas’ cross was not cut out by Gerrard- the ball squeezed though the captain’s legs- and Jovetic was on hand to poke the ball past Mignolet.

Liverpool were almost immediately level, but Hart again produced a fine save, this time from Coutinho. From the resulting corner Daniel Sturridge headed over.

The equaliser did come, however, with Henderson producing a superb finish inside the box following good link-up play between Sterling and Sturridge.

It didn’t take long for another goal to arrive, however, with Jovetic squeezing the ball home after it fell somewhat fortunately to the Montenegro international.

An enthralling contest continued, particularly by pre-season standards, with Sturridge and Coutinho both shooting wide.

In the final 10 minutes the Reds took control, and after Can and Mamadou Sakho both came close, they equalised with six minutes left.

Sterling, who looked sharp as soon as he came on, burst into the box to finish emphatically, taking the game to a penalty shootout.

Liverpool prevailed, with Can, Henderson and Lucas all converting, while Mignolet saved from both Yaya Toure and Navas. The Reds are now top of their International Champions Cup group on five points.

Man of the Match:Raheem Sterling

Rodgers switched from the 4-3-3 formation used in the recent games against Roma and Olympiakos in favour of the 4-4-2 diamond system.

Gerrard anchored the midfield as usual, with Allen and Henderson either side and Coutinho playing behind Lambert and Sturridge.

They reverted back to 4-3-3 in the second-half, with Sterling on for Lambert and Sturridge occupying the lone strikers role.