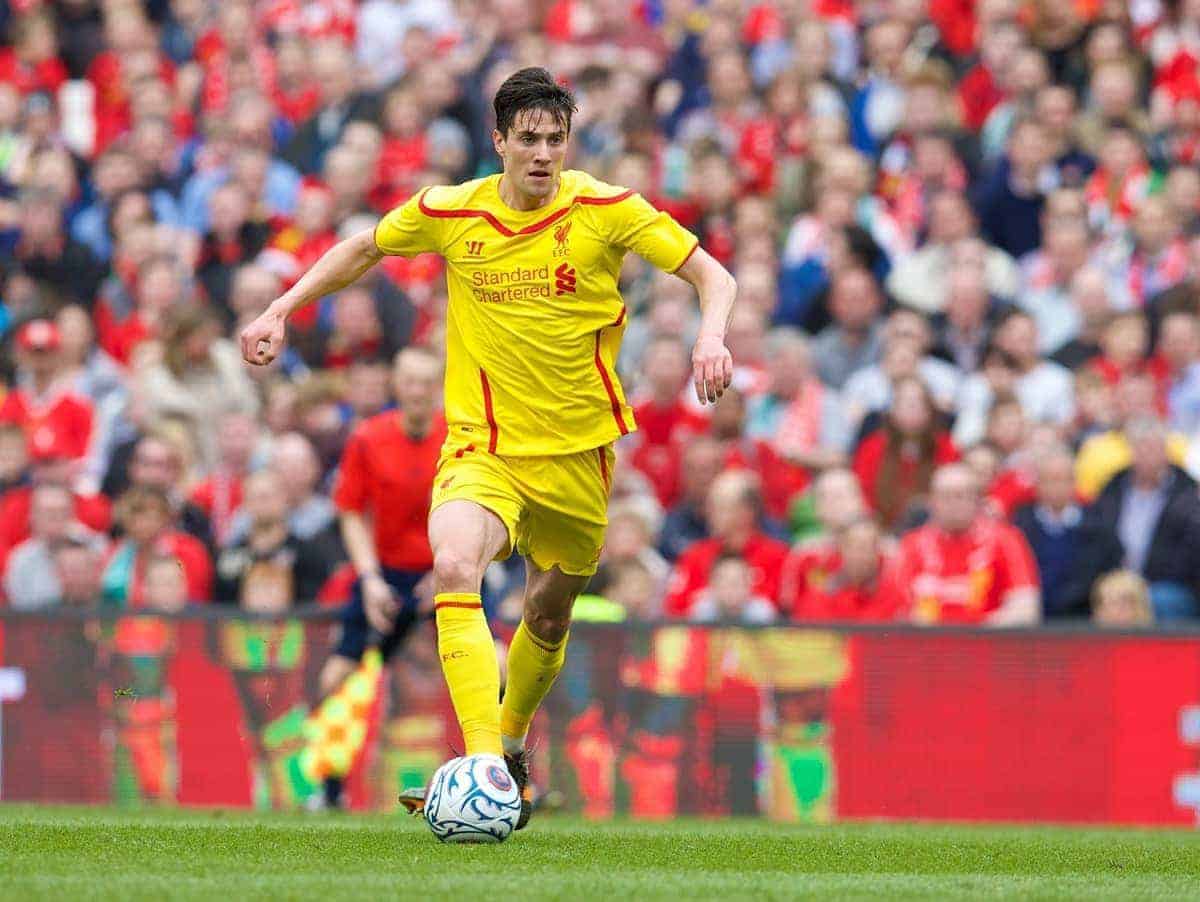 Liverpool defender Martin Kelly has spent the last two seasons on the sidelines. Jack Lusby explains why this pre-season is the 24-year-old’s make or break opportunity.

This pre-season offers a chance for Liverpool’s peripheral figures to impress manager Brendan Rodgers – with the first friendlies offering an opportunity while World Cup participants remain away on their holidays.

The epitome of periphery in the Reds’ squad in recent years has been local-born defender Martin Kelly.

A solid performer upon his breakthrough into the first team picture in 2010/11, Kelly has struggled to find consistency due to persistent injury issues ever since, and age is rapidly catching up with the 24-year-old.

This pre-season, Kelly will likely feature at some point, but this would surely be the player’s last chance under Rodgers at Liverpool.

So, can Kelly force his way in to Rodgers’ plans for next-season with an exceptional pre-season?

Kelly’s last appearance for the Reds came in the 4-0 post-season friendly win over Shamrock Rovers.

In that game, Kelly was deployed at centre-back as a veritable elder statesman, amid less tasking conditions—despite their season being in full flow at the time, Shamrock Rovers can hardly be considered trialling opposition.

He helped himself to a well taken goal on 74 minutes, capping a comfortable display at the back.

Many believed Kelly’s long-term role at Liverpool would be as a first-team centre-back and, now at the age of 24, this would likely be the position the defender would assume at any competitive juncture.

However, contrary to popular belief, Rodgers’ side are well stocked at the heart of defence, with a little tweaking likely to result in a solid defensive line.

Firstly, Slovakian Martin Skrtel had an impressive 2013/14 season, and has likely forced his way into Rodgers’ thinking long-term.

Elsewhere, French international Mamadou Sakho will marshal Liverpool’s defence for years to come and is one of world football’s finest young centre-backs.

Danish defender Daniel Agger may well be on his way out of Anfield this summer if the right offer is received, but still represents a solid option, underlined by his display in the final day victory over Newcastle United.

Reports have linked the Reds heavily with Southampton defender Dejan Lovren, who would complete a solid, menacing defence for Rodgers.

Below, statistics (courtesy of WhoScored) compare Kelly’s last genuinely impactful season, 2011/12, with that of these other centre-back options.

Tackles, interceptions, blocked shots and clearances made (all per 90) alongside passing accuracy are a suitable means to analyse a centre-back within Rodgers’ progressive system.

Here, Kelly pales on most fronts—aside from tackles and blocks made—and is particularly worrying when it comes to passing accuracy.

Naturally, given that Kelly’s results are taken from several season’s past, this comparison cannot be entirely conclusive.

However, the 24-year-old’s injury problems and subsequent lack of game time will surely have hindered any real progress in these areas of the game.

Adding Lovren to the side, despite a potentially hefty transfer fee, would be a much better option for Rodgers at centre-back—this is especially pertinent given the Croat’s age.

Kelly’s more natural position in competitive games for the Reds to date has been at right-back, however, and the Englishman was deployed there to good effect by Kenny Dalglish in particular.

Rodgers’ current options on the right hand side of defence are Englishmen Glen Johnson and Jon Flanagan, who will likely compete for the spot if Liverpool are to sign a new long-term left-back.

These will be supplemented by returning duo Andre Wisdom and Ryan McLaughlin, who spent portions of 2013/14 on loan at Championship sides Derby County and Barnsley respectively.

Both of these young loanees represent quality future defensive stalwarts for Rodgers.

Once more, statistics via WhoScored allow us to compare Kelly with the aforementioned right-back options—once more using the 24-year-old’s 2011/12 season.

Tackles and interceptions made are complemented by successful dribbles and accurate crosses made (all per 90) as well as an overall passing accuracy to reflect the balanced game of a modern full-back.

Here, Kelly is perhaps most comparable with 21-year-old breakthrough act Flanagan as a solid, no-nonsense right-back.

However, the latter is much better at going forward, and his successful acclimatisation into Rodgers’ system will no doubt stand him in good stead over a potentially returning Kelly next season.

Overall, Kelly seems a poorer choice, given age and performance, than the majority of these options. McLaughlin is clearly still a raw talent, but at five years Kelly’s junior, this is to be expected.

Brendan Rodgers: Martin Kelly will get his chance this year http://t.co/hRzv30OyiW #LFC pic.twitter.com/HcjysAa76S

Despite this lack of performances and creeping age, Rodgers has been nothing but encouraging of Kelly since the beginning of his tenure.

The manager is quoted as wholly complimentary of, and sympathetic with, the determined 24-year-old.

“Martin has been really unfortunate… as the season wore on and we were concentrating on one game a week, it was very difficult for him to get games.

“The game against Shamrock Rovers was his first game for a number of months. He played at centre-half, as opposed to right-back, where he has played a lot… there will be games next year for the likes of him to come and play in if we continue to qualify in the competitions.”

The words of a committed manager can work wonders with a player’s confidence, and as evidenced with the rise of Flanagan last season, Rodgers is one of the best man-managers in the Premier League.

The Northern Irishman is right, too, that the Reds will require players such as Kelly—perhaps content with a bit-part role in the squad—to add depth to a thin squad competing in more competitions in 2014/15.

Injury problems are a big issue for Kelly, but prove these are behind him and the 24-year-old could follow Flanagan into the thoughts of his manager.

But it should be his last chance.

It’ll be a difficult route for the Whiston-born defender, and one which will unlikely lead to a genuine first-team place, but an impressive pre-season could work wonders for Martin Kelly.

Do you think Martin Kelly has a future at Liverpool? And what will be his role? Let us know in the comments below.