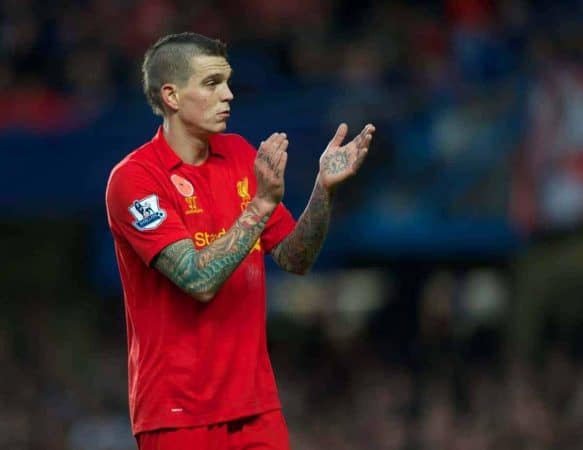 Daniel Agger’s Liverpool career ended on Saturday, completing a return to Brondby. Despite being a very fine servant to the club, his Reds career may be looked upon as a slight disappointment, explains Henry Jackson.

Agger’s exit brings an end to a Reds career that has brought us plenty of joy, but could have given so much more.

When the 64-time capped Denmark international joined Liverpool from Brondby for £5.8m in January 2006, he was a 21-year-old with a huge reputation.

The centre-back had impressed enormously five months previously when Denmark thrashed England 4-1, with his ability on the ball and leadership qualities standing out. A number of Europe’s top clubs were interested in signing him, but it was Rafa Benitez who persuaded him to join Liverpool.

With Sami Hyypia slowly becoming more and more of a squad player because of his advancing years, and Jamie Carragher approaching 30, Agger was seen as the long-term solution at centre-back; someone who would be the club’s key defender for the best part of a decade.

Sadly, for both us as Reds fans and for Agger, his career has just not panned out that way.

Injuries have consistently curtailed his progress over the years- he has reached 40 appearances in a season just once in his eight years at the club- and there have not been many periods when he has been the undisputed first-choice centre-back in the side, if any.

He was in and out of the team during his first full season in 2006/07, but he did play a pivotal role in the Champions League semi-final triumph over Chelsea, scoring the only goal of the second-leg to take the game to penalties. He started in the loss to AC Milan in the final too.

The following season was a disastrous one for the Dane, however, with a metatarsal injury keeping him out for virtually the entire campaign. He made just six appearances in all competitions.

Having missed the start of 2008/09 too, he returned in October but struggled to find his top form. His defensive qualities were beginning to come into question somewhat, in particular his ability to deal with physical strikers like Didier Drogba. The Ivorian had bullied him in the aforementioned semi-final first-leg at Stamford Bridge.

Back surgery meant that, once again, Agger missed the first few months of 2009/10, while in 2010/11 was he out for even longer. A knee injury ended his season in March, but he also had numerous niggles before then as well.

Agger enjoyed one of his more lengthy spells in the side under Kenny Dalglish in 2011/12, and his form was very impressive because of it. He formed an impressive partnership with Skrtel — had it not been for injuries they would have played many, many games together — and although the injury curse still didn’t evaporate entirely, he was more of a feature in the team than he had been for a number of years.

Rodgers’ arrival in the summer of 2012 coincided with Agger going almost injury free for the entire 2012/13 season. He appeared in 35 of the Reds’ 38 Premier League games, and his form was largely solid, barring a disastrous opening game in which Agger was sent-off and conceded a penalty in a 3-0 loss to West Brom.

Agger was named vice-captain last summer by Rodgers following the retirement of Carragher after he decided to stay at Anfield despite reported interest from Barcelona.

He fell out of favour for much of 2013/14 though, with Skrtel and Mamadou Sakho often the preferred centre-back pairing as the Reds finished second after a superb season. Agger played his part, but not as much as he’d have liked.

All of the above may make it sound as though Agger’s Liverpool career has been a disaster, but that’s not the case whatsoever.

He has scored some memorable goals, produced some Man of the Match displays and has been a crucial member of the squad for almost a decade. The harsh truth, however, is that he hasn’t lived up to the huge potential he had when he arrived on Merseyside in 2006.

That is mainly due to his injury woes in fairness, but he’s also never quite progressed at the rate many expected him to when he did get decent runs in the side.

He could have been a world-class defender and a true Liverpool great, but instead he’s had to settle for being a very fine international defender- one who is currently captain of Denmark- and a very good servant for the Reds. It’s far from disastrous.

At 29-years-old he should be in his absolute prime, but the amount of injuries he has had have clearly seen him lose a yard of pace, and he looks a less confident player than he once did.

Daniel Agger was terrific servant, but there will always be that nagging feeling that his Liverpool career was unfulfilled.

Do you agree that Daniel Agger hasn’t reached his potential at Liverpool? Let us know in the comments section below.