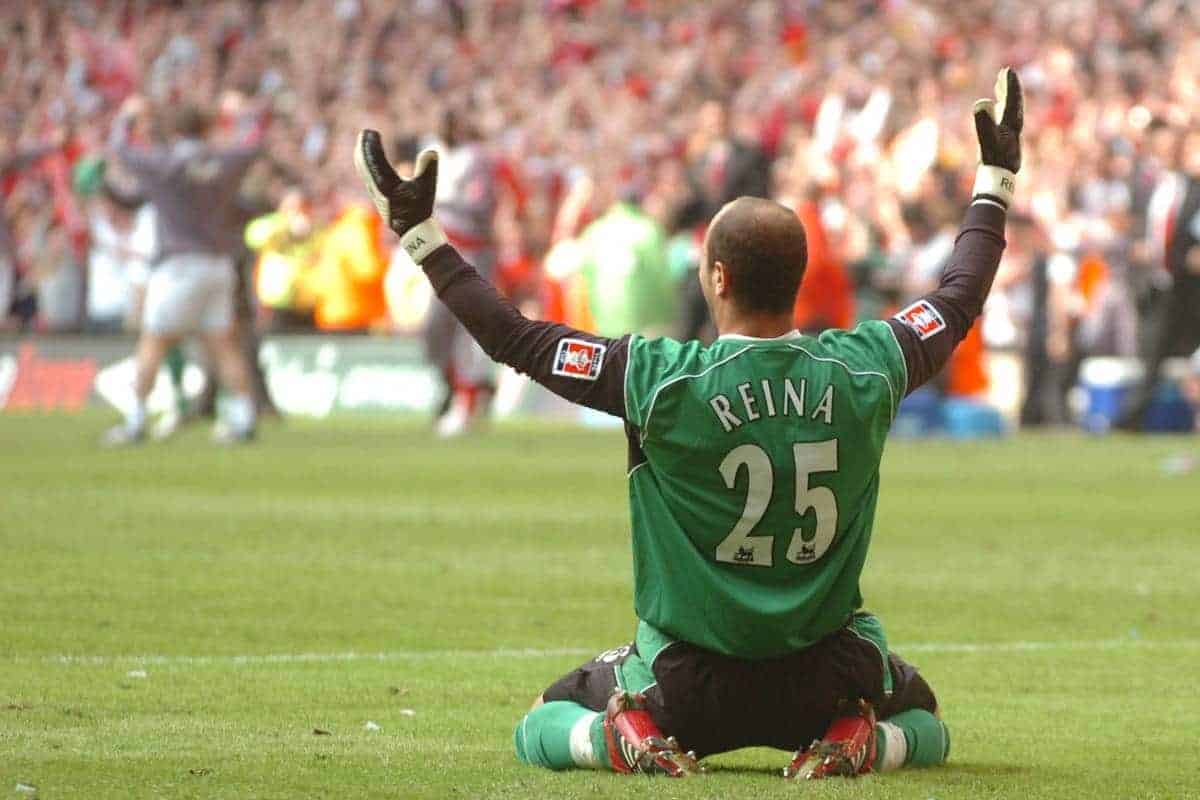 With Pepe Reina’s move to Bayern Munich expected to be completed on Wednesday, Henry Jackson takes a look back at the Spaniard’s terrific career, from its glorious highs to forgettable lows.

There can be no denying that Pepe Reina has been Liverpool’s best goalkeeper of the Premier League era, becoming a key player under Rafa Benitez and enjoying plenty of success at Anfield.

The 31-year-old will likely join Bayern Munich on a permanent deal on Wednesday, having spent last season on loan at Napoli, officially bringing an end to his time on Merseyside. Here is a look back at the charismatic Spaniard’s Reds career season-by-season.

Reina, just 22 at the time despite looking far older, signed for the Reds in July 2005 for £6m from Villarreal. Benitez described him as “the best goalkeeper in Spain”, and felt he was finally the world-class goalkeeper Liverpool had been craving for many years.

It was to be an exceptional first season at Anfield for the Spaniard.

He broke numerous club records, including keeping eight Premier League clean sheets in a row and 11 in all competitions. He also conceded fewer goals in his first 50 Liverpool games than any other ‘keeper in the club’s history. This helped Liverpool finish third in the league.

Reina’s season culminated in him winning the FA Cup, and along with Steven Gerrard, he proved to be the hero on the day. His saves in the penalty shootout win over West Ham– he expertly kept out Bobby Zamora, Paul Konchesky and Anton Ferdinand- saw the Reds triumph, and Reina win his first piece of silverware at Liverpool.

Reina’s second season on Merseyside started poorly, with a terrible mistake against Everton at Goodison Park a low point in a miserable 3-0 defeat for the Reds.

Despite this, his form gradually improved as the campaign progressed, and his performances helped Benitez’s men progress to the semi-finals of the Champions League where they faced Chelsea.

Although the west London club edged the first-leg 1-0 at Stamford Bridge, Reina was awarded the Man of the Match award having made several fine stops to arguably keep Liverpool in the tie.

In the second-leg at Anfield, he once again proved to be the penalty expert that many felt he was. He kept out efforts from Arjen Robben and Geremi, allowing Dirk Kuyt to fire the Reds into the final.

Although they lost to AC Milan in the showcase event, it had still been an excellent season for both Reina and Liverpool.

He won the prestigious Golden Glove award, given for the goalkeeper who has kept the most clean sheets in the league, for the second successive season.

The likeable Spaniard continued to cement his place as the Premier League‘s most consistent goalkeeper during the 2007/08 campaign, becoming the quickest Reds ‘keeper to record 50 clean sheets ever in the league (92 matches), breaking another club record in the process.

Reina made a total of 52 appearances that season, and his relationship with Jamie Carragher and Sami Hyypia ensured Liverpool were one of the most respected defensive units in European football.

His celebration when Ryan Babel’s strike sent the Reds through to the Champions League semi-finals at the expense of Arsenal– he ran the full-length of the Anfield pitch in ecstasy, epitomising what playing for the club meant to him- lives long in the memory.

Yet another Golden Glove award came his way, meaning he had won it in every one of his first three seasons at Liverpool.

The following season was one of Liverpool’s best ever in the Premier League, as they pushed Manchester United all the way to eventually finish second.

Reina’s performances were again terrific on the whole, and he played every single minute of league action. His dependability between the sticks was an absolutely enormous part of the Reds’ success during that period.

In March 2009 he kept his 100th Liverpool clean sheet- remarkable given the fact he had been at the club for less than four seasons at that point.

Benitez’s final year at Liverpool was an extremely poor one, but although many players’ form dipped dramatically that season, Reina’s form was brilliant.

He only missed out on a fourth Golden Glove award by virtue of Petr Cech having a better ratio in terms of goals conceded per game. They both kept a highly impressive 17 clean sheets.

Reina’s performances didn’t go unnoticed by the fans, and he won the club’s Player of the Year award having earned 75 per cent of the votes.

Reina was once again an ever-present in 2010/11, under the woeful reign of Roy Hodgson then Kenny Dalgish’s second spell as manager at Anfield.

The then 27-year-old’s season started in heartbreaking fashion, with his last-gasp howler robbing 10-man Liverpool victory at Anfield in their opening game.

His form throughout the campaign was simply nowhere the level he had produced over the previous five years, with Benitez’s exit perhaps a reason for it. He did at least record his 100th Premier League shut-out in December 2010. In May 2011 he also completed his 150th consecutive appearance in the league for the Reds.

There were signs, however, that Reina was past his best.

In November 2011 the Spain international ousted both Ray Clemence and Bruce Grobelaar as the goalkeeper to have the most clean sheets in Liverpool’s history, perfectly highlighting just how great a servant he had been.

Although still not the player he once was, Reina did help the Reds reach both the League Cup and FA Cup final in 2012.

Liverpool won the former on penalties, and although Reina didn’t save any of the spot-kicks- they either hit the woodwork or missed the target entirely- his presence and reputation undoubtedly gave the Reds the edge in the shootout.

Brendan Rodgers took over from Dalglish in the summer of 2012, and Reina was about to embark on what would be his final season as Liverpool’s first-choice ‘keeper.

An error against Hearts in a Europa League clash at Anfield saw Reina’s season get off to a poor start, and having once been such a reliable member of the team he now looked something of a liability.

His decision-making grew more and more erratic, with his misjudgement of a long ball allowing Sergio Aguero to snatch a point for Manchester City in February 2013.

There were some decent displays still, but they were just not as frequent as they had once been.

When Simon Mignolet was signed by the club in the summer of 2013 it was clear that Reina was no longer seen as first-choice by Rodgers.

With limited football likely at Anfield, he joined Napoli on loan where he enjoyed an impressive season under former manager Benitez.

Despite returning to Liverpool for pre-season this summer, it has been clear that the 31-year-old’s future lies away from Anfield.

He is expected to complete a medical at Bayern Munich on Wednesday, where he will be number two to Germany World Cup winner Manuel Neuer.

It will officially signal the end of his Liverpool career, and although the last couple of years may have been far from perfect, there is absolutely no doubt that Pepe Reina has been one of the best goalkeepers in Liverpool’s rich and illustrious history.

He has made 394 appearances in a Reds shirt, and given us some wonderful memories along the way.