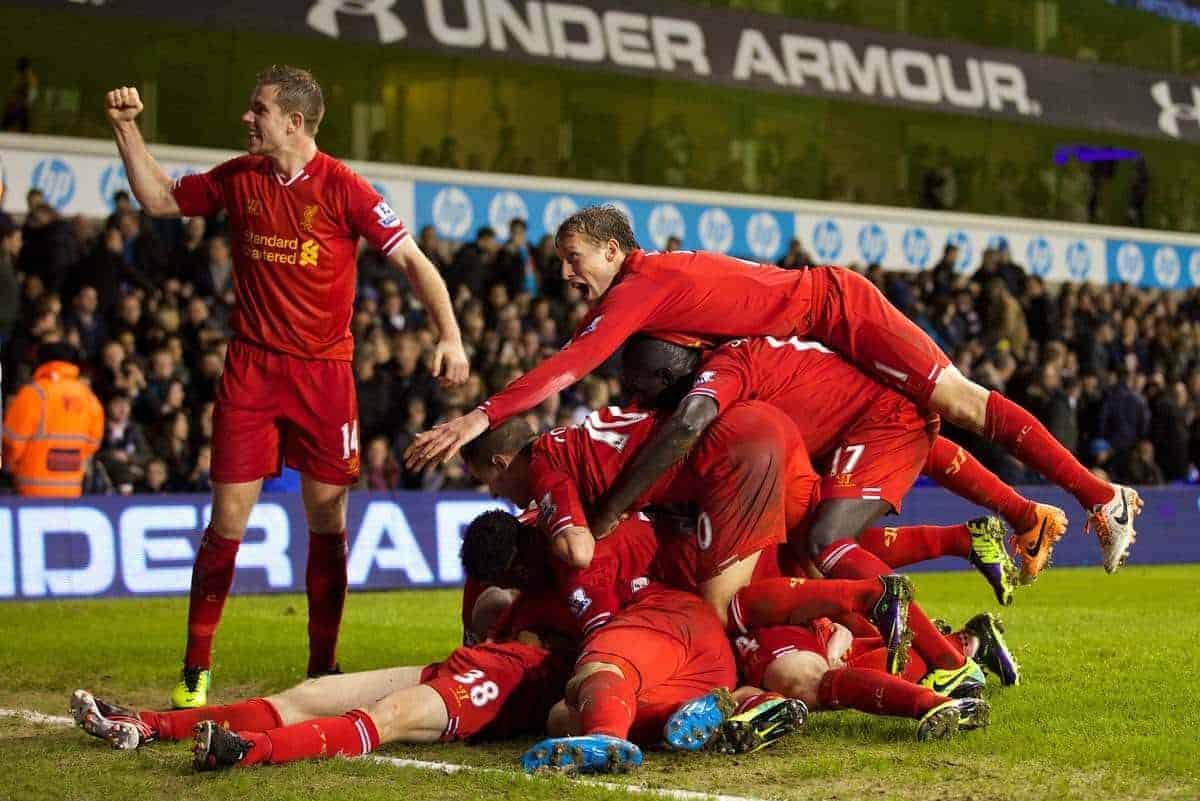 Liverpool travel to London to take on Tottenham on Sunday afternoon, looking to return to winning ways at the earliest opportunity. Ben Twelves takes a look at how Brendan Rodgers could shape his team for the tough encounter. Brendan Rodgers’ Liverpool head to White Hart Lane for their third game of the new league campaign on Sunday, where the Reds will face an in-form Tottenham side, who currently sit top of the early season Premier League table.

The Reds will be looking to put the disappointment of last Monday night’s defeat in Manchester behind them when they play in the Capital and the Liverpool manager could look to shuffle his pack again on Sunday afternoon, for a game that will this time round pose a completely different challenge to the one Rodgers’ side faced last December.

BR: Even the 5-0 win at Spurs last season we had to work for. Our organisation was at a high level, we expect a hard game this Sunday.

Liverpool have problems with the defensive line, as three of the four defenders who played against Man City picked up injuries. Martin Skrtel, Glen Johnson and impressive debutant Alberto Moreno are all doubts for Sunday’s clash as a result, and the Liverpool boss could be forced to make changes to his side defensively.

Positive news come in the form of exciting new signing Mario Balotelli’s availability for the game, and the Italian international could make his first appearance in the Liverpool red at White Hart Lane. Rodgers has confirmed more good news that Adam Lallana will return to the squad but it’s likely he will only make the bench due to being short of match fitness.

With Daniel Sturridge a proven and constant goal threat, it is extremely unlikely that Balotelli would replace the England striker, but instead the Italian could partner him in a two up front. That could see Rodgers opt away from the 4-3-3 deployed on Monday night, and back to the 4-diamond midfield-2 that worked so well in the second half of last season.

There continues to be question marks over what back line Liverpool could start with on Sunday, but regardless of injuries, now would be an excellent time to bring Mamadou Sakho into the starting team. The Frenchman could come into the side as the left sided centre back and Lovren, who is comfortable with either foot, could shuffle across to the right.

Javier Manquillo is a shoe-in replacement at right back for Johnson – who could struggle to be fit in time – but the England international’s experience could yet again see him given the nod ahead of the young Spaniard if he does recover.

Alberto Moreno, who the Liverpool boss says is recovering well, is also in a race against the clock to fully shake off the twisted ankle he picked up and if he doesn’t, Jose Enrique – the only other natural left back in the squad – could be thrown straight into a starting place, which would worryingly be his first taste of any match-day involvement this season.

Rodgers could consider a change of shape for the clash with Balotelli now available, and if the Ulsterman does revisit the diamond midfield and two up front, the Italian striker should go straight into the team alongside Sturridge with Rickie Lambert continuing on the bench.

Pochettino on Balotelli: "The only thing is that he is a very good player, a star. He is an unbelievable player and has very good skill."

A change in shape to a four man midfield would also benefit Philippe Coutinho who has struggled to impose himself in either of Liverpool’s two opening games from a wider position, but he should drop to the bench on Sunday in favour of ever-impressive Raheem Sterling operating at the tip of the diamond from the off, with the Brazilian magician in reserve for if and when needed.

The uncertainty over the Reds’ back four makes the defence hard to predict, but Sakho should come back into the team, while Johnson and Moreno should both keep their places if fit.

A change to a diamond midfield should take place allowing Balotelli to make his Liverpool debut alongside Daniel Sturridge in attack. As a result, this is how Liverpool should line up, injuries permitting:

If injuries frustratingly get the better of the Liverpool squad, Rodgers’ side could look something like this on Sunday:

However, if Liverpool boss choses to stick to a 4-3-3 formation, Liverpool should line up like this:

A defeat last time out to the Champions provided the Reds with a harsh reality check and Rodgers’ team will need to improve on the recurring defensive errors if they want to come away with anything from what’s going to be a tough match at White Hart Lane, as Liverpool look to return to winning ways at the first available opportunity.