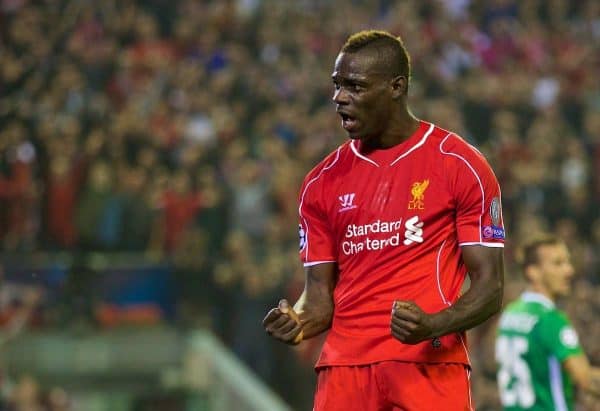 Liverpool returned to the Champions League on Tuesday night in win against Bulgarian side Ludogorets. Here, Jack Lusby analyses the performance of Mario Balotelli.

The beginning of the Champions League Group Stage on Tuesday night ushered in a triumphant return to Europe’s elite for Brendan Rodgers’ Liverpool, after a five year absence the Reds welcomed Bulgarian champions Ludogorets to Anfield.

Prior to the tie, Rodgers spoke of the need to “respect” the lowly opposition much in the same way Real Madrid will be treated later in the group games.

This proved an astute observation by the Reds manager, as Georgi Dermendzhiev’s side proved dangerous opposition in a fraught 2-1 victory for the home side.

PHOTO: #LFC line up for their official pre-match photograph pic.twitter.com/h5bBY0HZDE

A first goal for the club will have buoyed the 24-year-old following this close victory, but how did Balotelli perform on the whole on Tuesday night?

Well that's one way of dealing with the threat of Mario Balotelli. pic.twitter.com/oV67bcBVcX

In the same tactical layout the previous Saturday, in Liverpool’s 1-0 home loss at the hands of Aston Villa, Balotelli was the target of a bullish claret and blue defence; Philippe Senderos in particular kicked more than his fair share of lumps out of the striker.

It seemed that Ludogorets had been tasked with a similar game-plan when it came to approaching Balotelli, with the Italian on the end of some tough tackles from the off.

It is a credit to the Italian, however, that no reaction was provoked.

For being perceived to have signed a firebrand in the £16 million summer move, Rodgers has seemingly acquired a matured Balotelli—in his time in the Premier League with Manchester City as a younger man, Balotelli would surely have lashed out by now.

Playing the target for Dermendzhiev’s men, Balotelli played the target man in Rodgers’ system for much of Tuesday night’s tie.

Perhaps deviating from the Reds boss’ malleable attacking system, the Ulsterman’s side relied too often on the strength of the striker as they aimed to upon the Ludogorets defence.

With Brazilian No. 10 Philippe Coutinho underperforming once more, a gulf appeared between the midfield base of Gerrard and Jordan Henderson and the forward line, forcing Balotelli to drop deeper and deeper to receive the ball.

Mario Balotelli's first half heat map has seen him dropping far too deep to collect the ball. pic.twitter.com/jNHiPEYon1

Balotelli consistently found himself in the space that Coutinho should have occupied, and this saw the striker’s attacking contribution suffer.

However, this outlined another important factor of Balotelli’s game under Rodgers, in the Italian’s work rate and pressing play.

Here, Balotelli can be seen harrying the Ludogorets wide man in the Reds’ right midfield position, outlining the desire and hunger that the striker is exuding under Rodgers.

The above move saw the 24-year-old win the ball and, subsequently, another cheap foul from the Bulgarian side.

Another positive to Balotelli dropping deep into what was effectively the No. 10 role was the striker’s passing ability—and this crucial as a lone striker.

In the first half, this could be seen as Balotelli bent a pass into the path of a rampaging Alberto Moreno, providing the Spaniard with one of few clear opportunities for the Reds in the early stages.

The former Sevilla man blazed over the bar from long range with the resulting effort.

Into the second half, Balotelli was involved in a different sphere, with a headed knock-down in the box—for once—providing Lallana with an opening in the box; the midfielder’s attempt was unfortunately blocked, and there were claims for a penalty, too.

Balotelli’s creativity in this deeper role was apparent in the move of the game, with a ball sprayed out wide to an onrushing Javier Manquillo—arguably the Reds’ best player on the night—from a position around 30 yards out.

However, as highlighted, Balotelli’s position at the end of this move signals the importance of the striker performing in a position that is just that—of the striker.

It is a lot to ask of the Italian to provide the pass and then make it into the box to head at goal, but as a lone striker Balotelli should be spearheading this move; however, this is due to more deficiencies elsewhere.

The striker did have his fair share of attempts on goal, however, and was knocking on the door throughout the game.

21 mins: Balotelli does brilliantly to spin into space on the edge of the box, but his shot is blocked by a defender #LFC

An early attempt on 21 minutes saw Balotelli’s shot blocked, beginning one of the game’s motifs, as the stubborn Ludogorets defence threw themselves at the Reds attack.

When Balotelli’s shots weren’t being blocked, the Italian was unfortunately showing some of the wayward form in front of goal that typified his debut against Spurs.

This could be seen as the striker skied a volleyed attempted high and wide of the goal in the second half, with the Reds still chasing an opener Balotelli’s profligacy was becoming frustrating not only for those watching, but clearly the player himself.

Finally finding the net on 82 minutes, the relief was clear to see.

82 mins: #LFC are ahead and it's Mario Balotelli who gets it, stabbing home from close range after a scramble in the box. Get in!

For a player who supposedly doesn’t celebrate, Balotelli’s reaction was full of passion and vigour—this first goal for the club clearly meant a lot to the Italian, who will hope for many more this season.

Clearly a confidence player, Balotelli came close to doubling the Reds’ lead on 85 minutes, with a curled strike from the edge of the box saved by goalkeeping debutant Borjan.

85 mins: Balotelli powers into the box and fires one at goal, but it's beaten away by Borjan #LFC

Whilst it finally fell to Gerrard to secure the spoils for the Reds, it was the cutting edge of big-game player Balotelli who truly gave Liverpool their bite against Ludogorets.

A box-office star, Balotelli is required to perform to his best on the highest stage and, whilst this wasn’t the best performance by the striker, an experienced quality shone through with the goal on 82 minutes.

With the return from injury of Daniel Sturridge imminent, hopefully Balotelli will be required to do less of the huffing and puffing between the No. 10 position and the areas traditional expected to be filled by a lone striker.

However, the creativity and work rate shown once more by the 24-year-old will be greatly encouraging, and the intelligent runs of Sturridge should complement this.

Balotelli will be crucial in this return campaign amongst Europe’s elite.

Overall performance rating: 7 out of 10.