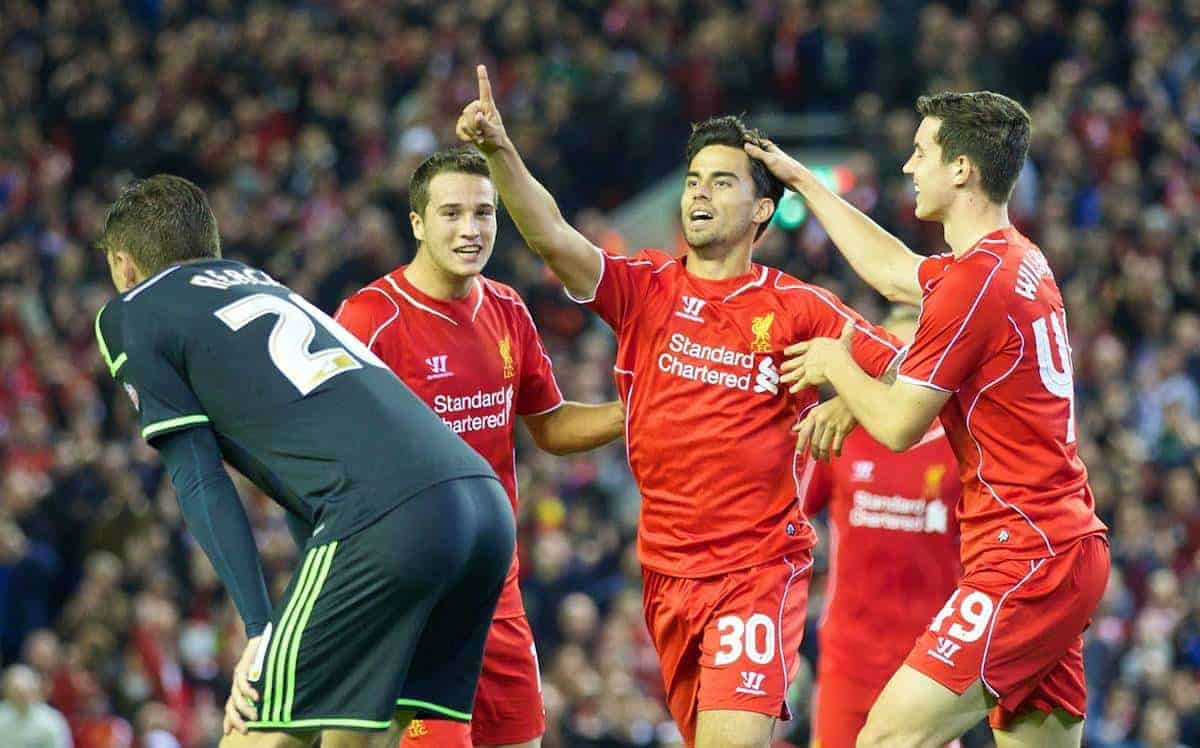 Liverpool edged past Middlesbrough in the League Cup third round on Tuesday evening, winning an incredible penalty shoot out 14-13 after drawing the match 2-2 after extra time. Brendan Rodgers opted for a 4-3-3 formation, with Rickie Lambert handed his first start for the club up front alongside Raheem Sterling and Lazar Markovic.

Jordan Rossiter came into the side to make his debut in midfield alongside Lucas and Adam Lallana, while Jose Enrique made his first start for almost 12 months in defence.

Another mixed bag from the Reds’ keeeper; made two superb saves – one in each half – saved a penalty and scored his own in the incredible shoot out. But still lacks presence inside the box and was arguably at fault for conceding yet another set-piece goal.

The Spaniard had a quiet first 45 minutes and grew into the game. He was actually one of the attacking threats later in the game. Another solid but raw performance from him.

A bizarre night for Toure on his first start since February (the calamitous own goal at Fulham). The first half saw him play some woeful long balls and one which he simply hammered into touch with no pressure on him. Added to that he gave away the penalty in stoppage time of extra time.

Sakho is one who divides opinion, but he’s a solid performer, strong in the air and accurate in possession.

Making his first start since being sidelined with knee problems last year, Enrique started well and was good in the tackle. He clearly tired as the game went on but that should be expected.

Another very Lucas-like performance; neither great nor poor. Nothing spectacular either way. Perhaps disappointing that he didn’t get forward more when he had Rossiter holding midfield. Showed good character later on and took both spot kicks well.

Given that the 17-year-old was making his first appearance for the club, this was an excellent showing before he was replaced on 79 mins. Took his goal expertly and showed no nerves, often leading others around him. A proper old school midfielder.

Lallana was one of the more creative players on the night, showing nice touches and signs that he is hitting fitness. However, he did hold onto the ball too long on occasion and struggle to find that final ball or shot, often slipping on his backside.

The Serbian is struggling to get to grips with life at Anfield so far. He passed up two good opportunities to shoot and his final ball was often lacking. A somewhat anonymous display overall.

By far Liverpool’s best performer for 120 minutes – up until he gave the ball away which lead to Toure conceding the penalty for the equaliser. Sterling was strong, energetic, creative. Everything that Liverpool’s attack, on the whole, wasn’t.

Ponderous. Poor on the ball, lack of movement off it. Failed to make any impression in a positive manner in the final third. Lambert looks like a player who needs to be playing regularly to get the best out of him, and that isn’t happening at Liverpool.

Came on and provided more than Lambert but wasn’t at his best.

Took his goal well and generally did well, good in possession at a crucial part of the game. Perhaps unfortunate that he wasn’t involved earlier, or from the start.

Showed great character making his debut under such circumstances, simple and tidy in possession.

Who were your top three performers? Let us know in the comments below.