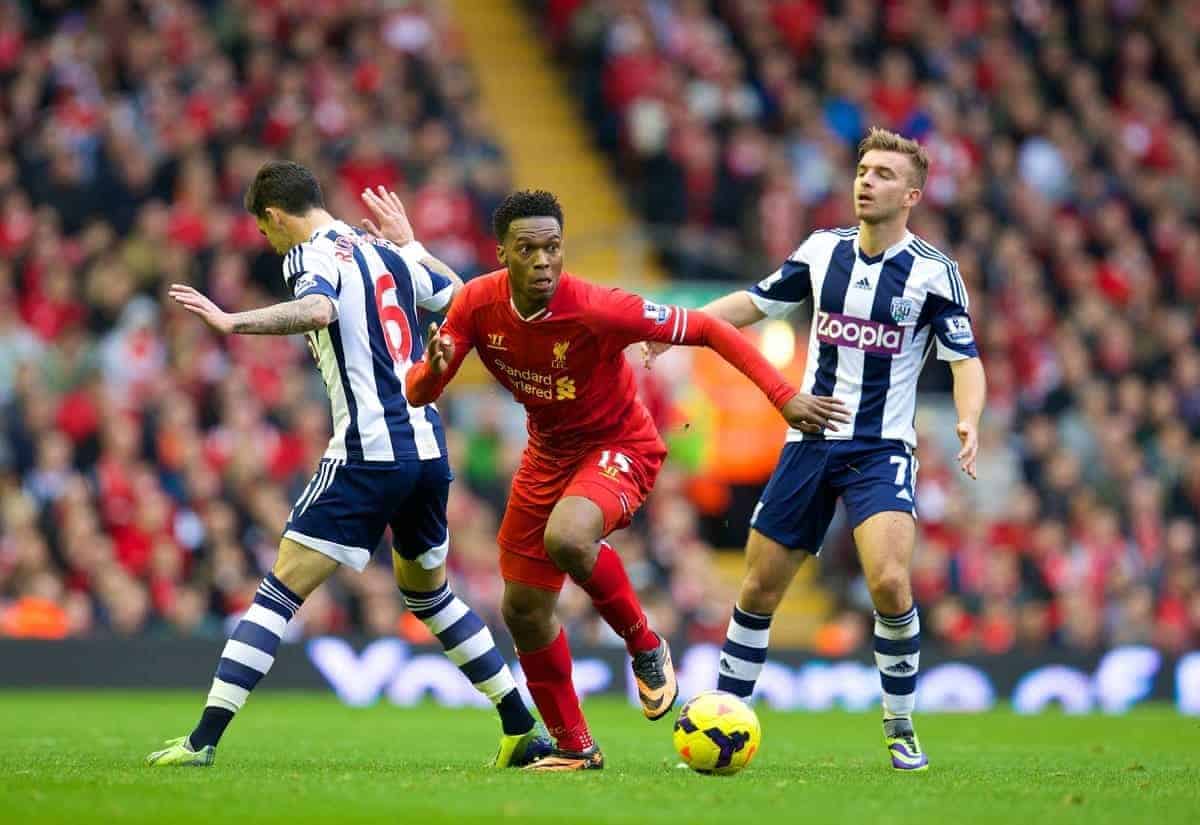 Liverpool welcome West Brom to Anfield on Saturday afternoon for their last fixture before the international break. Ben Twelves looks ahead to the match.

Brendan Rodgers’ struggling Liverpool return to Premier League action at Anfield on Saturday afternoon when they host an in-form West Brom, and the Reds will be looking end their three game winless run in the league ahead of another disruptive international break.

Rodgers’ side will be determined to put a bad month of September behind them – in which they only recorded one outright win in six games culminating in Wednesday’s 1-0 loss against FC Basel – and begin to change their on pitch fortunes in October, where a kinder run of league fixtures await either side of the mammoth Champions League encounter with Real Madrid.

In last season’s corresponding fixture the Reds romped to victory against Steve Clarke’s Baggies with a resounding 4-1 win, thanks in no small part to a stunning hat-trick from Luis Suarez.

The Uruguayan handed Liverpool the lead after just 12 minutes with a jinky run and finish, before he added his second of the game with an outrageous header from the edge of the box from Aly Cissokho’s deflected cross.

El Pistolero then scored his third when he glanced in a header from Steven Gerrard’s pin-point free kick before James Morrison pulled one back for the visitors, and Daniel Sturridge rounded off an excellent afternoon when he scored a deft chip which sailed into the Kop net. All eyes ahead of the game are fixed on the sorely missed Daniel Sturridge, and the England international will be hoping to be involved for the first time since the 3-0 victory against Tottenham as he edges closer to a return to action, though the Liverpool boss says he’ll have to “wait and see” if he’s fit for the weekend.

Rodgers: "My focus is on getting Sturridge fit for Liverpool. He has been out for nearly four weeks with a grade one strain."

Mamadou Sakho became the latest name to be added to the injury list in midweek, and he faces a number of weeks out with a strain as confirmed by Rodgers, meaning he will miss the match along with Emre Can, Glen Johnson, Joe Allen and Jon Flanagan who are all still unavailable.

The bad news with injuries continues for the Liverpool boss, as Spanish attacking midfielder Suso confirmed himself via his Instagram account on Thursday morning that he’s set to be out of action for two months with a groin injury that will require a surgical procedure.

Spanish youngster Suso has put on Instagram that he's to be out two months with a groin injuryhttp://t.co/ckOvpz5wxd pic.twitter.com/HqgXUK2oxp

With the dwindling number of players that are at his disposal, Rodgers is in no position to make wholesale changes to his team.

However, Alberto Moreno is pushing for a recall to the starting line-up after he was benched in favour of Jose Enrique who started his first game of the season – as Rodgers provided some fresh legs to his back four – and Adam Lallana too will be hopeful of a return to the starting XI after dropping to the bench in midweek against FC Basel despite a promising Merseyside derby performance.

After a sticky start to the season for new manager Alan Irvine – having recorded no wins recorded in their first four games – West Brom have won their last two in a row – grabbing an impressive victory at White Hart Lane against Tottenham before thrashing Premier League new boys Burnley 4-0 last time out.

Rodgers on WBA: "Last two results have been excellent. Got a good win away at Tottenham. It will be a tough game for us."

Having been appointed during the summer taking over from Pepe Mel, Irvine was the most active manager in the Premier League during the summer, bringing in 11 new faces to the Hawthorns – and getting rid of 9 – as he revamped the squad at his disposal.

Among the arrivals in the West Midlands were £10million striker Brown Ideye from Dynamo Kiev, Premier League experienced duo Joleon Lescott and Craig Gardner, as well as our very own Andre Wisdom – who is ineligible for the match – on a season-long loan deal. Uruguayan centre back Diego Lugano was included in those let go, as was long-serving Hungarian, Zoltan Gera, along with Liam Ridgewell and Steven Reid.

West Brom have won twice in their last three visits to Anfield – prior to the 4-1 defeat last season – with England manager Roy Hodgson and Steve Clarke both leading their sides to victory on Merseyside in recent years.

For the first time this season, Liverpool will enjoy the rare feat of a traditional Saturday afternoon 3pm kick off.