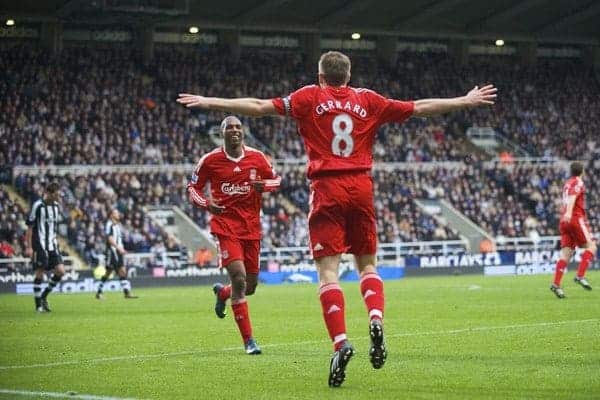 Liverpool travel to the North East on Saturday to face Newcastle, and we look back at the Reds’ best victories at St James’ Park in the Premier League era.

Liverpool have had plenty of success at St James’ Park since the Premier League‘s inception in 1992. It has been a ground where they have enjoyed numerous thumping wins, particularly in the last decade.

They will be hoping for more of the same on Saturday when they face the Magpies, as Brendan Rodgers and his side look to spring their slightly disappointing season so far into life.

Here are five of the most memorable wins at Newcastle in the Premier League era.

Rodgers was nearing the end of his first season in charge at Anfield, and Liverpool were starting to find some impressive form.

The signings of Daniel Sturridge and Philippe Coutinho three months earlier had given them far more firepower, and the Reds simply blew away Alan Pardew’s side on the day.

Daniel Agger headed them in front very early on, and Jordan Henderson finished clinically after 17 minutes, following good work from the two new signings. Sturridge then scored twice in six second-half minutes, both from close-range, as Rodgers’ men ran riot.

There was still time for Fabio Borini to score his first Premier League goal for the club, while Henderson’s free-kick from out wide curled straight in. It was an emphatic win, and gave a glimpse of what was to come in 2013/14.

Rafa Benitez’s side were flying at this point in the 2008/09 season, and this magnificent display tightened their grip at the top of the Premier League table.

The Reds were almost embarrassingly dominant from start to finish, and by the time Steven Gerrard fired them in front after 31 minutes, it’s no exaggeration to say it could have been 4-0. Sami Hyypia powered home a header soon after, and although David Edgar pulled one back just before half-time, Liverpool were still in complete control.

Ryan Babel bundled the ball home to make it 3-1, before a fabulous pass from Lucas Leiva allowed Gerrard to race through and clinically score a fourth. Substitute Xabi Alonso put the icing on the cake, scoring a late penalty to complete the scoring.

Benitez’s men would eventually finish second in the league, but they pushed Manchester United all the way.

Despite growing friction between Benitez and Liverpool owners Tom Hicks and George Gillett, Liverpool produced a terrific performance to dispatch of Sam Allardyce’s side back in the 2007/08 campaign.

Gerrard, who had been booed by the home fans due to England’s failure to qualify for Euro 2008 a few days earlier, fired home a sensational 30-yard free-kick in the 28th minute to give his side the lead. Shay Given should have been sent-off before the break for handling the ball outside his area, and Fernando Torres hit the post in the process.

The Reds scored almost immediately after the interval, with Dirk Kuyt shinning the ball home following Hyypia’s flick-on. Babel added a third midway through the second-half with an excellent finish, and they saw out the rest of the game with ease.

Benitez was beginning to take Liverpool’s formidable Champions League form into the Premier League, and they enjoyed another comfortable St James’ Park victory back in 2005/06.

Peter Crouch, who had endured such a tough start to life at Anfield, headed the Reds in front after just 10 minutes before Gerrard, so often a thorn in Newcastle’s side down the years, fired home a crisp effort after good link-up play with Crouch.

Shola Ameobi made it 2-1 before half-time with a header, but their momentum was completely lost early in the second-half when Jean-Alain Boumsong when sent-off was hauling down Crouch in the area. Djibril Cisse dispatched the spot-kick, as Liverpool kept the pressure on United at the top. They would eventually finish third that season.

Michael Owen had become a superstar at the 1998 World Cup in France, and this was another afternoon in which his reputation increased hugely. Ruud Gullit had just become Newcastle manager, but it was a day to forget for the Dutch legend.

Owen put Liverpool in front after 17 minutes, scoring from a tight angle to make it 1-0. Just a minute later he finished clinically past Given, and the Magpies’ defence simply couldn’t live with him.

Although Stephane Guivarc’h scored a 28th-minute goal against the run of play, Owen completed his hat-trick soon after. The then 18-year-old raced past two defenders before flicking a nonchalant effort with the outside of his foot into the corner of the net.

Patrik Berger emphatically made it 4-1 on the stroke of half-time, with Gerard Houllier’s Liverpool side rampant. There were no more goals after the break, as the Reds continued their unbeaten start to the season.

Let us know your greatest memories from visits to St James’ Park in the comments section below.