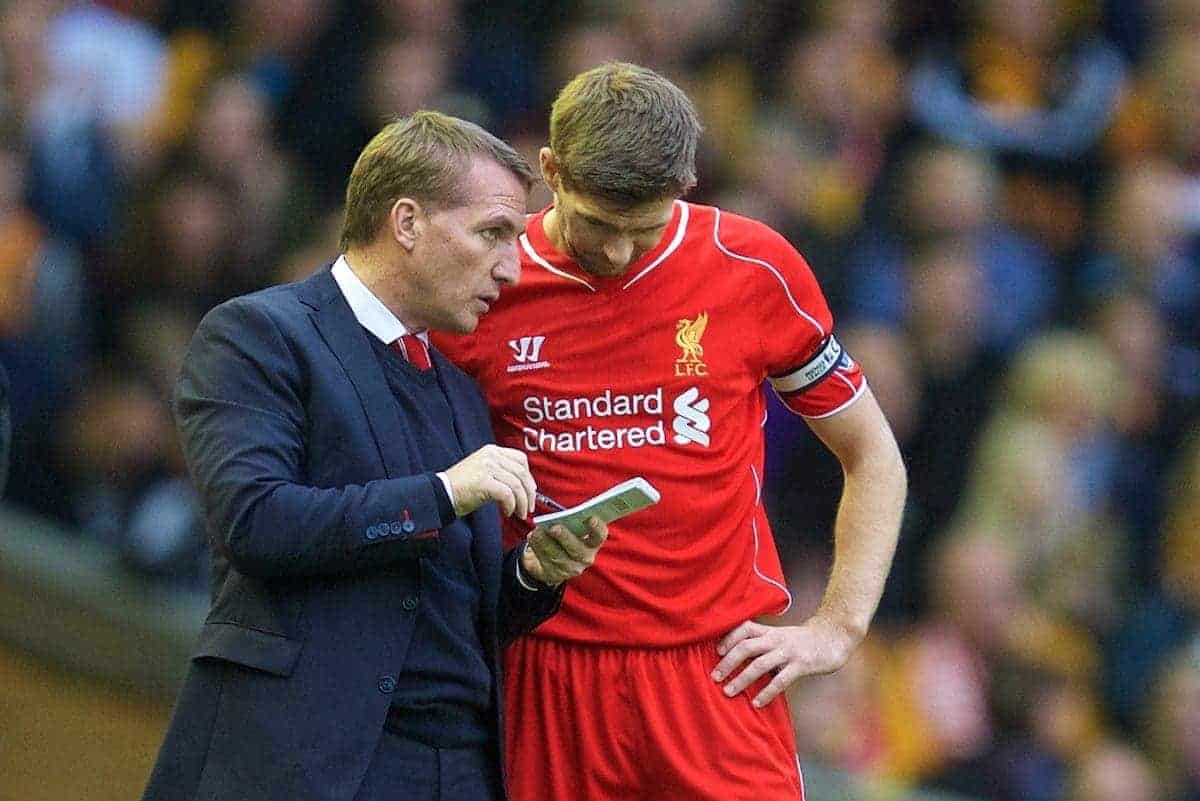 The move of Gerrard to a deeper role in midfield was seen as a gamble at the time, but proved to be just one of the master strokes that was Liverpool’s 2013/14 domestic campaign. Not since the departures of Xabi Alonso and Javier Mascherano has The Reds had a natural holding midfield player whom was capable of starting counter attacks and the use of one was integral to Rodgers’ system.

Due to the age he had become and the qualities he possesses it was a sensible choice to use him as a ‘deep lying playmaker’. What aided this change was that there was nobody else capable of playing the role and Rodgers convinced Steven that the move would extend his career. This shift in positioning brought about immediate success and it had looked like Gerrard had been given a new lease on life.

However, this success was permitted by only competing on one front last season and allowing the now 34-year-old to have adequate rest between games. Couple that with teams having to focus on the attacking threat from Suarez, Sterling and Sturridge – and Rodgers had mixed up a remedy that provided the most exciting brand of football many of us have seen played by Liverpool.

A number of contributing factors have been evident in Liverpool’s decline so far this year.

Pairing Gerrard in midfield with an engine (Jordan Henderson, Joe Allen) to do the grunt work has seemingly ceased to work. Paul Lambert exposed the weakness when he tasked Gabriel Agbonlahor to sit on Gerrard when Aston Villa visited and left Anfield with all three points last month. Since then, teams have followed that mantra, nullifying Gerrard’s impetus in the game and snuffing out the considerable threat Liverpool showed last season.

Speaking to the Daily Mail, in an interview published today, Gerrard explained:

“A couple of teams have set up to man-mark me and stifle me. Against Villa (Gabriel) Agbonlahor wasn’t remotely interested in the ball or the game, only in following me. The other one was at West Ham, but Sam Allardyce has always done that with me.

“In those two games I found it hard to influence things so I’ve had loads of chats with Brendan about how to counter that if it happens, whether it’s by moving out of position or moving further forward into a ‘10’ position.

“We did that in a recent game and it worked really well and my form has actually been a lot better since people started to try and stifle me.

“I think you will see changes in my game. Brendan and I have worked some things out.’

It is too harsh to say that Gerrard is at the root of our problems this year, but it brings to the fore the problem Liverpool and Rodgers have with the defensive midfield position – a position so crucial to the system employed by the Northern Irishman. Without the goals of Suarez and Sturridge to compensate for the distinct lack of midfield energy The Reds are considerably distant from the peaks hit for the majority of last campaign.

One question that I wish to raise is why can’t Gerrard be used as in impact substitute? He’s currently started and played every minute of every Premier League game and Champions League game this season.

I respect the man greatly and he can still perform for ninety minutes on most occasions, but we also know what sort of football he can create in the front third – notably a late cameo at the number 10 position against West Brom – so what’s to say he cannot be an effective second half substitute? The only problem is that a move as substantial as I am proposing will be seen as both risky and disrespectful to a player and man who bleeds Liverpool Football Club.

It is just a thought and a suggestion. I’m under no illusion that many readers of this may render it sacrilegious but I believe it to be food for thought. The appearance of a club captain starting on the substitute bench is perilous (this being my only significant objection to the theory), however, embroiled within a campaign whereby 7-8 clubs can finish in European positions a bold move needs to be made.