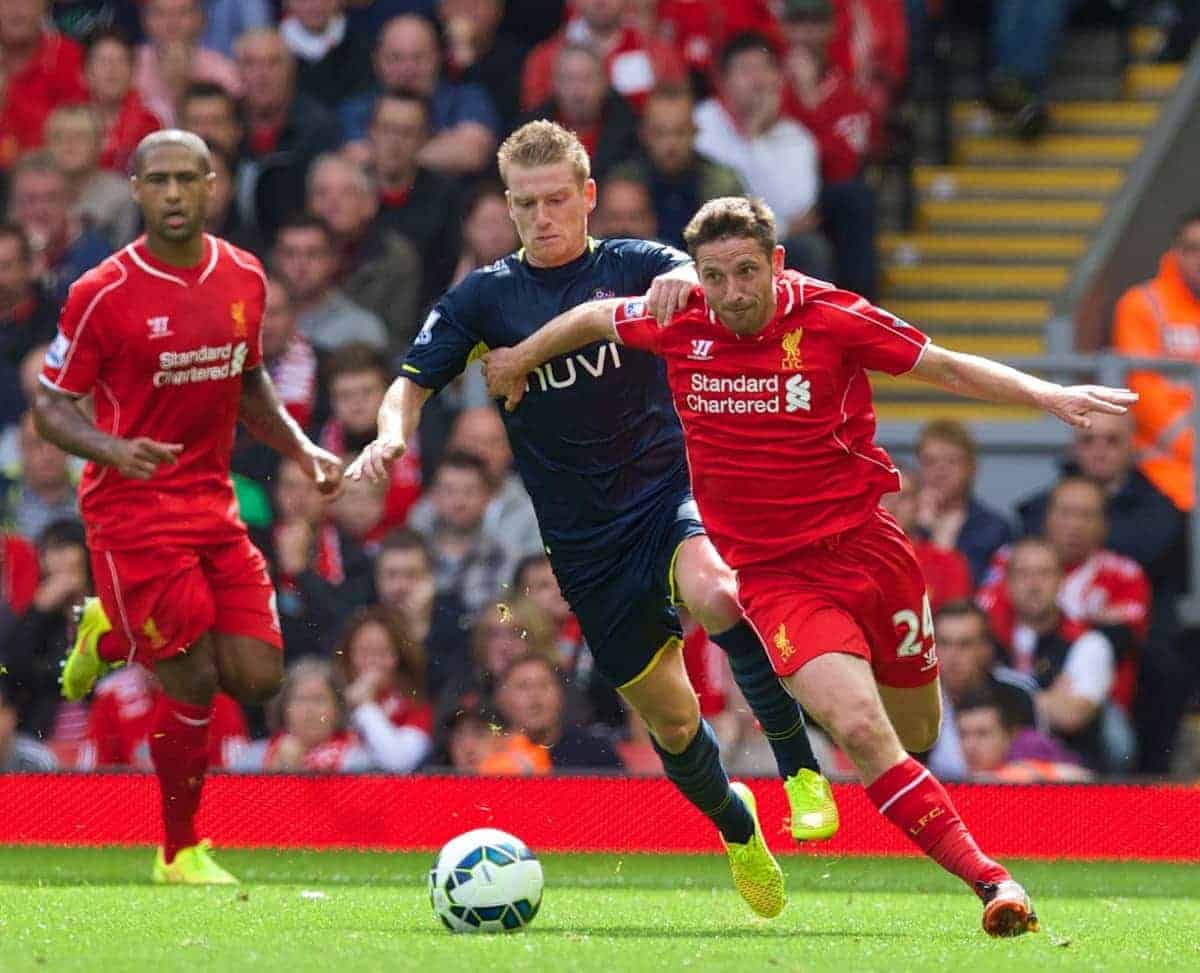 Liverpool midfielder Joe Allen shone for Wales on Sunday night, and his defensive midfield role should be utilised at Anfield, writes Jack Lusby.

In a game where the battle between Gareth Bale and Eden Hazard was set to dominate headlines, Allen’s contribution to a stoic defensive display stood out, and Reds boss Brendan Rodgers should be encouraged.

The defensive midfield role, currently filled by Steven Gerrard, could be Allen’s future at the club.

Gerrard received plentiful acclaim on his transition from roving No. 8 to an authoritative Pirlo-type under Rodgers last season, but that success seemingly wasn’t to last, and the 34-year-old has struggled so far in 2014/15.

With Liverpool’s most effective system based on a 4-4-2 midfield diamond formation, the defensive midfield role is integral.

As a regista, Gerrard must drop between the centre-backs when Liverpool attack, in order to cover for any breaks from the opposition, and contribute in breaking up any resulting play and shield the back four, as well as creating from deep, either in tandem with his supporting midfielders or with accurate long balls.

However, Gerrard often now struggles to keep up with the opposition—Oscar completely bypassing him ad nauseum in the recent league defeat highlights this—and his famed raking long balls tend to frustrate the build-up play associated with Rodgers’ system.

Allen against Belgium showed a potential replacement for Gerrard, either this season or the next—the determined Gerrard may cling on and find his form again, however implausible.

A popular myth surrounding Allen in Liverpool’s midfield is that the diminutive option lacks physicality.
An enthralling running battle between Allen and Belgium’s Marouane Fellaini on Sunday night should go some way to disprove this.

Much was made of Fellaini’s elbow on the midfielder, but Allen gave as good as he got with some tough tackling.

This isn’t an anomaly either. In pre-season Philippe Coutinho claimed: “I work with Joe (Allen) sometimes to see how he uses his body to protect the ball. He’s amazing at it.”

When the going gets tough in defensive midfield, Allen far from shirks his duties.

As mentioned, an important facet of the modern defensive midfielder’s game is in the positioning between the centre-backs when the side are in an attacking phase.

Often this is as the deepest outfield player in the side.

Williams and Chester didn’t push on as such, with Wales manager Chris Coleman’s game-plan arguably to contain Belgium and earn a vital point.

Allen’s disciplined work in filling the space between the pair when full-backs Neil Taylor and Chris Gunter inevitably advanced, however, was crucial to stymie the Red Devils’ counter attack.

In this role, and in order for Wales to carve out any chances—typically through Bale—Allen needed to provide incisive passes from deep.

The 24-year-old played long and short, in the air and on the ground, with surprising success; a disciplined and intelligent midfielder, this quality could see Allen offer a vital component within Rodgers’ midfield diamond.

As Gerrard wanes, Allen arrives as a contender for the defensive midfield role at Anfield.

Within Coleman’s side on Sunday night, Allen fulfilled his duties adroitly.

Furthermore, Allen has already excelled in this role for the Reds, in his early days at the club following his £15 million move from Swansea City in 2012, before dropping off with injury.

This season the Welshman has operated as a shuttling midfielder, covering space, closing down opponents and recycling possession. However, this Wales display shows his true potential elsewhere.

With Gerrard undoubtedly on his way out for Liverpool, and struggling particularly in this deep-lying role after several sides have targeted his diminishing energy, the captain should assume a more bit-part role in the near future—this would leave a key role open.

Joe Allen could be the player to fill that void for Brendan Rodgers in the Premier League.

Can Joe Allen be Liverpool’s future defensive midfielder? Let us know in the comments below.