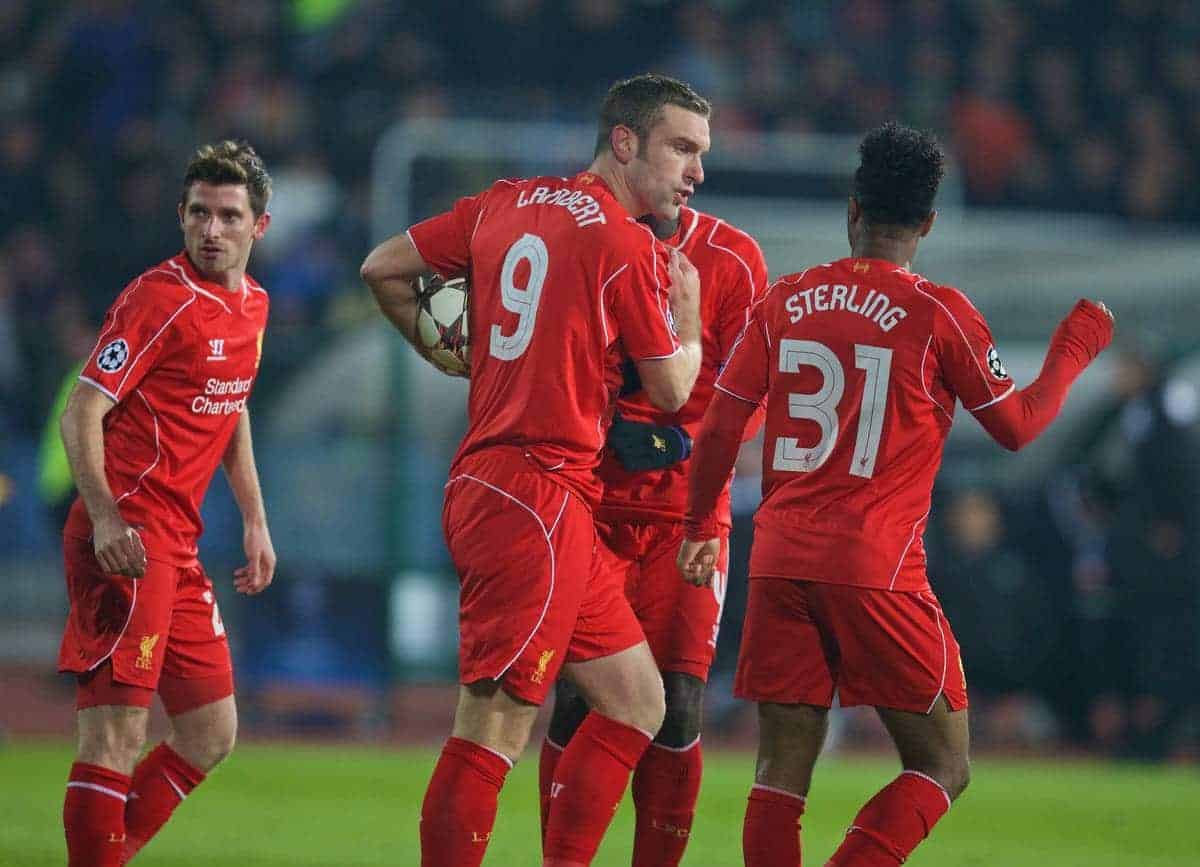 With two goals in two games on only his fourth and fifth starts for the club, Rickie Lambert has shown why he’s a better option than Mario Balotelli as Liverpool’s forward in Daniel Sturridge‘s absence.

Lambert endured a difficult first few months to his Liverpool career, but a couple of promising performances from the 32-year-old, against Crystal Palace and Ludogorets, have given definite reason for optimism.

Admittedly, these displays haven’t set the world alight, but two goals in as many games, coupled with two solid all-round performances, means that he should now be ahead of Balotelli in the pecking order when the Italian returns from injury.

Despite the Palace and Ludogorets games being disappointing results and performances by the Reds, Lambert should definitely feel happy with his input.

Balotelli has yet to convert a big chance in the CL or PL for Liverpool; Lambert has bagged two in four days.

Strikers are, first and foremost, judged on goals, and Lambert’s statistics, especially in comparison to Balotelli, make for interesting reading.

The England striker has scored three goals in 366 minutes of playing time so far this season, according to WhoScored, which is actually a far from shameful effort. Balotelli, on the other hand, has found the net just twice in 911 minutes.

That means the former Southampton man is averaging a goal every 122 minutes, compared with the Italian’s 455.5. That is a sizeable difference, and goes some way to showing why Liverpool have been so ineffective in attack with Balotelli playing.

Lambert also has three assists to his name, while Balotelli has none. This highlights the former’s unselfishness and intelligence in the final third, bringing others into play far more effectively.

The 32-year-old’s prowess in the air is also far superior to his teammate’s, winning 2.2 aerials duels per game compared to Balotelli’s 0.9. According to Squawka, Lambert has won 50 per cent of his duels in general, while the 24-year-old has come out on top a measly 36 per cent of the time.

Some of Balotelli’s supporters feel he offers better movement off the ball than Lambert, but can you really imagine him making the intelligent run Lambert did against Palace on Sunday for his goal? It’s more likely that he would have been static, expecting an inch-perfect pass to land at his toes instead.

Another key difference between the two is their on-pitch demeanour and team ethic. Lambert is hard working and positively encourages others around him.

Balotelli, on the flip side, is a player you never feel truly cares about who he’s playing for. Yes, sometimes his naturally sulky attitude works against him when he’s actually trying hard, but he’s seemingly still had a negative impact on the side.

Sky Sports pundit Gary Neville was asked whether Lambert should now be picked ahead of Balotelli in Sky’s post match coverage and had no doubt about who he thinks should be starting out of the two.

“He (Lambert) should be playing 100 per cent in front of Balotelli. He played the ball off to his teammates three or four times and made a few movements.

“The Liverpool players will want Rickie Lambert in the team, because he’s someone to play off and make movements. He deserves to keep his place. He brought people into play and showed a good touch.”

“He needs to be playing regularly. Maybe not against the elite, but in your run-of-the-mill games he should have had more opportunities. He’s a goalscorer and can hold the ball up.”

Lambert, who made 37 appearances for Southampton in the Premier League last season and all 38 the season before, is a player who clearly benefits from playing regularly rather than as a bit-part or impact player. Yet nine of his appearances so far under Rodgers have been as a sub late on in games.

Brendan Rodgers does, of course, have the option of playing the two strikers alongside each other in a 4-4-2 diamond, once Balotelli returns from injury. This would suit both players, who are at their happiest with a partner alongside them.

Balotelli showed potential alongside Sturridge in the 3-0 win over Tottenham in August, but in fairness to him, he has been mainly used as a lone striker from that point on.

Lambert, meanwhile, doesn’t have anywhere near enough mobility to lead the line by himself, and his hold-up play and underrated creativity would be a good foil for the Italian’s more risky, impulsive style.

It seems baffling that Rodgers has only given them a chance alongside each other late on in the 0-0 draw at home to Hull – a game which saw Lambert’s introduction alongside Balotelli spark a flat performance into life.

It would be foolish to denounce Lambert as the answer to Liverpool’s current problems, just as it would be unjust to write Balotelli off completely, but as it stands the Englishman must be Rodgers’ first-choice striker without Sturridge around.

He has justified his selection in the last two games, and has shown enough quality to suggest he can continue to improve the more his confidence increases. Playing him and Balotelli together is also a viable option.

That nightmare start to life at Anfield for Lambert is now slowly turning into the dream move he imagined it would be back in the summer. There’s still a long way to go though.