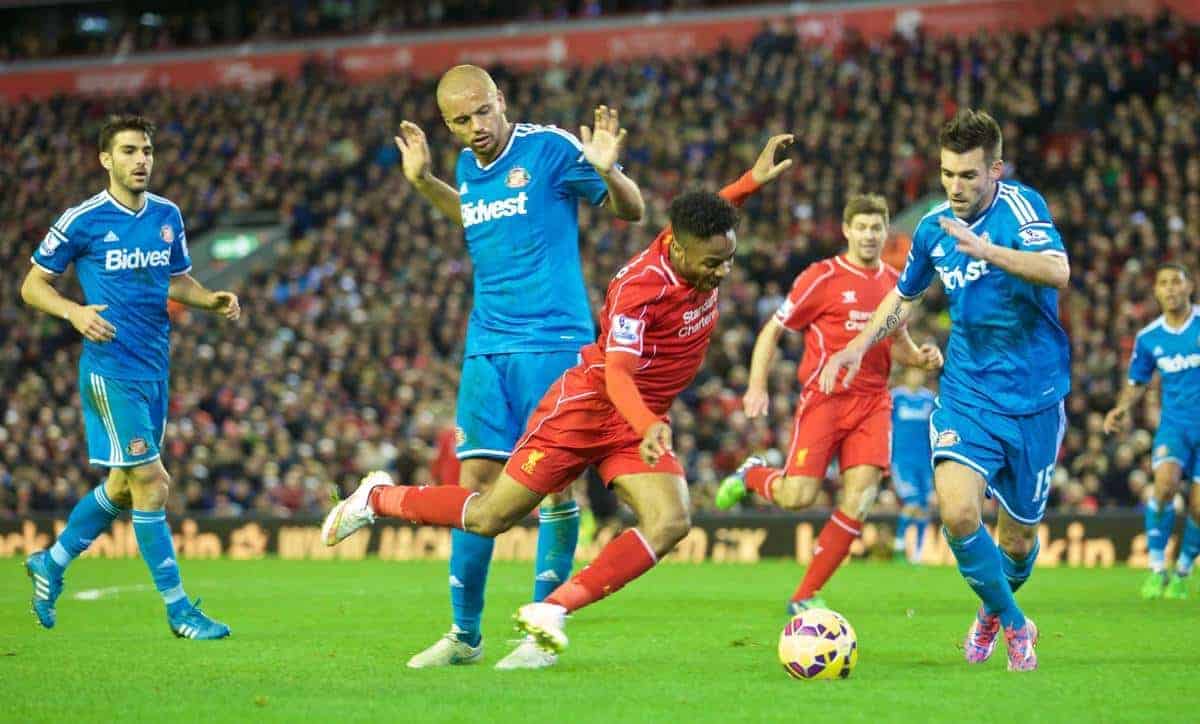 Liverpool were held to a frustrating goalless draw against Sunderland at Anfield on Saturday, as their stuttering Premier League season continues.

Brendan Rodgers made two changes to the side that beat Leicester City on Tuesday evening, as Liverpool looked to win their third Premier League game in a row.

Alberto Moreno came in for Javier Manquillo, with Glen Johnson switching to right-back in order to occupy the Spaniard. Philippe Coutinho replaced Steven Gerrard, who was seemingly being kept in reserve for next week’s Champions League showdown with Basel.

The Reds were playing a 4-3-3 formation, with Coutinho at the top of a midfield three and Raheem Sterling and Adam Lallana either side of Rickie Lambert.

Connor Wickham had an early penalty claim turned down, while at the other end Johnson and Lallana just failed to combine in the Sunderland penalty area. It was a fairly low-key start though, and Anfield was rather hushed.

The visitors certainly weren’t lacking ambition, and were enjoying the better of the ball. Jordi Gomez fired wide. There was a growing sense of frustration among the home faithful. After 20 minutes, Gus Poyet’s side had enjoyed 62 per cent of possession.

Lambert headed wide after excellent work by Lallana, and it was comfortably Liverpool’s best opening of the game. Minutes later, Coutinho’s effort from the edge of the penalty area was comfortably stopped by Costel Pantilimon.

Wickham again appealed for a penalty, having claimed to be tripped by Lucas Leiva, but his protests were waved away by Neil Swarbrick.

Former Manchester United defender Wes Brown headed a wonderful chance over the bar seconds before half-time, but at the break it was goalless. It hadn’t been pretty.

There were no changes at the break, despite rumours of Coutinho struggling with a hamstring problem at the end of the first-half.

Gomez’s long-range effort deflected wide two minutes after the restart, and the Black Cats started the second-half confidently. Wickham twice shot just wide, and the Reds could easily have been behind.

At the other end, Sterling drilled a wayward effort into the Kop, and Liverpool were not looking remotely threatening. Jordan Henderson‘s poor free-kick on the hour mark pretty much summed up their limp performance.

Sterling teed up Lucas, but his 30-yard effort didn’t really trouble Pantilimon, while a below-par Coutinho fired over. Rodgers’ men were really starting to dominate as the game reached its final quarter. Gerrard came on for Lallana after 67 minutes.

Coutinho’s effort was blocked by Liam Bridcutt, and with 15 minutes remaining, Liverpool still couldn’t find a way through. A magnificent mazy run by Sterling eventually saw the ball fall to Coutinho, but Pantilimon denied the Brazilian.

Sterling appealed for a penalty, Henderson shot wildly wide and Lazar Markovic almost pounced. It was a frantic finale, as the Kop tried to suck the ball into the net.

It was to no avail, however, and as the final whistle blew, Liverpool had dropped two more points in what is becoming an increasingly frustrating season.