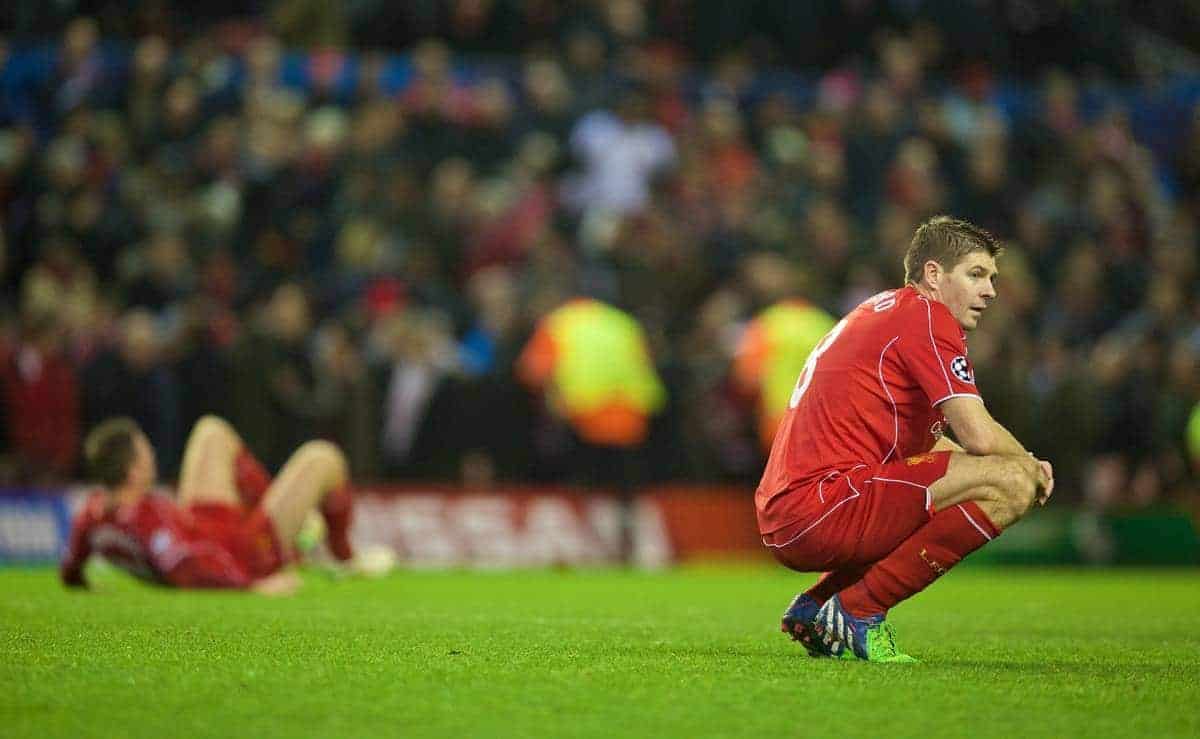 Liverpool’s Champions League dreams are over, following a 1-1 draw with Basel at Anfield. It was a wretched night from start to finish.

A huge game awaited for Liverpool at Anfield, with the Reds knowing only a win over Basel would see them qualify for the Champions League knockout stages.

Brendan Rodgers made four changes to the side that disappointingly drew 0-0 with Sunderland, with Jose Enrique, Dejan Lovren, Joe Allen and Steven Gerrard recalled at the expense of Alberto Moreno, the injured Kolo Toure, Philippe Coutinho and Adam Lallana.

Anfield was at its atmospheric best, and a night similar to that unforgettable evening against Olympiakos a decade ago was called for. The Reds started with a 4-2-3-1 formation, with Henderson on the left and Raheem Sterling on the right.

Gerrard clipped a harmful effort into the hands of Tomas Vaclik and Henderson fired harmlessly over in the first few minutes, but there were definite signs of nerves among the Liverpool players.

Shkelzen Gashi shot over after hesitancy between Martin Skrtel and Glen Johnson, and the in-form Swiss outfit were looking threatening. Defensively the Reds looked woeful, and minutes later Basel were in front.

Fabian Frei fired a terrific strike into the corner of the Kop net after 24 minutes, and Liverpool needed two goals to go through. They had been appalling, quite frankly. Rodgers’ men tried to rally, with Sterling shooting tamely at Vaclik, but if anything it looked more likely that Basel would get a second. Marco Streller had a glorious chance to do just that in the 33rd minute, but volleyed wide.

Fabian Schar saw his effort blocked by Johnson, and Gashi had a goal ruled out for offside, and they were final acts of note in a horrible opening 45 minutes for Liverpool. The formation had not worked at all, and the passing had been as we’ve seen for a long, long time. Changes were needed at the interval.

Rodgers made two substitutions at the break, with Alberto Moreno and Lazar Markovic coming on for the awful Jose Enrique and ineffective Rickie Lambert. There was immediately more urgency about their play.

Despite having more of the ball, Liverpool still simply couldn’t create anything of note. Markovic, who added a real spark, saw an effort blocked. Taulant Xhaka shot inches wide.

On the hour mark, the Reds’ night went from bad to worse. Markovic was sent-off for throwing an arm, and it seemed extremely harsh. It was all but the final nail in Liverpool’s coffin.

Skrtel’s decent long-range effort flashed wide, but there was suddenly a flat feeling around Anfield. Gerrard nearly won a penalty, but it was good piece of goalkeeping by Vaclik. The skipper then shot harmlessly wide in the 73rd minute.

After 81 minutes Liverpool were given hope. Gerrard’s sensational free-kick curled in off the post, and the Reds had nine minutes to save themselves. Rodgers threw Skrtel up front as The Reds went in search of the goal they needed.

Luca Zuffi forced Mignolet into a smart save, and at the other end the ball almost ricochet into Basel’s net off a defender.

It wasn’t meant to be though, despite last-gasp efforts from Skrtel and Henderson, and Liverpool were out of the Champions League in the group stages. The Europa League now awaits.

In truth, if you can’t qualify from a group containing Ludogorets and Basel, you don’t deserve to go through. Another bitterly disappointing evening on Merseyside.