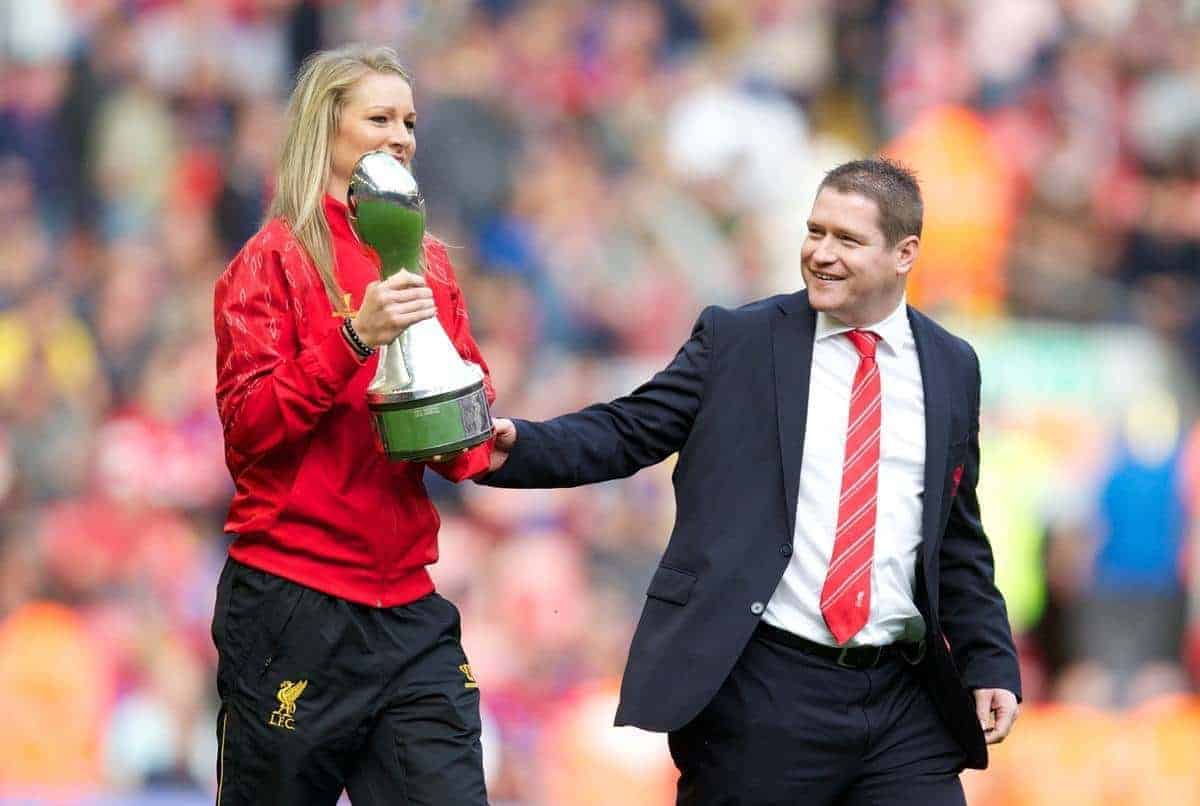 Since lifting the Women’s Super League title on Sunday 12th October, Liverpool Ladies remained in training until late November. An end of season awards ceremony seen Becky Easton crowned the official supporters Player of the Year, while Katie Zelem and Fara Williams picked up Young Player and Managers Player of the Year respectively.

While the first team season has ended, the Development Squad are in full flow and unbeaten going into their mid-season break and the transfer window has also opened – already seeing a number of players leaving the club.

At the end of the season it was announced that American midfielder and Liverpool vice-captain Amanda Da Costa would be leaving the club to return to the American league. Da Costa was a hub of creativity in the reds midfield and will be sorely missed, Liverpool’s loss is Washington Spirit’s gain and the play maker will slot perfectly into their midfield.

Lucy Bronze and Gemma Davison have also left Merseyside, Bronze moving to local rivals Manchester City and Davison down south to Chelsea Ladies. Like Da Costa, Bronze spent 2 title winning years on Merseyside and the reds will miss her rampant runs forward from right-back. Davison was at Liverpool just 12 months, making 21 appearances, scoring 6 goals and assisting 5 in the league.

Good luck to all 3 in their future careers.

While supporters were left disappointed following the departures of 3 first team players, rumours are swirling around as to who will be replacing them.

In the last week it has been announced that Corina Schroder, Nicole Rolser and Katie Zelem have all signed new contracts and will definitely be playing in the red of Liverpool next season.

With the news of Lucy Bronze’s departure, when England women’s historic friendly at Wembley against Germany came around Liverpool had just one representative in the squad – most capped England international of all-time Fara Williams. Natasha Dowie and Gemma Bonner missing out on the final squad.

Williams started in front of the 45,000 strong crowd and went close to scoring after expertly controlling the ball at the edge of the area and volleying it goal-wards – the strike was dipping but too close to the keeper and England fell to a 3-0 defeat.

For England manager Mark Sampson this was the biggest test of his managerial career so far, the Germans place 2nd in the world rankings and are amongst the favourites going into next summer’s World Cup in Canada.

While the result was disappointing, it was fantastic to see such interest in a women’s football match and hopefully the effort put into promoting the game will help to increase crowds for the Women’s Super League next year.

While the first team games are finished for the year, Liverpool Ladies Development Squad play their season from September to May with a 2-month break in December and January. This season they have a new coach in U17s FA Youth Cup winner Matty Campbell and are currently thriving under his leadership.

Since opening their campaign on Sunday 21st September with a 3-0 win over last season’s champions Sunderland Ladies, Liverpool have embarked on an unbeaten run of 10 games – winning each game in the league and cup, scoring 47 goals and conceding only 2.

Ashley Hodson is their top scorer with 14 goals in 7 games, including an impressive 4 hat-tricks. Hodson is one of a trio of players who has clearly benefited from her time spent in and around Liverpool’s first team, with Claudia Walker and Hannah Dale also noticeably improving as all-round performers.

In November Liverpool convincingly beat Manchester City and Sunderland Ladies at home in the league before hammering Durham WFC 10-0, the difference in fitness levels between the 2 sides distinctive during the final 15 minutes in which the reds put 5 goals past their visitors. Hodson captained the side on the afternoon in the absence of Shannon Beckwith, scoring 4 and assisting 2 during the rout.

For their final game before the break Liverpool were away at Aston Villa, racing to a 4 goal lead before the home side pulled one back. The game finished 6-1 with Liverpool comfortable leaders at the top of the Development League table going into the mid-season break.

For a more in-depth look at their season so far: Mid-Season Review

This will be my final round-up for Liverpool Ladies in 2014, thank you to everyone who reads and make sure you are following my @LFCladiesfans twitter for news between now and the end of January!