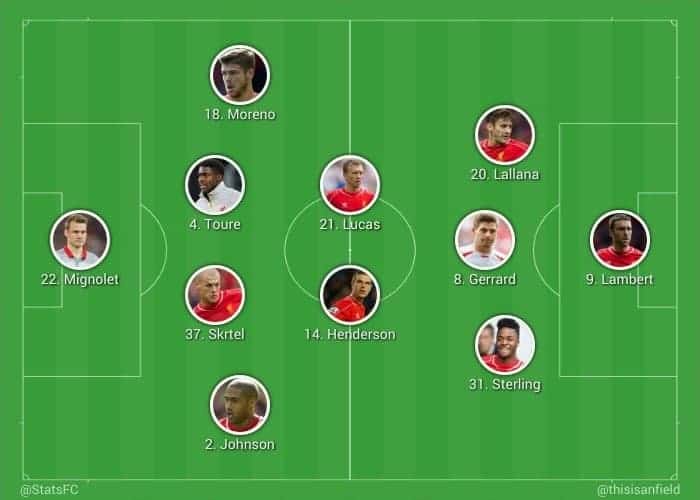 Brendan Rodgers’ Liverpool head to Leicester City on Tuesday night looking to record back-to-back league wins for only the second time this season in their first fixture of a hectic month. Will Steven Gerrard get back into the side?

Liverpool successfully put an end to five games without tasting victory in all competitions thanks to Glen Johnson’s late winner on Saturday afternoon, bu Rodgers and his team have little time to rest with a trip to ‘The King Power Stadium on Tuesday night.

The match in the Midlands will be the first of a hectic month for Liverpool – who play eight games and are already coming off the back of three fixtures in a week – and with matches coming thick and fast, a crucial period of the season awaits with a real chance for the team to build up some form and spring into life.

Momentum could prove key to battling through the congested fixture list and after an extremely testing period, it is important that the side continue to move forwards following Saturday’s positive result; backing it up with another against the Premier League’s bottom side who have won once at home all season.

With the game being the fourth in ten days for Liverpool, Rodgers will once again have to rotate his side in a bid to keep players as fresh as possible – something that will be prevalent before the turn of the year – and as expected, there will be some tough decisions to make for the Reds manager.

Injury is still preventing a return to the set up for latest victim Mario Balotelli, as well as long-term absentees Jon Flanagan, Suso and Daniel Sturridge, but despite making a comeback to training Mamadou Sakho is still not fit to feature.

Rodgers finally showed that he was aware of Steven Gerrard’s inability to now play three full matches in a week as he rested the captain on Saturday, but the Liverpool boss now has an interesting dilemma as to whether to put him back into the starting XI.

The Reds recorded a much welcome clean sheet with a back four that very few would have predicted could keep one and also thanks in no small part to some important saves made by the much maligned Simon Mignolet, who received an ovation from the Kop after the final whistle.

Despite the improvement, there were still some largely unproductive performances from some of those who made up the defensive line, and the Liverpool boss should consider changes ahead of Tuesday in both of the full-back positions where Javier Manquillo and Alberto Moreno can come in.

In midfield, Lucas Leiva and Joe Allen performed solidly in the skipper’s absence, but with the Welshman having featured heavily in recent games and the Brazilian playing back-to-back 90 minutes for the first time this season, changes could materialise with Gerrard and Emre Can both ready and waiting.

Liverpool’s attack looked far more dangerous in the second half last time out, with the pace and intricacy of Raheem Sterling, Philippe Coutinho and Jordan Henderson supporting the impressive but exhausted Rickie Lambert, and alternatives are available to Rodgers in the form of Lazar Markovic, Adam Lallana and Fabio Borini to provide rest for those that need it.

Line up options are aplenty for the Reds boss with a strong squad available at his disposal, and the quick turnaround between matches means he must make changes.

As seen throughout the season to date, Rodgers has preferred to line up with a 4-2-3-1 shape – something that has hindered the side at times – and with that in mind, this is how I expect the Liverpool manager to line up against the Premier League‘s bottom side: However, with Gerrard’s introduction against Stoke, Rodgers altered the shape of his side to a 4-3-3 formation and with his team going on to emerge victorious at the final whistle, he could be tempted to stick with the more suited set-up. If he does, Liverpool should look like this come kick off: Putting an end to a miserable run of form with a hard fought win means now is the perfect time for Liverpool to put a hugely frustrating season to date behind them, and begin to move forwards with a new found positivity, starting against the Premier League newcomers.

It will be far from an easy fixture against Nigel Pearson’s struggling Foxes, but it’s certainly a match that The Reds must come out of with three points to show for ahead of what is another winnable fixture on Saturday at Anfield against Sunderland, as Rodgers and his side look to get their season back on track.