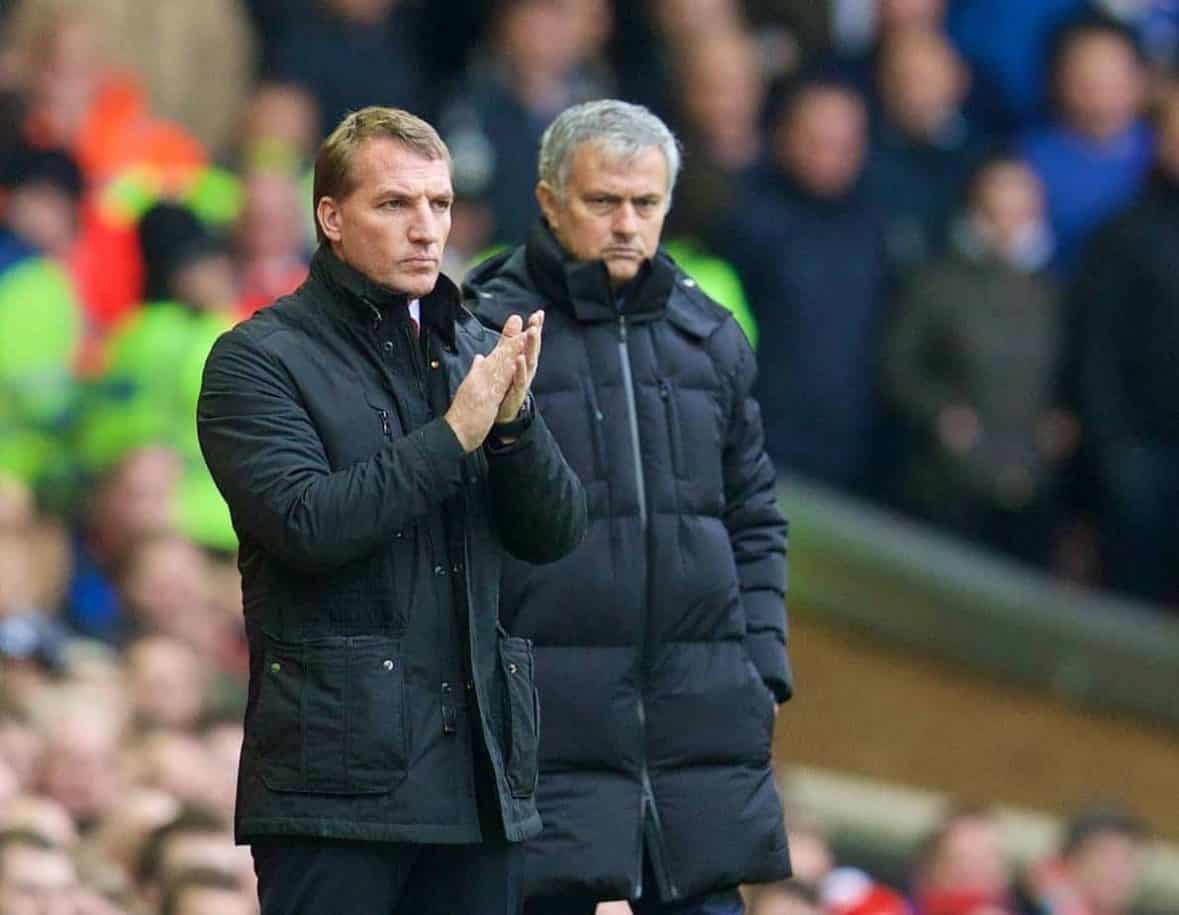 Liverpool face old adversaries Chelsea in the League Cup semi-final first leg on Tuesday, and Brendan Rodgers must stick with the majority of the team that has been so successful of late.

Ever since Jose Mourinho’s arrival at Stamford Bridge in 2004 there has been real needle between Liverpool and Chelsea. Both have enjoyed memorable and miserable days against one another, and there is a genuine dislike between both clubs that shows no sign of going away any time soon.

Tuesday’s semi-final first-leg clash at Anfield is the latest chapter in a fascinating decade’s worth of tussles, and it is an extremely difficult tie to call.

On one hand, Liverpool are revitalised, losing just one of their last 14 matches, but on the other Chelsea remain the best side in the country, and their 5-0 demolition of Swansea on Saturday outlined their pedigree.

Historically, Mourinho takes the League Cup far more seriously than some managers, seeing it as a great chance to get a trophy in the cabinet early on.

With a straightforward FA Cup tie at home to Bradford on Saturday, there is every chance the Portuguese will pick close to his strongest starting eleven against the Reds.

Rodgers can be a difficult man to predict at times when it comes to his team selection, but he would be wise not to switch things around much at all against the Blues.

Since the 3-0 defeat at Old Trafford in the middle of December, the Reds are unbeaten in all competitions, with numerous individuals impressing in that time.

Mamadou Sakho and Emre Can have been terrific in a back-three since coming into the side, neither featured against United, and their reintegration has seen Martin Skrtel improve hugely too, as explained recently here.

Lazar Markovic has started to show exactly why the club paid £19.8 million for his services last summer – thriving in his wing-back role on either side.

Lucas Leiva is a man re-born, and his importance to the side in the middle of the park cannot be underestimated. His unbridled joy following Rickie Lambert’s goal against Aston Villa on Saturday shows just what it means to him to play for Liverpool, and he brings much needed experience and leadership.

Jordan Henderson is getting back to his best, Philippe Coutinho has been vastly improved since the switch to 3-4-2-1, and Alberto Moreno is showing increasing signs of promise.

Rodgers simply has to stick with a large percentage of these players against Chelsea, or risk losing the momentum that has gained pace since the aforementioned defeat at Old Trafford.

There have been plenty of examples of in-form teams being disassembled for a cup tie, only to lose and see their season come to a halt because of it.

It was something Rafa Benitez was often guilty of during his time in charge at Anfield, and while resting players is clearly important, doing it at the wrong time can be costly. You don’t see players complaining of tiredness when they are winning week in, week out.

Last season, Liverpool were fortunate enough to have a little bit of luck with injuries in the second-half of the campaign, and it was a piece of cake predicting their team every week.

Of course, the fact they were only playing once a week helped in that respect, but they would never have won 11 games straight had Rodgers chopped things around too much.

This stability is huge for any side, and you only have to look at Tuesday’s opponents as the perfect example of this.

Branislav Ivanovic, Gary Cahill, John Terry, Cesar Azpilicueta, Nemanja Matic, Cesc Fabregas, Oscar, Eden Hazard and Diego Costa have been virtual ever-presents all season, and it is a big reason why they are top of the league.

Arsenal‘s ‘Invincibles’ and United’s sides of the 1990s and 2000s were exactly the same, while Benitez had the most success when he rarely made changes to his brilliant 2008/09 team.

With a winnable game against Bolton Wanderers looming in the FA Cup on Saturday, in which only a few extra changes should be made too, there is no reason why Rodgers should feel the need to alter his team much against Mourinho’s men.

It would be foolish to suggest Rodgers make no adjustments to his team on Tuesday, of course, and there are a few options he should consider.

Markovic, for all his excellence of late, should be replaced by Javier Manquillo at right wing-back. The threat Eden Hazard will pose out on the left requires a proper full-back up against him, and it would be a huge risk playing the young Serb in that role.

It’s one thing holding your own in that area against the likes of Burnley, Sunderland and Villa, but facing one of the world’s finest wingers is another challenge all together.

Manquillo might not be the most exciting player around, but he has shown his quality defensively on plenty of occasions this season.

Steven Gerrard should also come back in if fit. We all know the skipper isn’t the force of old, but nights like this are made for him. His physical stature is needed against an extremely powerful Chelsea side.

The 34-year-old’s form has been good in the last few weeks, and he could thrive ahead of Lucas and Henderson in his preferred attacking midfield role. Playing Markovic there, with Gerrard starting on the bench, is another possibility.

This would then mean moving Raheem Sterling up front in place of Fabio Borini. The Italian will always give his all, but he doesn’t have any attributes that will remotely frighten Chelsea‘s formidable back-line on Tuesday. Sterling’s pace and movement will, however.

The returning Adam Lallana could potentially come in for Coutinho, in order to give him a rest, but it would be risky given the Englishman’s likely rustiness and the Brazilian’s sparkling recent form and all-round influence.

Chelsea are understandably strong favourites to progress in the tie, but Liverpool’s excellent run of form means they are more likely to upset the odds than when they faced them with no confidence in November.

It is imperative Rodgers sticks with the nucleus of the side that has brought so much positivity in the last month or so, rather than breaking up a winning team.

The impressive back-three must stay in tact – changing from the 3-4-2-1 would be an error – and influential figures like Lucas, Henderson and Coutinho also need to keep their places.

It may be a night that ultimately ends in disappointment for Rodgers’ men, but it will only have a knock-on effect if he needlessly gambles with his team selection.