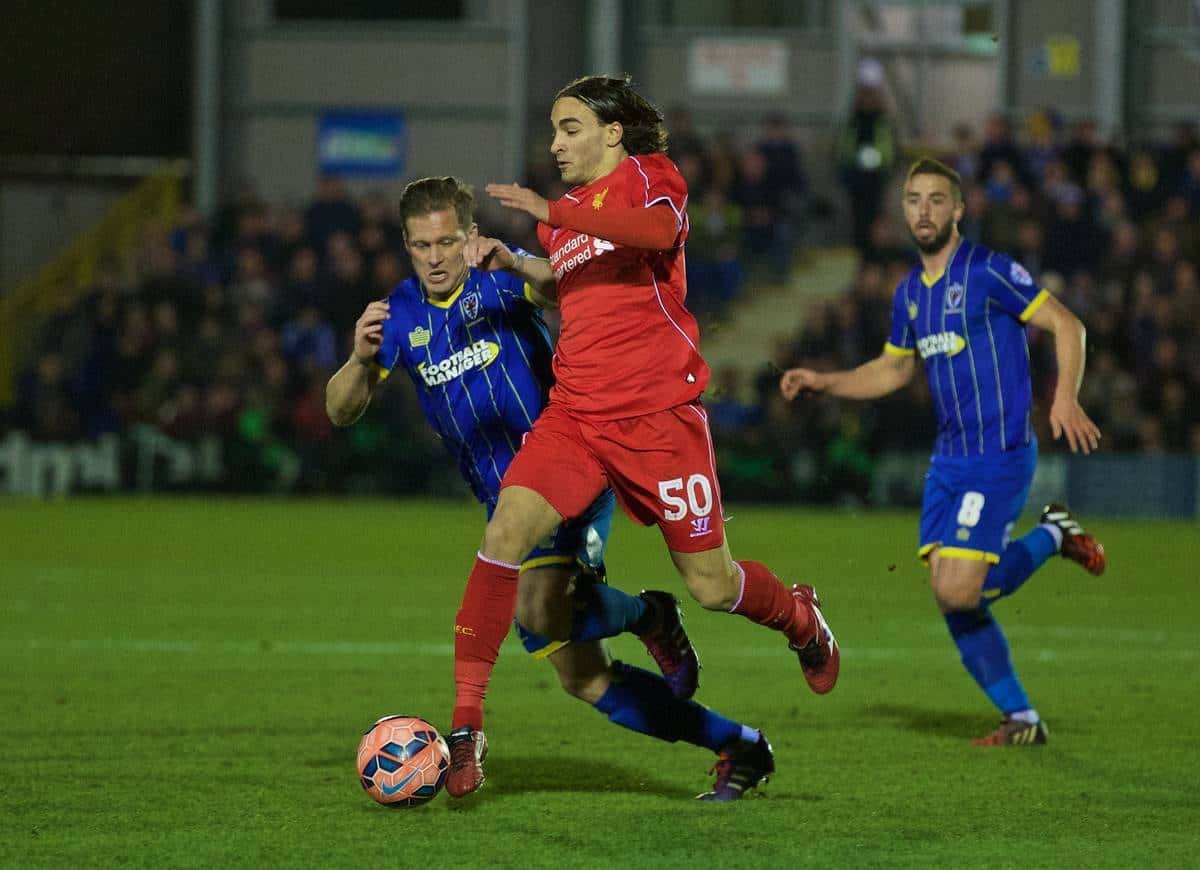 Following Liverpool’s nervy 2-1 FA Cup success against League Two side Wimbledon, Ben Twelves picks out a number of discussion points from the fixture that proved to be a tough night for the Reds. Liverpool cemented their place in the fourth round of the FA Cup where they’ll take on Championship side Bolton, after overcoming Neal Ardley’s battling side at Kingsmeadow on an uncomfortable night for Brendan Rodgers’ Reds.

Steven Gerrard was once again the man for the occasion as he scored twice and produced the goods at key moments, but Liverpool fell foul to the same problems as they were pegged back after Adebayo Akinfenwa bundled home following Simon Mignolet’s bad flap at a corner inside his six yard box.

Rodgers’ men had to be resilient and stand up to a physical challenge against the Dons looking to rekindle the team spirit of yesteryear and the Reds did, meaning Liverpool have tasted defeat just once in the last 12 games in all competitions.

It was far from a convincing performance from the strong team named by the Liverpool boss, but Rodgers’ team completed the task set and arrive in the next stage of the prestigious competition. Here are five discussion points from the clash.

In an unconvincing performance, it was once again Gerrard who stepped up to the occasion to guide the Reds through to the next round of the competition with two well taken goals.

The inspirational captain arrived in the box reminiscent of bygone years to head Liverpool into the lead from Javier Manquillo’s dangerous cross, before later heading off the line to keep the score level down the other end, and the 34-year-old planted a trademark free-kick into the top corner with what proved to be the match winner.

Seeing Gerrard further up the park and allowing for Liverpool to operate with a more mobile midfield was certainly a refreshing change from the static centre seen against Leicester last time out, and the Skipper must be utilised in a more advanced role – where his presence is still a cause for concern for opposing sides – for the remainder of his Anfield career.

Lacklustre Lambert ahead of Balotelli

Rickie Lambert made his return to the starting line-up after a spell amongst the substitutes and the 32-year-old showed nothing on Monday night that should see him keep his place for upcoming fixtures.

The England man – while isolated at times – offered no movement in attack, was completely outfought by the Wimbledon defenders subsequently squandering possession throughout and provided no goal threat – epitomised with an extremely poor effort when placed one-on-one with Dons’ ‘keeper James Shea, who saved easily in the 67th minute .

Lambert though. We didn't play to him, he couldn't get involved, but didn't do it himself either. No mobility again.

Mario Balotelli replaced the lethargic Lambert after 79 minutes and showed in the remaining 14 minutes of the fixture that he should still be an automatic selection ahead of the man he came on for – showing signs of link-up play with Gerrard and almost nicking a third goal in the process.

Balotelli done more in 2 mins than Lambert did in 80!! #LFC.

The January transfer window is now open of course, and it could be that the Italian was left on the bench by Rodgers in another attempt to send a message to £16 million summer signing that his future is far from certain – by excluding him from the starting XI – adding to leaving him out of the match-day squad completely against Leicester.

The experienced Brazilian produced an assured display in the heart of the midfield battle against the fourth division side – standing up to the physical challenge where others struggled.

While limited in certain aspects of his game, Lucas did the ugly things well, winning the ball back on a number of occasions throughout the 90 minutes and mopping up well in the centre of the park as Jordan Henderson attempted to put his energy to good use.

Lucas has had a good game for Liverpool. So to Sakho and Coutinho once more.

The 28-year-old’s inability to cover ground quickly allowed him to primarily anchor in the middle of the difficult pitch, and the combination alongside Henderson worked well for the second time in three games when the pair have formed the midfield partnership – something that should be kept for Saturday’s trip to Sunderland.

Occupying a left wing-back role again after coming back into the side for Alberto Moreno, Lazar Markovic produced a good performance proving a threat throughout, though the young Serbian’s finishing needs improving.

The 20-year-old never hid on a tough night, showing bravery in possession throughout, and he demonstrated on a number of occasions the excitement and directness he can bring to the team with his running with the ball, that caused problems for the home side all evening.

Markovic effortlessly glided past the opposition a number of times, but his finishing was erratic on occasions and poor at others – especially in the second half when he had the opportunity to seal the game under little pressure in the Wimbledon box, but Shea read his near post effort.

Glorious opportunity spurned by Lazar Markovic with Liverpool players queuing up to put the game beyond Wimbledon.

It was a positive performance from the Serbia international and he has certainly staked his claim for a starting berth again on Saturday.

It’s a new year but the same problems continue for Simon Mignolet who endured another uncomfortable night in goal in Brad Jones’ absence.

Great save by Mignolet earlier. But that flap shows why he’s a liability.

The Belgian goalkeeper showed the good and the woefully bad within seconds of each other as he pulled of a fantastic reaction save from Sean Rigg’s powerful strike to keep the scores level, before flapping at a corner showing no command of his area and allowing Akinfenwa to poke the ball home from inside the six-yard box.

Game sums up Mignolet; great reactive save but poor in every other aspect.

Mignolet then made an extremely brave block in the dying seconds to prevent the home side finding a late equaliser much to his credit, but with the January transfer window now open, signing a new ‘keeper to replace the Belgium international must be a priority this month for Rodgers and the transfer committee.

They've made hard work of it but a no doubt battered and bruised Liverpool are into the 4th Round. Phew!

Next up for Liverpool is a trip to Sunderland on Saturday and the Reds will be looking to get their top four challenge back on track.