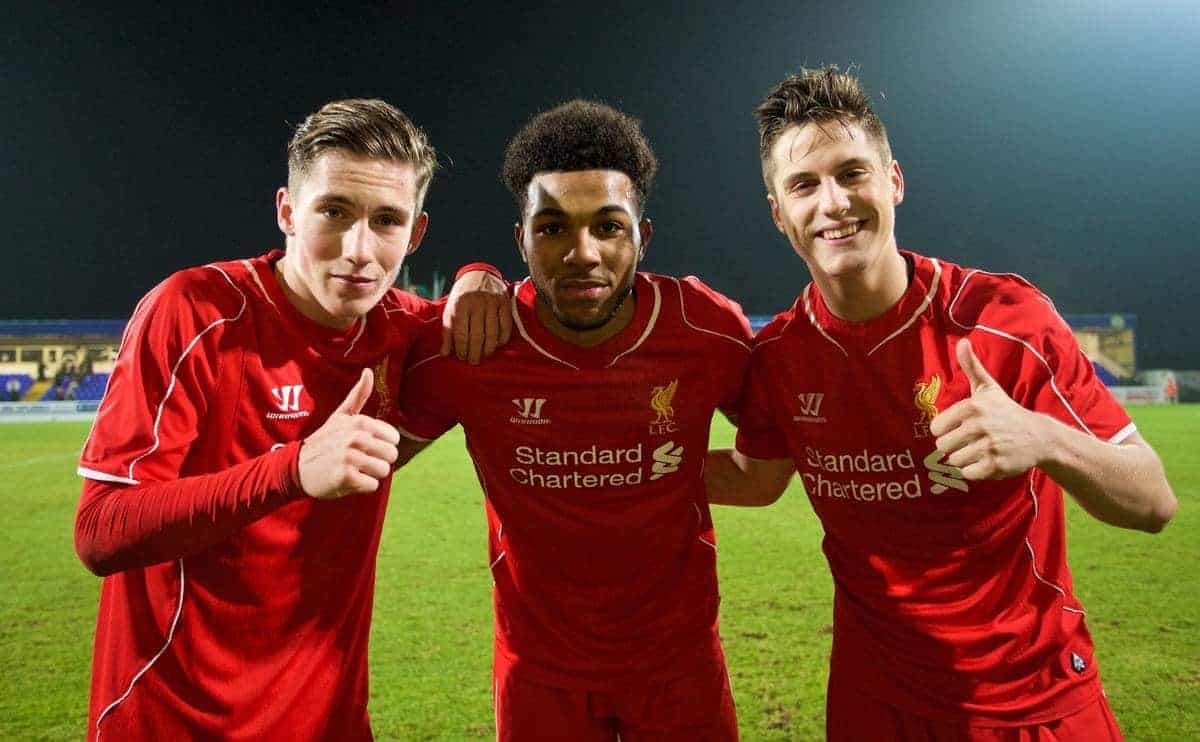 Two goals each for Harry Wilson and Jerome Sinclair, plus one for Sergi Canos, gave Liverpool an emphatic 5-2 win over Derby County in the FA Youth Cup. PJ Vaughan provides his match report.

Liverpool U18s advanced to the fifth round of FA Youth Cup after a 5-2 win over Derby County at Deva Stadium on Wednesday Evening. It may have sounded like an easy win for the Reds but Derby were very good at times especially in the first half.

The U18 have struggled defensively all season. They had lost 6-4 at the weekend in the U18 league and their previous encounter with Derby County was a 5-5 draw. Liverpool have the fourth worst defensive record in the two academy divisions. Luckily they have the second best offensive record behind Chelsea.

Prior to the match Neil Critchley the Liverpool U18 boss asked his side to be more defensively composed and rigid. Liverpool lined out in a 352 formation with Sheyi Ojo and Sergi Canos as the two wing backs. Liverpool got off to a great start when Harry Wilsons clever free kick hit the post before rebounding to Jerome Sinclair who converted a fairly simple chance.

Liverpool however failed to take control of the game, instead they were the architects of their own misfortune when they needless gave away possession in their own half that lead to a goal and a penalty to Derby County.

Liverpool were fortunate not to be behind and down to 10 men when it Pedro Chirvella made a goal line clearance with his hand. Luckily the ref did not see it but he did see a foul when Mo Adams fell from an Andy Firth challenge a second later.

Andy Firth made an excellent penalty save and then made another fine save from the result corner to ensure Liverpool didn’t go behind.

Ojo slowly grew into the game and when he did he caused the Derby County defence nightmares. His first incisive run led to a decent chance for Canos that he failed to take. However moments later Ojo dribbled past the Derby defence and showed strength holding off a defender before finding the perfect cross for Sinclair to chest home Liverpool second.

Tom Brewitt got caught in possession moments later, it took a brilliant goal line clearance from Sam Hart to preserve the Liverpool lead.

Harry Wilson scored an excellent free kick to give Liverpool a two goal lead. Before Canos added the fourth with a fine shot from distance before Wilson was taken down for a penalty which he converted himself after some discussion with Jerome Sinclair who was hoping to complete his hat trick.

Sinclair gave away a penalty in the final moments which Derby converted and offered a bit more respectability to the score line.

Liverpool will play Birmingham City at home in the next round. The match will have to be played at Anfield as is a requirement in the FA Youth Cup that all ties from the fifth round onward are played at the clubs home stadium.

Harry Wilson has had a good season but has been overshadowed by the likes of Kent, Sinclair, Ojo, Chirvella and Philips. However, Wilson was excellent for Liverpool U18 on Wednesday night both from the dead ball and from open play, when he constantly caused problems with his pace and trickery. He showed great mental strength too bouncing back from a poor error against Valencia in the quarter finals of the Frenz International Cup recently. He will need to get a little stronger to move up to the next level but he seems to have everything else to progress.