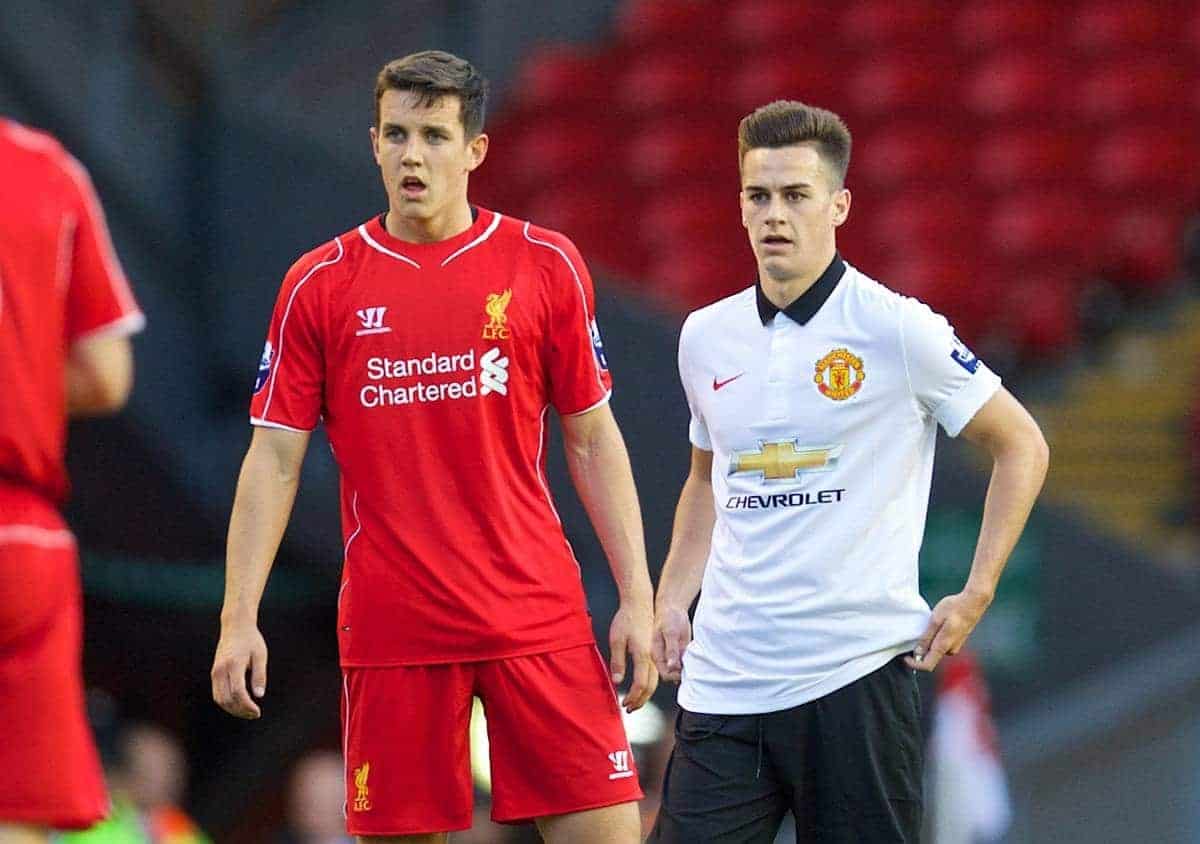 Liverpool U21s lost 2-1 to their biggest rivals in front of a crowd of 5,000 at Leigh Sport Village on Monday night.

Both teams lined up with very attacking starting elevens. While the game was played at a high intensity, it lacked quality and excitement, especially in the second half after United regained the lead and took control of the game.

Liverpool went into the game with Jordon Ibe playing his first match since returning from a successful loan spell at Derby County. Michael Beale set up the team with three at the back. Ryan McLaughlin played on the right of midfield pushed up right behind Sergi Canos. Sheyi Ojo was left with much of the left flank to patrol both offensively and defensively.

United lined out with two first team squad players in Victor Valdes and Anderson, but also with Tyler Blackett, Paddy McNair and Jesse Lingard who have featured for United’s first team in the league this season. Nick Powell was also recently on loan at Leicester City.

There was very little between the sides early on. Jerome Sinclair struggled to have an impact early on as his touch let him down on a couple of occasions. Ibe tried to impose himself on the game but besides a few nice touches and dribbles he dipped in and out of the game without causing the United defence too many problems. Ojo had clearly been identified by the United team and he was well marshalled all night on what was a very narrow pitch for wide players.

The United defence looked nervy with McNair, Blackett, and Vermijl making needless mistakes. Cameron Brannagan was starting to impose himself in midfield and fought to control the game against a good United midfield. Sinclair also started to cause the United defence problems with his pace and trickery.

The first real chance fell to Canos after a poor pass by Blackett, left him one and one with the former Barcelona keeper Valdes. Canos shot wide when he should have at the very least hit the target. I don’t think he realised he had so much time.

At the other end Powell had just a good a chance but also shot wide with the goal at his mercy. Powell atoned for his miss moments later when he steered home a fine header after an excellent free kick by Andreas Perreira. However the Liverpool defence was clearly not set up right. I have watched how our underage teams set up for set pieces and there is often a free man and no one attacks the ball.

United started to get to grips with the game after they scored with Perreira growing in influence and Powell always looked dangerous up front.

Just before the break Liverpool equalised when a brilliantly weighted pass from Brannagan split the United defence. The ball fell perfectly for Sinclair who dispatched a perfectly placed effort into the near corner of Valdes net.

Sinclair has had an excellent season for Liverpool at all levels this season. While others often get the limelight Sinclair has being a consistent performer most weeks and is an excellent finisher. He had an awful year with injury last season so it is good to see him back this season and he improves with each game. When he develops more physically and improves his hold up play, Liverpool will have an excellent forward that surely will get first team opportunities. He is the most technically gifted centre forward coming through in a long time.

Liverpool would have being the happier going in at the break however it was United that came out more determined in the second half. Saidy Janko made a break for United into the left hand side of the Liverpool penalty area. Liverpool had five defenders against two United attackers until McNair arrived late into the box to score the winner past Vigouroux. Again it was poor defending by Liverpool, no one tracked McNair’s run and Liverpool also had too many defenders far too deep in their own box.

United continued to have chances after their goal. The Liverpool left side was continually being exposed. Ojo failed to track back on occasions and the formation was not helping him either. Liverpool failed to get back into the game and it’s a shame that they did not revert to a back four as McLaughlin offered very little offensively and was causing Canos to push in to an already congested middle.

Liverpool also lacked a creative player that could find a pass in the attacking third. Brannagan did try but he was often too deep. Perreira controlled the game for United who ran out comfortable winners.

Some of the younger Liverpool players struggled to impose themselves on the game. Canos, Chirvella and Ojo all had quiet games. It just shows how big the step up from U18 to U21 is. A derby match with United is unlike most U21 games as it is played with pace and intensity, something that most U18 and U21 games are not played at. It is more like a football league game. It is a shame there is not more of these games during the season as it helps the younger players work harder to get to the next level.

Man of the match

Nick Powell was dangerous throughout for United but Andreas Perreira controlled the game from midfield and was the best player on the pitch.

Liverpool’s best were Randall, Brannagan and Sinclair. I thought Brannagan showed his class through out and never gave up.