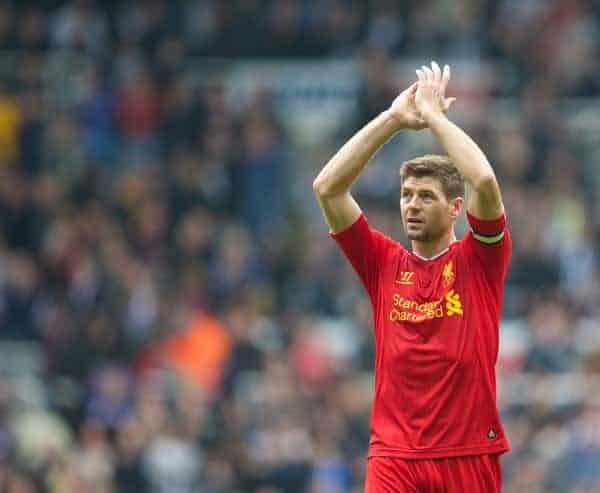 When an eighteen-year-old Steven Gerrard was to step on to the field of Anfield to make his debut against Blackburn Rovers on the 29th November, 1998 who amongst the legions of Kopites was to know how often he would lead them to the ‘golden sky’ across the course of his career?

A local lad, born in Whiston, Gerrard joined the academy of his boyhood club at the age of nine progressing through the youth ranks as a highly-rated teenager. After making his debut against Blackburn he appeared sporadically for the Reds during the 1998-99 season before establishing himself as a regular in central midfield during the second half of 1999-2000 season in doing so earning himself a spot in England’s Euro 2000 squad at the age of just 20. However it was the 2000-01 season when Gerrard really came in to his own making 50 appearances as Liverpool won the treble of the League Cup, FA Cup and Uefa Cup. This was the season when Gerrard really began to step up: after starting the season with a memorable strike at Goodison in September he’d end it scoring in the Uefa Cup final. It is testament to his career that his Alaves goal is not seen as one of his biggest: this was his first final goal, he would subsequently go on to score in the final of every major club competition at least once.

Fast forward a couple of years to 2003 and Gerrard would be handed the Liverpool captaincy: with the armband he would become the Reds’ greatest ever captain. A player with the quality to grace any of Liverpool’s greatest teams, throughout his Liverpool career Gerrard has been unfortunate not to be playing alongside talents of title winning quality to provide him with the Premiership his contribution has so dearly deserved.

With no Premier League title Gerrard’s pinnacle has to be in Istanbul where he guided the club to a fifth European Cup, twenty one years after the previous. Gerrard’s contribution to that trophy will never be forgotten: from his two goals away at Graz to secure Liverpool’s place in the group stages and his 25 yard screamer against Olympiakos to ensure the Reds’ reached the knockout stages to his man of the match final winning performance (including the header that started Liverpool’s greatest ever comeback) Gerrard’s contribution is etched on the Reds’ fifth European Cup trophy.

For most Gerrard’s European Cup final performance would be the best of their career however he himself would outdo himself one year later in the 2006 FA Cup Final (known today as the Gerrard final). After providing a sumptuous assist for Djibril Cisse’s goal that would bring the Reds’ back in to the game from 2-0 down, Gerrard would go own to score two goals of his own including a last minute equaliser to bring the game into extra time that will go down in LFC folklore. With Liverpool four minutes from defeat Gerrard summoned something from within himself and smashed home a thirty five yard half volley in to Shaka Hislop’s bottom corner to send Reds’ fans delirious: that there is even debate as to whether that was Gerrard’s best goal for the club is testament to the quality of goals on his CV. Gerrard wasn’t finished there though as he went on to place his penalty into the top corner in the shootout before getting his hands on the FA Cup for the second time in his career.

It was during this period that Gerrard was at his peak in his Liverpool career, almost single-handedly dragging the club up the table each year. Under Benitez Gerrard excelled with individual honours raining in alongside the trophies he won at the club.

After the disappointment of defeat in the 2007 European Cup final Gerrard would bounce back, with his greatest season arguably coming in 2008-09 as he played in front of Javier Mascherano and Xabi Alonso in a midfield correctly dubbed the ‘greatest in the world’. Although Liverpool were to end the season trophy less Gerrard was inspirational scoring 24 goals and contributing massively to the team’s finest performances including a 4-0 dismantling of Real Madrid at Anfield and a 4-1 win at Old Trafford. It was during this season that Zinedine Zidane dubbed him the best player in the world above the likes of Lionel Messi and Cristiano Ronaldo: high praise indeed.

The period after this was one of disappointment for both Gerrard and the Reds’ as the team regressed following the sale of Xabi Alonso to Real Madrid with the club’s owners at the time Tom Hicks and George Gillett leading the club into the abyss. It says much of Gerrard’s loyalty that he did not seek a move away from the club during this period or, for that matter, during any period in his career (despite brief flirtations with Chelsea) as any club in the world would have been blessed to have received a player of his quality.

As it was he stayed at the club and after a period of trouble with injury he would lead his boyhood club to victory at the new Wembley for the first time in 2012 as Liverpool won the League Cup final under Kenny Dalglish. Whilst not his most memorable performance, his humility in having a word with his younger cousin Anthony (who had missed a penalty for losing finalists Cardiff) before going off to celebrate spoke volumes of the man. Heartbreak in the FA Cup final was to follow that season which led to the departure of Dalglish and the introduction to the club of Brendan Rodgers a man who was going to bring a new lease of life to Gerrard.

Whilst Rodgers’ first season produced few moments of significance in Gerrard’s career his transformation of him into a holding midfielder in 2013-14 saw him hit form that made the numerous vocal legions writing him off look stupid. Gerrard was phenomenal in the role feeding the world class attack of Luis Suarez and Daniel Sturridge with his breath-taking passing range and clinically dispatching numerous penalties to keep the Reds’ in the title-race. As it was the team were to ultimately fall just short of the Premier League title but Gerrard’s mammoth contribution to the season was acknowledged by the FWA who placed him 2nd behind the phenomenal Suarez in their Player of the Year vote.

Whilst Gerrard hasn’t had the best time yet during the 2014-15 season there is time for him to turn his form around. His performance away at Leicester City evidenced the quality he still possesses, it is now up to manager Brendan Rodgers to correctly utilise Gerrard and ensure his last season at the club ends in success. There is nothing such an inspirational leader as Gerrard deserves more than to guide his side into the top four and win a couple of trophies to crown his Anfield career.

With just months of the legendary skipper’s time at Anfield remaining supporters should give Gerrard all the credit he deserves for a remarkable career. Although not the most decorated player in the club’s history in terms of silverware he has been the Reds’ best player since Kenny Dalglish, and perhaps better than the King himself as Liverpool’s greatest ever. Gerrard has provided Liverpool supporters with so many great memories and has written his name in to the club’s history as a man who will deservedly be cherished for eternity. Stevie thanks for the memories, to see you: it’s been a privilege.