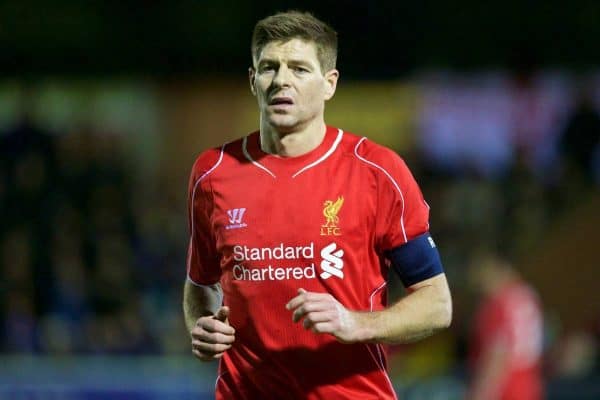 Liverpool captain Steven Gerrard is desperate to lead his side to glory in the FA Cup after inspiring them to victory over a spirited AFC Wimbledon.

The Reds battled into the fourth round of the oldest club cup competition following a 2-1 victory at Kingsmeadow, where their imperious captain scored twice and produced an all-round fantastic performance.

It was the first time the 34-year-old had taken to the field following his announcement last week that he would end his association with the club at the end of the season.

And Gerrard is desperate to bow out on a high note.

"I always enjoy the FA Cup," he said on BBC One. "I grew up loving the competition and as it's going to be my last time, I want to make the most of it and try and go all the way.

"If I weren't here playing for this team, I'd probably be in the stands watching it so I know what (the FA Cup) means to every single supporter, that's why I always try to give my best.

"We've got to take each game as it comes. I'm told we've got Bolton at home in the next round and that'll be another difficult test.

"I know Neil Lennon quite well and I know he'll set up his team to be very difficult to beat.

"We take each game as it comes but of course, (winning the cup is) what dreams are made of and hopefully that'll be the case."

Liverpool were given a stern test by the League Two strugglers, with burly striker Adebayo Akinfenwa cancelling out Gerrard's opener to send the teams in level at half-time.

While the visitors were worthy winners, they survived a couple of close scares after Gerrard's superb free-kick had put them back in front.

The former England midfielder paid tribute to the Dons, adding: "We expected (a tough encounter), it's the beauty of the FA Cup. It doesn't matter where you are in what league or how you're doing, form seems to go out and the window and it becomes a leveller.

"Fair play to them, I think their manager can be very proud of them, they were honest throughout the team and gave us a real test."