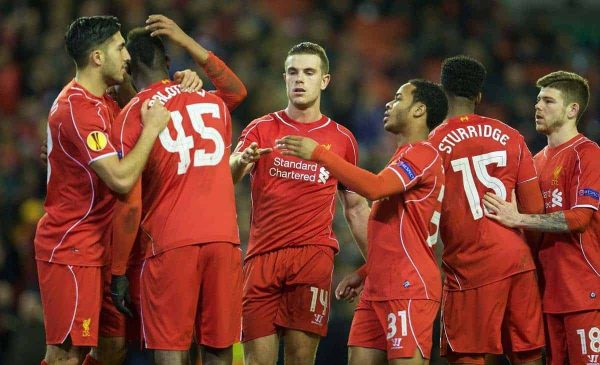 3 Competitions and 3 Wins as Liverpool’s Diversity Shines Through

After three tough games in three different competitions in the last 10 days, have Liverpool proven they can compete all three fronts this season? Joseph Copeland is happy with the signs so far.

Phew. Take a breath everybody. The whirlwind that has been the past 10 days for Liverpool Football Club has come to an end. It started with one of the matches of the year in the Premier League as Liverpool swash buckled their way past an improved Tottenham side 3-2. That was followed up with an FA Cup fifth round tie versus Crystal Palace at the same stadium Reds fans watched a 3-0 lead vanish in a mere 10 minutes, along with any League title dreams just last May. However, a 2-1 win and a berth in the Quarterfinals eased that pain a bit. Finally a date with Turkish side Besiktas in the Europa League Round of 32 beckoned. It wasn’t pretty, but Liverpool clawed out a winning result. Not bad for a “thin squad” right?

While the debate has raged for weeks as to whether or not Liverpool should attempt to compete on all fronts, this successful run of games across multiple competitions should serve as proof that it is not as hopeless of an idea as one might think. I might be lambasted as being “overly optimistic” or “blinded by fandom” but these results were very telling. Not one of these three matches were Liverpool romps where the outcome was determined in the first 15 minutes. They required a full 90 minutes of intensity and focus. Is it telling that Raheem Sterling only participated in roughly 13 minutes over the three games? I haven’t come to a conclusion yet. However, it should serve as a reminder to both the lad and the club that we can still succeed without his presence.

Now before you go off on me for saying such a blasphemous thing, I’m not implying Liverpool are better off without Sterling in the team. There is no denying his importance for Brendan Rodgers. He has shouldered more than he probably should have at this stage in his young career. Nevertheless, the emergence of fellow youngster, Jordon Ibe, has covered his absence beautifully. It truly has been a baptism by fire for the 19 year-old from London. He started the Everton match and put in a strong shift in only his second Premier League start. He has turned that into a great run of games that included winning the clinching penalty in the Europa League on Thursday. His ability to play in both an advanced or withdrawn role on the wing has allowed him to impact games in more ways than one. Like Sterling, he has an uncanny confidence for such a young, unproven player. He has brought a swagger into the side that had been missing over recent weeks.

That confidence was seen in a heart pounding match against Spurs. The 3-2 result reminded viewers of matches from last season where the Reds simply outgunned teams until the result went their way. The action was free-flowing and end-to-end as you couldn’t put a finger on who would score next. That’s the way we have become accustomed to watching Liverpool play under Brendan Rodgers. As it were, four days later we would see a different side ease by Crystal Palace in the FA Cup. Even being down 1-0 at the half there was no panic in the team. They simply kept putting the pressure on until the Palace resistance finally broke and Daniel Sturridge and Adam Lallana would put them to the sword in a matter of minutes after the intermission.

It was a professional performance from Liverpool. Once they captured the lead, they controlled the flow of the game, basically taking the home-field advantage out of play. It is those kinds of displays that this team would be right to duplicate. That brings me to the third game of this stuffed fixture list. Continental football is something entirely different from domestic action, as Liverpool discovered during the Champions League Group Stages earlier this campaign. While the Europa League isn’t as glamorous, the notion still rings true.

You need a tactically sound side that is able to adjust on the fly. Continental competition also brings a different style of refereeing which requires team to reign themselves in a bit. For as much talent that Liverpool boasts up and down their roster, they are severely lacking in European experience. That is why I’m more pleased with the final result against Besiktas (1-0 win) than I am with the actual performance. Finding ways to scratch out wins against a foreign opponent is not something to be scoffed at for a young side like this.

While the team as a whole wasn’t firing on all cylinders, that doesn’t mean there is not praise still to be handed out. Mario Balotelli continued his resurgence in the Liverpool side with a battling effort that included converting the winning penalty. Yes, he was right to take the penalty over Jordan Henderson. That is now two winning goals in the past three matches for the enigmatic Italian. He has clearly earned the chance to start alongside Sturridge as we look ahead.

As we do look forward, the road does not get any easier. A crucial clash with fourth place Southampton awaits on Sunday. With what we’ve seen recently from Liverpool, they are in with a very good chance to come away with maximum points if they continue in this vein of form. The continued maturation of Ibe, Sterling and Lazar Markovic will be vital for this team as they push on. The eventual return of Steven Gerrard from injury might throw a wrench into the budding chemistry that is on display over recent games.

Liverpool don’t boast the squad depth of Bayern, Real or Chelsea. However, they have a very good starting XI with above average talent waiting in the wings. If they can stay healthy (I’m looking at you Danny Boy) they should be in with a shot for silverware on multiple fronts. I for one, am looking forward to the challenges ahead.