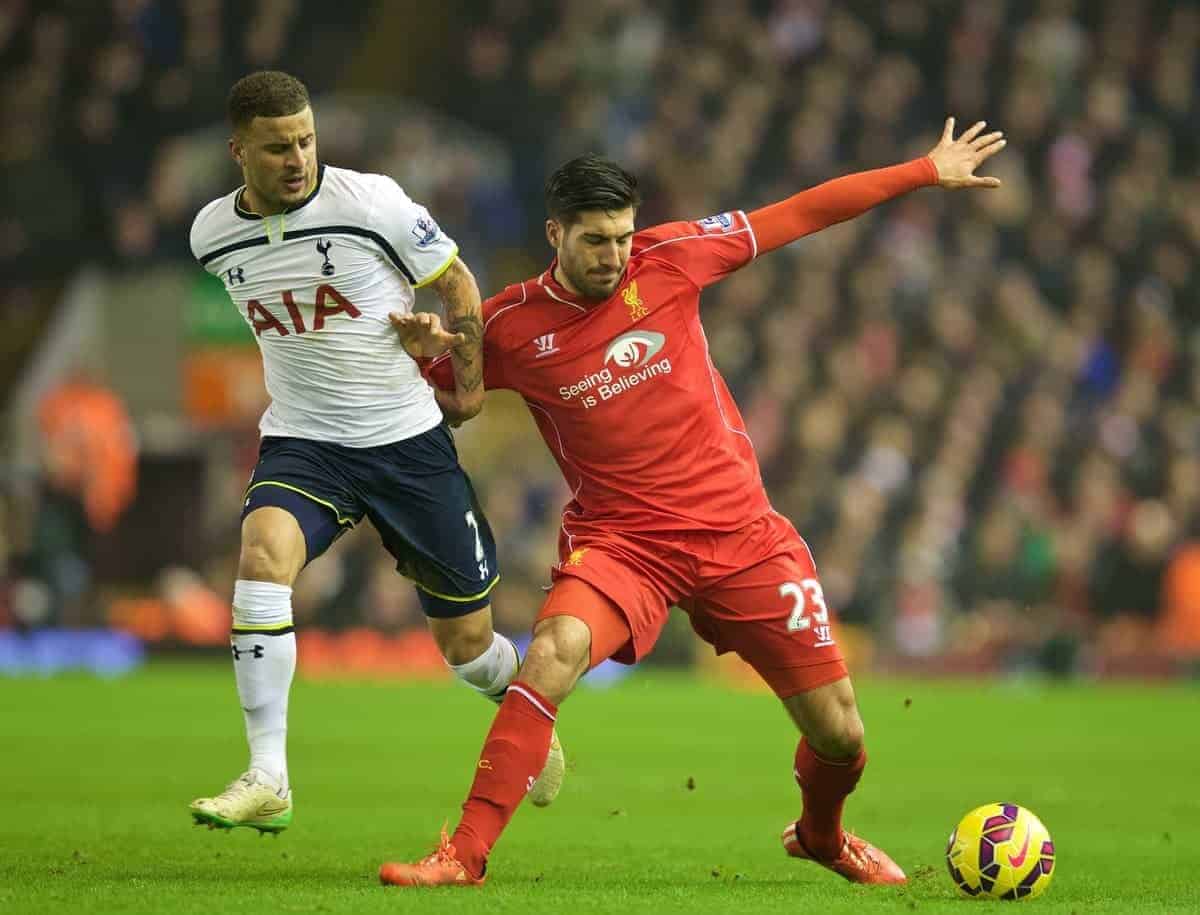 We round-up the best newspaper reaction from Liverpool’s thrilling 3-2 win over Premier League rivals Tottenham at Anfield on Saturday evening.

It was fantastic game of football from start to finish, and despite looking for so long as though the game was heading towards a costly draw, Mario Balotelli poached a late winner to earn the Reds a massive three points in their quest for top-four finish.

Brendan Rodgers’ side responded well from what was a fairly lifeless performance against Everton at the weekend, playing some flowing attacking football and creating chances at will.

Daniel Sturridge‘s first start after five months out played a huge part in that respect, and despite looking rusty, the 25-year-old still won a penalty and hit the post with a brilliant back-heeled effort. His return is huge.

Massive win for #LFC tonight. Deservedly beat a good Spurs side. Ibe and Can outstanding again. Big step towards the top four.

Defensively they looked more shaky than they have so far this year though. That was largely due to Lucas Leiva being out with a groin injury, and Steven Gerrard struggling in a midfield two alongside Jordan Henderson.

Emre Can and Jordon Ibe were superb once again, while Martin Skrtel, Alberto Moreno and Lazar Markovic were all impressive too. Philippe Coutinho and Henderson were below-par by their usual high standards.

Mark Ogden of the Daily Telegraph was full of praise for Sturridge on his return to the side:

The return of Daniel Sturridge to the Liverpool starting line-up for the first time since August was a significant moment for Liverpool.

With Sturridge back, the high-intensity pressing game and ability to counter at speed which Brendan Rodgers demands were once again there. Sturridge was a nuisance throughout, his pace and readiness to shoot on sight a reminder of the qualities which took Liverpool so close to the title last season.

The 25-year-old played a central role in teeing up Lazar Markovic for his opener and also drew the foul from Danny Rose which led to the penalty scored by Steven Gerrard.

The Mirror‘s Dave Kidd hailed the impact of the much-maligned Balotelli, who at long last did his talking on the pitch:

It just had to be the most talked-about striker in the Premier League who settled this crucial Champions League six-pointer. No, not Harry Kane – even though English football’s meteor man scored one, set up another and threatened to start a riot on The Kop. This time it was Mario Balotelli – the one man who makes more headlines than Kane, even when he barely plays.

Mr Mayhem was at the ready to settle a lively old affair with the quality which first made him a star before all of the moodiness and lunacy – the art of goalscoring.

When he prodded home an Adam Lallana cross seven minutes from time, Rodgers celebrated by punching the air and laughing openly. After all the torment Balotelli had caused him, this was some game for him to settle.

Sam Wallace of The Independent also highlighted Balotelli’s impact, but stressed that he has a long way to go if he is to win round the Liverpool fans:

Finally, Mario – as his Twitter handle has it. It only took the famously enigmatic Italian striker 13 league games and six months of his Liverpool career but Mario Balotelli’s first league goal for the club arrived just in time.

That it came tonight to decide an open, attacking five-goal game was testament to the drama that pursues the Italian wherever he goes although, in this part of his career, there had been conspicuously little of that until his winner over Tottenham.

Balotelli has been a £16m gamble and no matter how precious the points against Spurs he will still need to contribute a great deal more before he can even be considered close to a success.

Andy Kelly of the Liverpool Echo lauded the brilliance of Emre Can, after yet another Man of the Match display from the exciting 21-year-old:

It’s probably the obvious word to use about a German, but Emre Can was quite simply imperious. We know he has ice in those veins but plenty show poise but fail to do anything with it.

How many times did he want to find himself in a corner, Harry Kane closing in. A drop of the shoulder, a 30 yard ball to feet. Coutinho away on the break. He can tackle too, a splendid effort on Eriksen preventing him putting a rampaging Vertonghen in on goal first half.

He may be just 21 but Emre Can is showing the signs of being one of Liverpool’s big players for years to come. He does all those simple things wonderfully.

Kelly also heaped praise on Martin Skrtel, perhaps one of the Reds’ most unsung heroes of late:

While Can and Sakho have been rightly lauded for their roles in this new 3-4-2-1 formation, Skrtel is the man who holds it all together in the middle.

The 30-year-old Slovakian is in a rich vein of form and coped admirably with the threat of the Spurs front three despite a distinct lack of midfield cover at times.

He’s approaching 280 games in a Liverpool shirt now and is one of the few leaders left in the team. We may need a few of those after that LA flight gets called in June.

Next up for Liverpool is Saturday’s FA Cup fifth round clash with Crystal Palace at Selhurst Park (5:30pm kick off GMT).