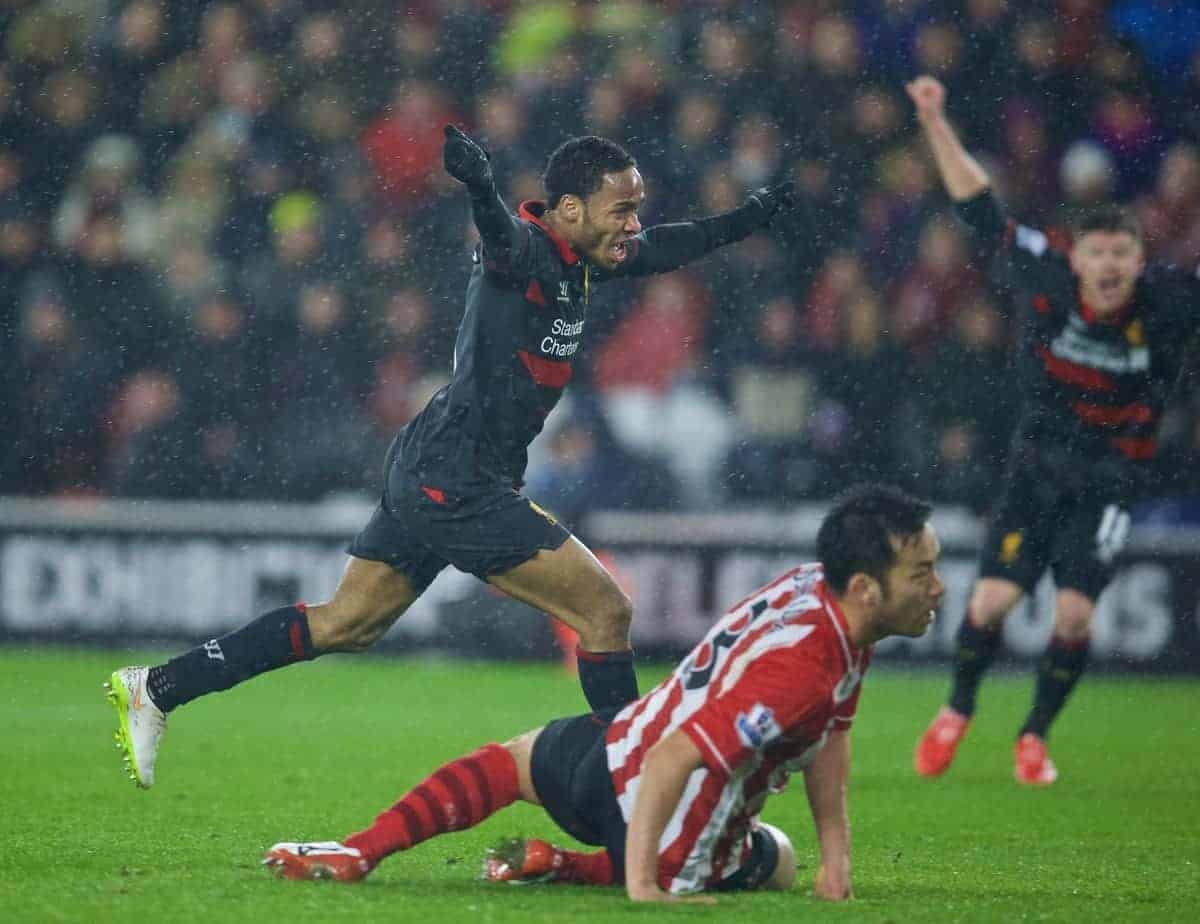 Liverpool took another step towards a top-four place with their 2-0 away win over Southampton, and Jack Lusby takes five talking points from this victory.

On a miserable Sunday evening at St. Mary’s Stadium, Liverpool ensured their pursuit for Champions League qualification continued in earnest with a 2-0 win away to Ronald Koeman’s Southampton.

An early goal from Philippe Coutinho and a second-half strike from Raheem Sterling bookended what was a frenetic, open bout, and a great test for Brendan Rodgers’ side.

Here are five talking points from a crucial win for Liverpool away to Southampton.

Naturally, with Liverpool travelling to unofficial feeder club Southampton for the first time since harvesting Koeman’s side in the summer, much of the pre-match debate was on the return of Adam Lallana, Dejan Lovren and Rickie Lambert to St. Mary’s.

Lallana and Lovren both featured for the Reds in starting roles, and will look to put their performances behind them after a tough evening on the south coast.

Lovren, stepping in for the injured Mamadou Sakho in a right centre-back role, was booed relentlessly throughout, and looked to struggle with the pressure, particularly when in possession.

He finished the game with a lowly passing accuracy of 65.5 percent, less than any other Liverpool player to complete the full 90 minutes.

Dejan Lovren finished Liverpool's win over Southampton with a passing acc. of 65.5%. A far cry from Mamadou Sakho's 94.9% vs. Besiktas. #LFC

Lallana endured a struggle of his own, in maintaining fluidity and an understanding with Liverpool’s other attacking players.

The midfielder was a consistent outlet for a rampaging Jordon Ibe, but lacked the impetus or the pace of his own to carve open the Southampton defence—in just over an hour, Lallana made just 22 passes.

When Daniel Sturridge replaced Lallana in the second half, Liverpool immediately looked a more threatening prospect, and this lead to Sterling’s goal.

Ibe drew considerable praise after his bright display in the midweek victory at home to Besiktas, and there was no surprise when the in-form 19-year-old kept his place in Rodgers’ side for the trip to Southampton.

Operating in the right wing-back role once more, Ibe continued to provide a consistent attacking threat from this wide area.

Combining intelligently with Lallana with a series of one-twos throughout the first half in particular, Ibe would look to use his pace to dominate stand-in left-back Matt Targett, who endured a torrid Sunday evening.

Ibe made three dribbles in his 74-minute outing, more than any other player.

Much more needed from Sterling, poor runs, work rate low, not linking deep either. Markovic having a mare bar the middle 10-15 mins of 1H.

What was more impressive, however, was a showing of maturity in his defensive work—Ibe excelled where Lazar Markovic didn’t.

Fielded on the other defensive flank the Serb was withdrawn at half-time, with Southampton’s Nathaniel Clyne enjoying the freedom of the right wing—Markovic couldn’t deal with his relentless supporting runs.

Ibe, admittedly facing up to a less proficient attacking outlet in Targett, was diligent and efficient in his defensive duties, showing another facet to his swiftly expanding repertoire in this new role.

In the opening stages, Joe Allen and Jordan Henderson were decidedly lacking in presence in the centre of midfield, and Southampton benefited from this—Victor Wanyama, James Ward-Prowse or Steven Davis would receive the ball in a central area and switch quickly to one of the Saints’ lively wide players.

As a result, Lallana and Coutinho had to drop deeper to support the midfield, and Liverpool’s attack was stunted.

In the second half, however, Southampton’s attack focussed increasingly in the central areas, with the lively Filip Djuricic moving into a No. 10 role behind Graziano Pelle on the introduction of Sadio Mane.

This suited Liverpool—with less pressure on their wide areas, a greater sense of calm developed.

Joe Allen was my MOTM though. I lost count of the interceptions, the passes that kept us the ball, the number of times he pressed the ball.

Allen was central to this, as his partnership with Henderson in central midfield grew into a more compact unit.

The midfielder made a pair of crucial interceptions, one of which was perfectly timed to thwart what would have been a dangerous Southampton counter, and his energy in the central role ensured that the Saints’ playmakers didn’t have the time on the ball they required to pick apart Liverpool’s defence.

In the pass Allen kept things simple, with his neat, precise style resulting in an 86.7 percent passing accuracy—more than any other Liverpool starter.

When Liverpool needed to gain control, Allen was perfectly placed.

Another beneficiary of Southampton’s central focus in the second half, Martin Skrtel was in phenomenal form as Liverpool’s covering centre-back at St. Mary’s.

This was crucial. With Lovren struggling in possession and Emre Can also lacking, Liverpool had to revert to their primal instincts—an area of the game that Skrtel thrives on.

The 30-year-old made three blocks, three interceptions and 13 clearances, and was a credible contender for the man-of-the-match award.

2 goals in his last 18 Premier League appearances for Graziano Pellè. Desperately out of form. Real cause for concern for Saints.

That Skrtel was in such resolute form ensured the continued misery of Southampton striker Graziano Pelle.

Pelle had failed to score in Southampton’s last eight Premier League games, belying the previous run of goalscoring form that saw him as an early Golden Boot contender.

Skrtel’s physical presence hampered Southampton’s main threat once more, and ensured a lack of fluidity in the Saints’ forays forward—Pelle made just 29 touches, less than any other player to complete the full 90 minutes.

With Manchester United losing to Swansea City on Saturday, and Tottenham Hotspur earning only a draw from the visit of West Ham United on Sunday, Liverpool knew this was a pivotal moment in the season—win this tie, and Rodgers’ side could gain on on their top-four rivals.

Happily, a resilient performance ensured this, and Liverpool proved their credentials in the race for Champions League qualification.

It was far from a great performance, but—as Sky Sports will make sure you don’t forget—winning ugly is an important quality for a top-level side.

Liverpool now sit one point behind Southampton, and one point ahead of Spurs, in sixth place in the league table—just two points off fourth-placed United, and three points off Arsenal in third.

This victory was an important statement, particularly after a midweek Europa League clash, and Liverpool need to continue this momentum now to solidify their position.

What else can we take from Liverpool’s 2-0 victory away to Southampton? Let us know in the comments below.