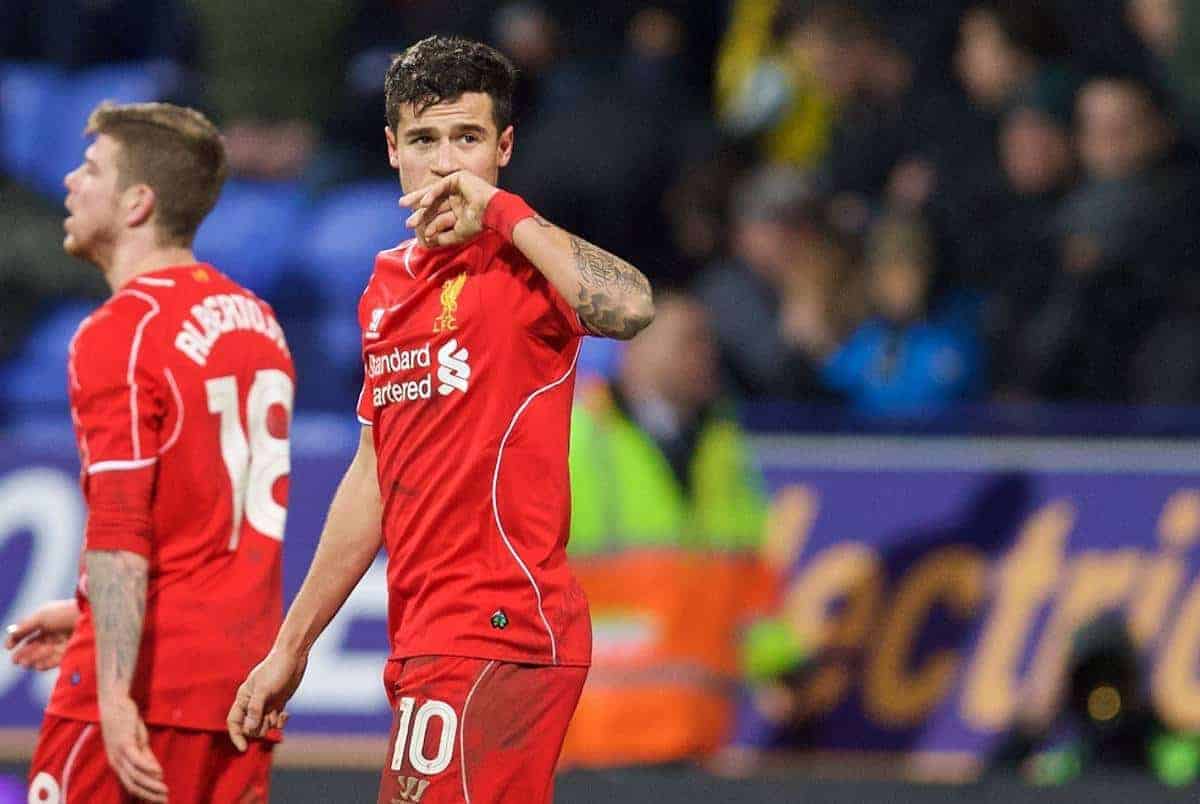 Liverpool produced a late comeback to beat Bolton 2-1 in the FA Cup on Wednesday, and we look at how fans, ex-players and current stars reacted on twitter.

It was one of those horrible evenings for 86 minutes, when you had virtually accepted defeat. The ball would simply not go in, with post and crossbar hit, Trotters goalkeeper Andy Lonergan making superb saves and David Wheater performing like Franco Baresi at the back.

Eidur Gudjohnsen’s penalty looked to have sent the Reds crashing out, only for the brilliance of Raheem Sterling and Philippe Coutinho to save the day in the dying embers of proceedings.

It was a below-par performance on the whole from Brendan Rodgers’ side, particularly in the first-half, and defeat would have been very difficult to stomach.

Coutinho’s goal was also vital because it meant Liverpool didn’t have to play extra-time, which with Everton and Spurs on the horizon, would have been far from perfect.

Here’s how social media reacted to a heart-stopping night at the Macrom Stadium.

Original British drama on the BBC. Great credit to Bolton, even if pen award was questionable. #LFC deserving winners

That is an absolute FIFA goal.

Coutinho will rightly get headlines but quality of Sterling's finish should not be overlooked, dropping over his shoulder

Good to see the mainstream media are recognising Coutinho as a peer to the likes of Silva – he's growing into a world class player. #LFC.

Great stuff. Still very frustrating for most of the game. This side just needs a little more ruthlessness going forward. Palace away under Pardew will be another good cup tie, win that and we’re in the quarters.

Emre Can, Raheem Sterling and Philippe Coutinho. All 22 and under.

Not averse to giving Emre the armband next season. Got hold of this game when we needed a leader.

I've seen the future and it's Emre Can #lfc

Can gets better every time I see him.Could be a big player in the future for us.Proper football brain too!!coutinho deserved that goal!

‘abcd’ on the forum:

Just goes to show if you don’t kill a game when you have the chance you leave yourself open to things outside your control like that diabolical penalty decision. On the flip side of that Gudjonsson should have made it 2-0 shortly after the red card which would have killed it in all likelihood.

Liverpool have reached the FA Cup fifth round in successive seasons for the first time since 1995 & 1996.

Last 20 games for us have seen just 3 losses. Massive improvement.

Cup winners always have a scare on the way!!!