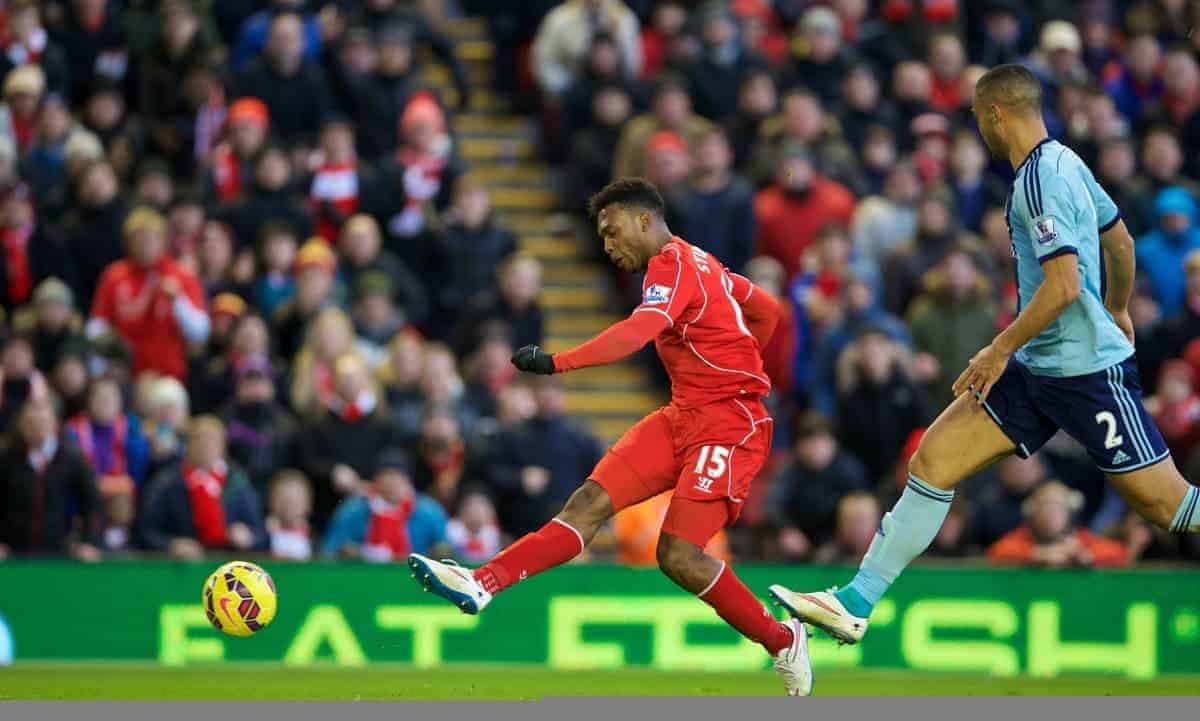 Liverpool host Spurs in a must win game on Tuesday night as the Reds look to close th gap on the Champions League places. Ben Twelves discusses the team selection options for Brendan Rodgers ahead of the clash. Brendan Rodgers’ Reds return to action at Anfield for another vital Premier League clash against Maurico Pochettino’s in-form Tottenham, with Liverpool in desperate need of a win to drag themselves into genuine top four contention.

A goalless draw in the weekend’s flat derby fixture against a negative Everton at Goodison Park now looks like two points dropped with some extremely tough matches ahead, and having conceded a point to fourth place Manchester United, meaning the Reds now sit five points behind, maximum points really are required.

Rodgers: "Tottenham are playing very well. Big change has been introduction and impact of 2 home grown players – Mason and Kane."

Spurs arrive on Merseyside having won more games away from home than Rodgers’ men have won at Anfield this season, and while the revival that has dragged Liverpool to the fringes of the Champions League race has been commendable; the Reds need to begin to claim some big results in upcoming games to catapult themselves into the mix as the sprint finish draws closer.

Rodgers’ side will need to continue their good defensive work which has seen them record four straight clean sheets in the league if they are to give themselves a fighting chance of grabbing what would be a massive win against the Londoners, but the task could be made harder as the Liverpool boss could face the possibility of having to make some untimely changes for the clash.

Rodgers has been hit with a hammer blow as Lucas Leiva faces the prospect of a month on the side-lines after being forced off in the first half against the Blues, and the in-form Brazilian’s absence is sure to be a big loss for the Liverpool manager.

Philippe Coutinho and Raheem Sterling also picked up knocks on Saturday but Rodgers revealed in his pre-match press conference that he expects the fearsome duo to be fit in time for the match, meaning he could be forced into just the one change from the team that started the derby.

With Lucas set to miss out, Joe Allen could once again deputise in his absence after the Welshman did an effective if unspectacular job last weekend, though Rodgers has options at his disposal with the possibility of moving the excellent Emre Can higher up alongside Jordan Henderson which would then see Glen Johnson, Dejan Lovren and Javier Manquillo as possible options to come into the back three.

Rodgers: "Ibe can go into any arena in the world and play well. Hopefully that game at Goodison will fast-track his development."

Jordon Ibe took over from Lazar Markovic who dropped to the bench after going off injured against Bolton last week, and after an incredibly impressive first start since May 2013 the 18-year-old could keep his place, allowing the Serbian to come back into the team into one of the more natural attacking positions.

Markovic could be joined there by fit-again Adam Lallana and Daniel Sturridge, who could finally receive his first start since returning from five months out against the club in which made his last start against at White Hart Lane back in August’s 3-0 win.

Rodgers on Sturridge: "He's been training. Whether he starts tomorrow or at the weekend, you'll have to wait and see."

With Coutinho and Sterling likely to be fit in time to feature according to Rodgers, the boss may choose to make just one forced and one chosen change to his team.

It’s a straight toss-up between Allen and Can to play in the midfield, and with the German in fine form in the ever-reliable back three and Liverpool needing to ensure they remain strong defensively, Can should stay in the back line, allowing Allen to come into the starting line up in Lucas’ place.

In attack, successive 90 minutes and ineffective displays should see Steven Gerrard make way for Sturridge to start alongside the Brazilian magician and Sterling, and Liverpool should line up like so on Tuesday night: As discussed however, Can’s outstanding ability and versatility does provide food for thought for Rodgers, and the Northern Irishman could be tempted by a powerful and energetic midfield for the game which should see the 21-year-old join Henderson in midfield allowing Johnson to come into the team, and should the match come too early for Sturridge, Markovic to enter into the front three.

That would see the Reds line up like so: A tough game awaits Rodgers’ Reds on Tuesday night against top four chasing rivals, Spurs, but if the Reds are serious about competing for Champions League place, it’s a match they must win to ensure they don’t fall further adrift of fourth place.