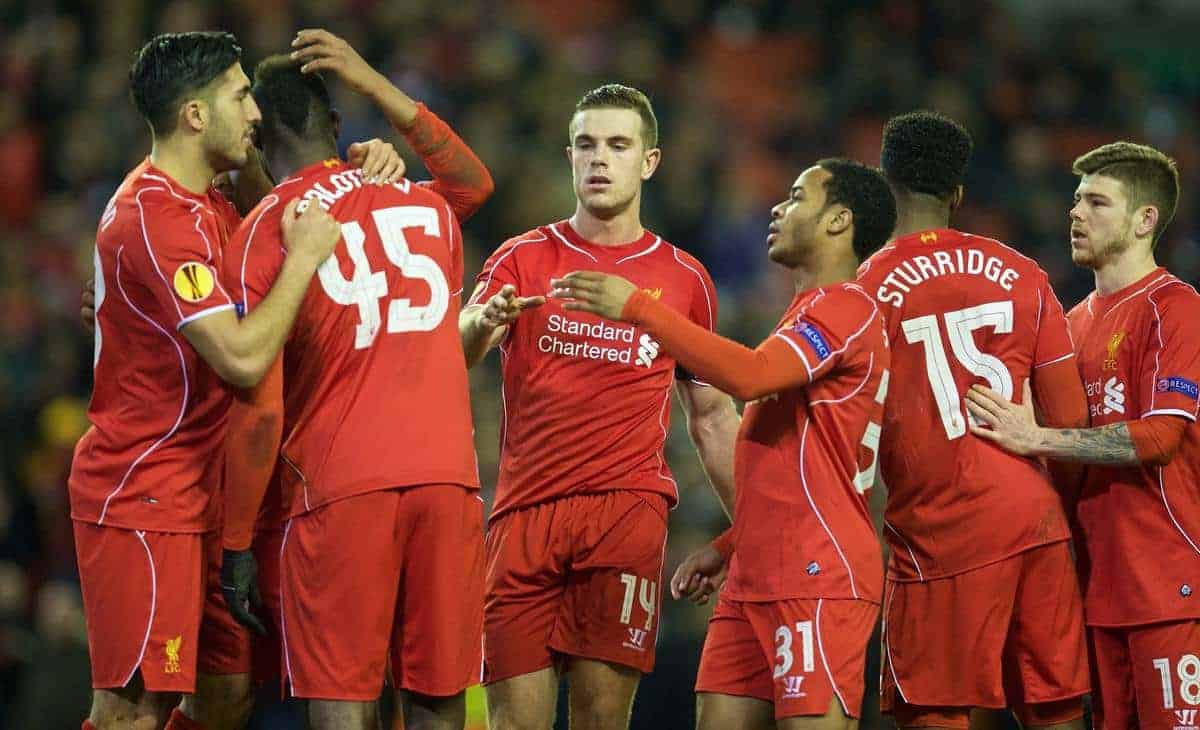 A little bit of controversy and the media are ready to pounce. Danny Gallagher looks back at the over-hyped fallout from Thursday night’s “penaltygate” during Liverpool’s 1-0 victory over Besiktas.

Ninety three minutes of football played and just over five of them proved to be the talking point as Liverpool defeated visitors Besiktas at Anfield on Thursday.

The game exhibited the Reds’ recent revival from the outset with strong, measured build-up play causing problems for the Turkish side.

Yet the final touch wasn’t quite there when needed, and the lack of penetrative edge left Anfield a cauldron brimming with tension as the minutes ebbed by.

The Kop stood with bated breath as the prospect of travelling to Istanbul without a home lead grew increasingly more likely.

With 85 minutes on the clock and the weaving run of the ever impressive Jordon Ibe resulted in a stone-wall penalty; cue the pantomime.

We all witnessed what followed, a testosterone-fuelled Jordan Henderson ran to claim the ball only to be thwarted by Mario Balotelli, much to the distaste of the animated Daniel Sturridge.

It appears Henderson gave a parting word to Balotelli, perhaps something along the lines of “don’t you dare miss this”. But let’s have a frank moment here, how many of you honestly thought he would?

The scenario itself was very un-Liverpool, to use such an awful phrase. But it was football, heated and competitive; it happens.

A fire-pit of a punditry box followed after the game, with Peter Reid and Gordon Strachan at loggerheads over the actions of Balotelli.

Predictably, guest pundit and Liverpool captain Steven Gerrard was asked the question and, even more predictably, he said the penalty would have been his.

Should the skipper have left it there? Perhaps.

But his addition of saying Balotelli should have taken orders and showed Henderson a little more respect further added logs to an already obstreperous inferno.

The incident writes a headline, no doubt about it. But that aside, how detrimental was the episode to Liverpool, if at all? I’d personally argue it was quite the opposite.

Of recent weeks Henderson has displayed an admirable growth in character.

Over the past 18 months we have each had the pleasure of seeing the unlikely misfit transform into one of the most integral players in the current XI.

Now Henderson has his eyes on the highest of honours, permanent ownership of the captains armband.

Two instances of late stand out to highlight the growing in stature of the Wearside lad.

The first being the mark he stamped upon the League Cup semi-final at Stamford Bridge. A leader motivates, encourages and protects his teammates – here all three were displayed.

Central London knew that Jordan Henderson had arrived that night, as did Diego Costa.

The replay fixture away to Bolton Wanderers provided the next instance of Henderson’s distinction. Trailing 1-0 with less than 10 minutes to go, the Reds looked majestically creative, yet the equalizer eluded them.

Being one of the few away games I personally have been able to attend of late, something very prominent occurred to me around the 80 minute mark.

As the visitors regrouped in the centre-circle, waiting for the opposition to retrieve a wayward ball from the west stand, the solitary figure of Gerrard cut an isolated shape away from the cluster of bodies congregating around the halfway line.

At the epicentre, Henderson, only introduced as a second half substitute, fervently calling for a final 10 minute all-out assault, pulling at the hem of his shirt animatedly in the process.

So accustomed to it being Gerrard screaming the battle cry, what was unfolding appeared temporarily surreal.

Minutes later Raheem Sterling rattled in a sublime equaliser and Liverpool were to go on and seal victory and progression to the latter stages. The moment had been poignant.

Performances against both Everton and Tottenham Hotspur in the immediate aftermath would each provide further evidence for the authority of the number 14.

Which brings us to Thursday’s game and the moment immediately following referee Szymon Marciniak blowing his whistle to award a penalty.

Prior to the incident, Henderson had spent the majority of the tie flying into challenges, applying constant pressure and barking orders in the absence of the injured Gerrard.

The game is driving to a close, Liverpool are in the ascendency but the goal just isn’t coming. A penalty is given. Does Henderson, captain for the evening and hopeful captain for the foreseeable future want to take it? Of course he does.

Every good captain should wish to. Leadership exudes confidence and Henderson has no reason to be short of that.

But here enters the question of practicality.

Up steps Balotelli and, for all his questionable character straits, the boy bleeds confidence wherever he goes and has an exceedingly good penalty conversion ratio to boot.

The stats speak for themselves. Prior to joining Liverpool, Balotelli had only missed one penalty in 26 attempts in major games, including the international stage.

Stepping up to take the ball from Henderson was not the trouble-making ‘bad-boy’ Mario Balotelli, but one of the finest penalty takers in European football.

Some were quick to liken to incident to the recent ruckus over at Goodison Park between Kevin Mirallas and Leighton Baines.

As ever, midfielder Joey Barton was quick to spout his opinion to anyone who would listen. However, for once, I believe he got it right on this occasion.

If Balotelli's on the pitch and its him or Henderson on a penalty to save your life? Who you gonna let take it? #nobrainer

Originally at least, before he then went on to tweet further comparing Henderson and Gerrard – but the man is his own worst enemy at the best of times.

The incident was blown out of all proportion, whipped up in a media frenzy and set to bake until golden brown.

Henderson’s anger reflected the passion which is currently overflowing in his game – a joy in itself to behold. His decision to walk away and trust the Italian with the spot-kick however was admirable.

A captain has to be forceful but also has to delegate. Henderson has never taken an in-play penalty for Liverpool or England, thus bestowing trust upon the highly capable Balotelli was a sharp and logical move.

Henderson could have dug in his heels.

His recent attitudes to certain ‘big’ personalities like Costa suggest he would have no objection to do so. But an 85th stand-off in front of the Kop, on an Anfield European night, would have left a horrible after-taste.

Suppose Henderson went on to miss the pen – the Reds travel to Turkey in search of everything, with animosity galore in the camp and the media spinning every angle possible to further stir the pot.

Balotelli finished it. Henderson congratulated him and the Reds return to the Atatürk Olympic Stadium next week as favourites. That’s all there should be to it, no paper trail of ifs and buts. Both players are contributing heartily to an extremely rejuvenated Liverpool side and long may it continue.