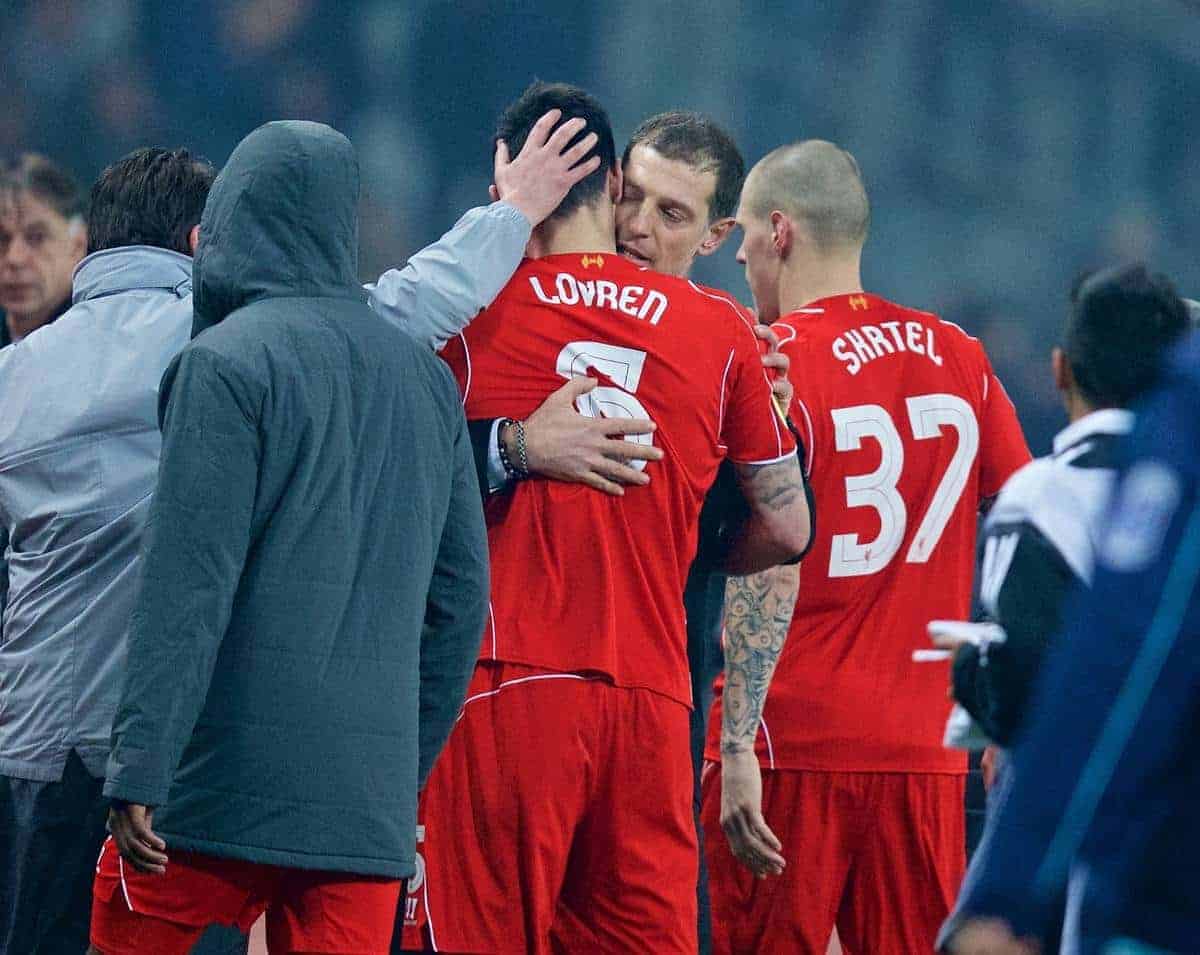 Brendan Rodgers’ Reds bowed out of European competition for the second time this season after an agonising penalty shoot-out loss in Istanbul.

Spot-kick heroics in the historic Ataturk Stadium evaded Liverpool, who turned in a miserable performance on the night, as Dejan Lovren fired hopelessly over the bar to hand Slaven Bilic’s side a place in the last 16.

The loss closes one potential route back into the Champions League for the Reds and means Rodgers’ side must now focus their full attention on the race for the top four in the Premier League, starting on Sunday with the visit of Man City to Anfield.

Here are the discussion points from Thursday’s European encounter.

The Welshman continued his improvement in form after a period of inconsistent displays and he was arguably the Reds’ leading man on the night.

Allen never hid, constantly provided a brave outlet in possession in the hostile atmosphere, and did his best to knit play together in an extremely disjointed performance — illustrated by his impressive pass completion of 82.3% including two key passes.

Despite being swamped and outnumbered thanks to a lack of work from those ahead, the Wales international stood up to the challenge in a physical midfield battle – alongside attempting to establish some rhythm to Liverpool’s play – as he made four tackles and five interceptions, also winning four aerial battles up against a strong Besiktas centre.

Emre has looked really good in the middle so far with Allen.

A praiseworthy performance from the 25-year-old was topped off by an excellent but sadly meaningless penalty which was confidently struck into the top corner.

Defensive Distribution Fails Without Can and Sakho

With Can in midfield and Mamadou Sakho missing through injury, the Reds failed to enjoy the same productivity with and without the ball from the back, and it proved costly with a dysfunctional performance following.

Sakho has become known for his ability to start attacks and inject tempo from the left — occupied by the woeful Lovren — and while Kolo Toure did a solid defensive job, the Reds lacked similarly on the opposite side too.

While Toure’s 42 passes were basic and unambitious, Lovren’s distribution was dreadful throughout — despite the Croatian boasting the highest amount of passes of any Reds player — including twice failing to complete needless cross-field balls in the first half alone.

Lovren rarely looked to play into midfield, instead choosing to derelict responsibility and take the easy pass inside to Martin Skrtel, which in turn continually allowed Besiktas to push higher and exert pressure on Rodgers’ team – and that they did as Liverpool failed to escape the relentless pressure in the second half.

With Rodgers having spoken of the importance to retain balance as the team continues to gather momentum, it is plain to see why the Reds boss has been slow to move Can into a midfield position, with the solidity the German provides alongside Sakho a fundamental feature of Liverpool’s play.

The young Spaniard was another of the few to emerge with any credit on the night as he displayed a solid figure both defensively and offensively for Rodgers’ side.

As tenacious and adventurous as always, Moreno carried the fight for Liverpool – registering only one less key pass than Sterling, Sturridge and Balotelli combined – and his willingness to support a blunt attack alongside providing excellent protection in front of the suspect Lovren deserves credit.

This was epitomised when the Spain under-21 international tracked back superbly to make a goal-saving challenge in the Liverpool box just when it appeared the Turkish side were about to take the lead in the tie.

Where others showed little desire to graft, Moreno displayed it in abundance – recording four tackles as well as three interceptions and clearances.

After a period out of the team, the 22-year-old has responded perfectly and unquestionably has made the left wing-back slot his own.

Big Players Fail to Rise to the Challenge

On a night when leading stars were required to step up to the occasion, certain members did everything but that.

Raheem Sterling and Daniel Sturridge in particular endured disappointing nights, both being dispossessed a staggering six times each. Alongside contributing little to the attack, the pair produced spiritless showings in their contribution to the team — making only 65 passes combined, just three more than Allen.

Sturridge messed about in front of goal after being released by Mario Balotelli in the first half wasting a huge chance, and Sterling also was guilty of some poor play including opting to turn and shoot despite the onrushing Can ready and waiting for a lay-off to strike at goal.

Not often you say Liverpool have carried Sturridge and Sterling, but both are really struggling in this game

Off the ball, the duo abandoned responsibilities to work for the team – failing to press and battle in a physical encounter – and the lack of respite provided from the England men, especially second half, kept the Reds on the back foot and ended any hope of nicking a vital away goal.

Moreno MOM for me tonight. Thought Skrtel and Toure also did well. Sturridge and Sterling the two big disappointments. #LFC

A shoddy and bizarre penalty shoot-out arrangement ensured that there would be no reenactment of the heroics of Istanbul 2005.

With Sterling seemingly opting to not take a spot-kick, it was left to the courageous Lovren to feature amongst the five takers — a brave but dangerous decision which ultimately proved predictably fatal.

As if Lovren’s inclusion in the five wasn’t bold enough, especially ahead of Sterling, Moreno and even Kolo Toure – who scored recently in Ivory Coast’s African Nations Cup penalty triumph, the Croat was handed the responsibility of taking the most important and pressurised penalty.

Lovren on ya last penalty. Wow.

While of course it cannot be predicted how the lottery of penalties will pan out, it makes no sense putting the least favoured taker of the lot last in the order – up for what can potentially provide the make-or-break moment as it inevitably did.

While Rodgers was right to select from those who seemingly wanted to step up, the ordering of those taking was still baffling.

That couldn't have gone any worse for LFC tonight.

Rodgers’ squad have little time to reflect on what was the worst possible night in Turkey, and the Reds must regroup quickly ahead of City’s imminent arrival for Sunday’s midday kick-off.