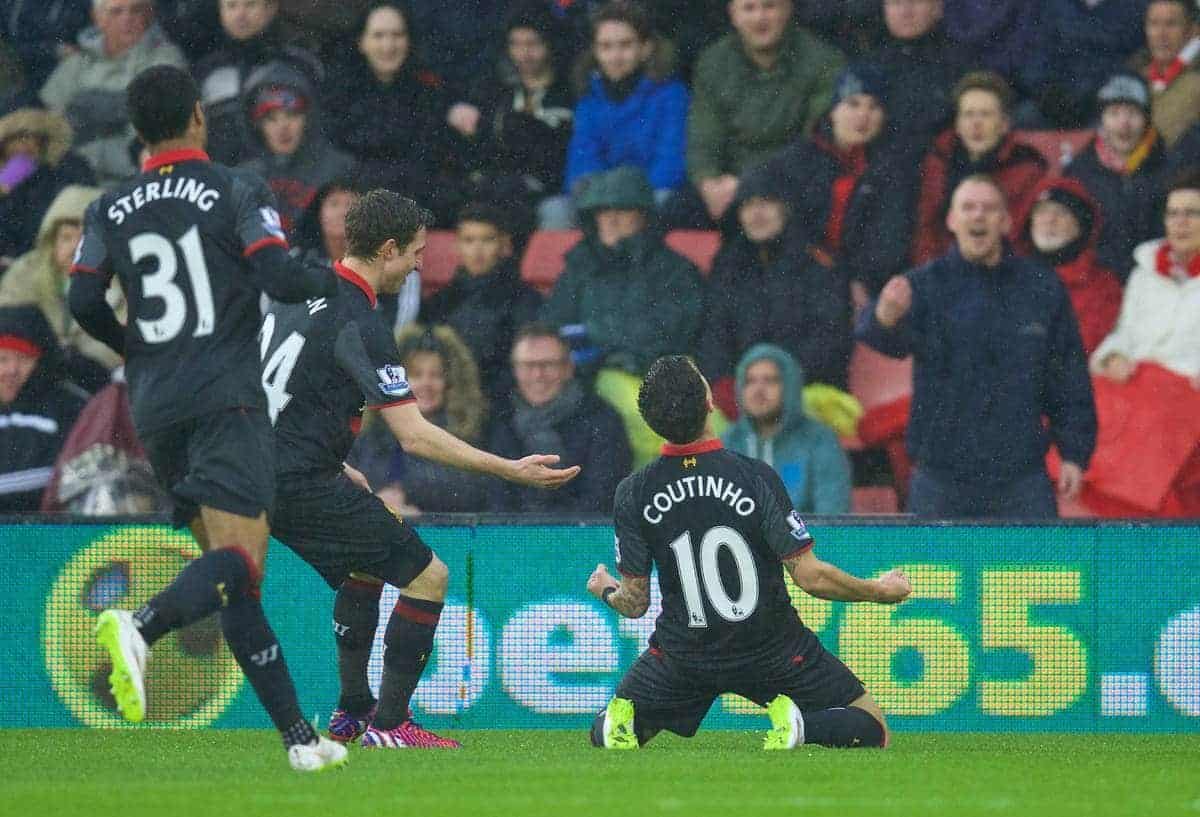 Goals in either half from Philippe Coutinho and Raheem Sterling helped Liverpool to a very professional away victory at Southampton on Sunday afternoon to edge the Reds closer to the top four.

Coutinho’s wondrous strike early on got Brendan Rodgers’ side off to a fantastic start — the Brazilian’s shot from distance rattling in off Fraser Forster’s crossbar.

Dejan Lovren, standing in for Mamadou Sakho who missed the trip to the south coast with a hip injury, endured the wrath of the Southampton fans throughout the game and after a nervy first 45 minutes, settled into comfortably into the game.

Sterling’s deflected shot on 73 minutes after a slip by Matty Targett found its way past Forster to double Liverpool’s lead as they defended strongly in wet conditions.

Rodgers will be delighted with a very important victory, which leaves Liverpool just two points off fourth place and three points off third, having rested Daniel Sturridge and Mario Balotelli from the starting lineup.

Liverpool are now 10 games unbeaten in the Premier League and leapfrog Tottenham into sixth place.

Attentions turn to Thursday’s Europa League last 32 second leg away at Besiktas in Istanbul, before next Sunday’s Premier League clash at home to Manchester City.

Philippe Coutinho‘s exceptional strike amid a series of controversial decisions from referee Kevin Friend helped Liverpool overcome Southampton 2-0 in what could prove a crucial result in the chase for a Champions League place.

There was no lack of vim and vigour on display in miserable conditions at St Mary’s, where Brendan Rodgers’ side moved within two points of the top four as the season enters the home straight.

Raheem Sterling wrapped up the points by adding to Coutinho’s early wonder goal. However, Liverpool’s seventh win in 10 league matches might not have come about had referee Friend made different calls on a clutch of match-defining incidents.

Brazilian Coutinho’s third-minute effort off the underside of the bar took the breath away of many at St Mary’s, where the home crowd focused as much of their ire – if not more – on Friend as the returning Adam Lallana and Dejan Lovren.

The latter got away with a handball towards the end of a first half which began with Filip Djuricic twice being taken down in the penalty box, yet Friend did not deem the challenges of Emre Can and Joe Allen to be fouls.

Those frustrations were compounded by Southampton‘s belief that Liverpool goalkeeper Simon Mignolet handled outside the penalty area in a first half which ended with the players departing to chants of “One-nil to the referee”.

Liverpool also had a penalty appeal in the opening period but Jose Fonte appeared to get the ball in tackling Sterling, the man who wrapped up victory in the 73rd minute after Matt Targett made a hash of his clearance in wet and windy weather.

Teenage defender Targett’s inclusion was one of three changes made by Ronald Koeman, while Liverpool counterpart Rodgers surprisingly started with Lovren and Lallana from the outset when many expected them to join fellow former Southampton man Rickie Lambert on the bench.

More of a shock, though, was the tempo at which this match began, with just 17 seconds on the clock when Djuricic, making his first start for Saints, appeared to be pulled back by Can in the box.

An already het-up home crowd were furious – frustration compounded in the fourth minute when Djuricic was again taken down, this time by Allen. Again, though, referee Friend saw no foul, with Eljero Elia’s follow-up strike saved.

The latter call denied Saints the chance to level as Liverpool had made the breakthrough after just two and a half minutes.

Coutinho did the damage and in some style, taking aim from 25 yards with a dipping drive which flew into the top left corner, clipping the underside of the bar.

It was an exceptional goal and one the hosts were determined to cancel out.

James Ward-Prowse struck wide, with Fonte seeing a tame header easily saved before denying Sterling at the other end – a fierce challenge which was rightly adjudged not to be a penalty.

It was, however, a risky tackle in such poor conditions, and so too was the late challenge on Ward-Prowse which saw Lovren become the first player booked two minutes before the break.

The former Southampton defender could have received another after handling in the box.

There had been another potentially game-changing decision just before that when Mignolet raced off his line to block Elia, with Southampton convinced the ball clipped his hand outside of the area.

Morgan Schneiderlin and Sadio Mane were introduced in a bid to help Southampton‘s chances of a leveller, with the latter seeing a close-range strike blocked by Martin Skrtel after a wayward Graziano Pelle effort.

Maya Yoshida’s quick reaction denied Daniel Sturridge at the other end, shortly after the England international replaced Lallana, who exited to boos from the home fans.

Southampton, as in so many recent games at St Mary’s, were struggling to break down the opposition and fell further behind in the 73rd minute.

Targett, back in the side after a head injury, slipped when attempting to clear a Alberto Moreno cross and Sterling pounced, firing past Fraser Forster.

Dusan Tadic saw a low, 25-yard free-kick saved and Sturridge tested England colleague Forster as the game wound down, with Schneiderlin attempting an overhead kick before the final whistle saw Liverpool move within a point of the home side.