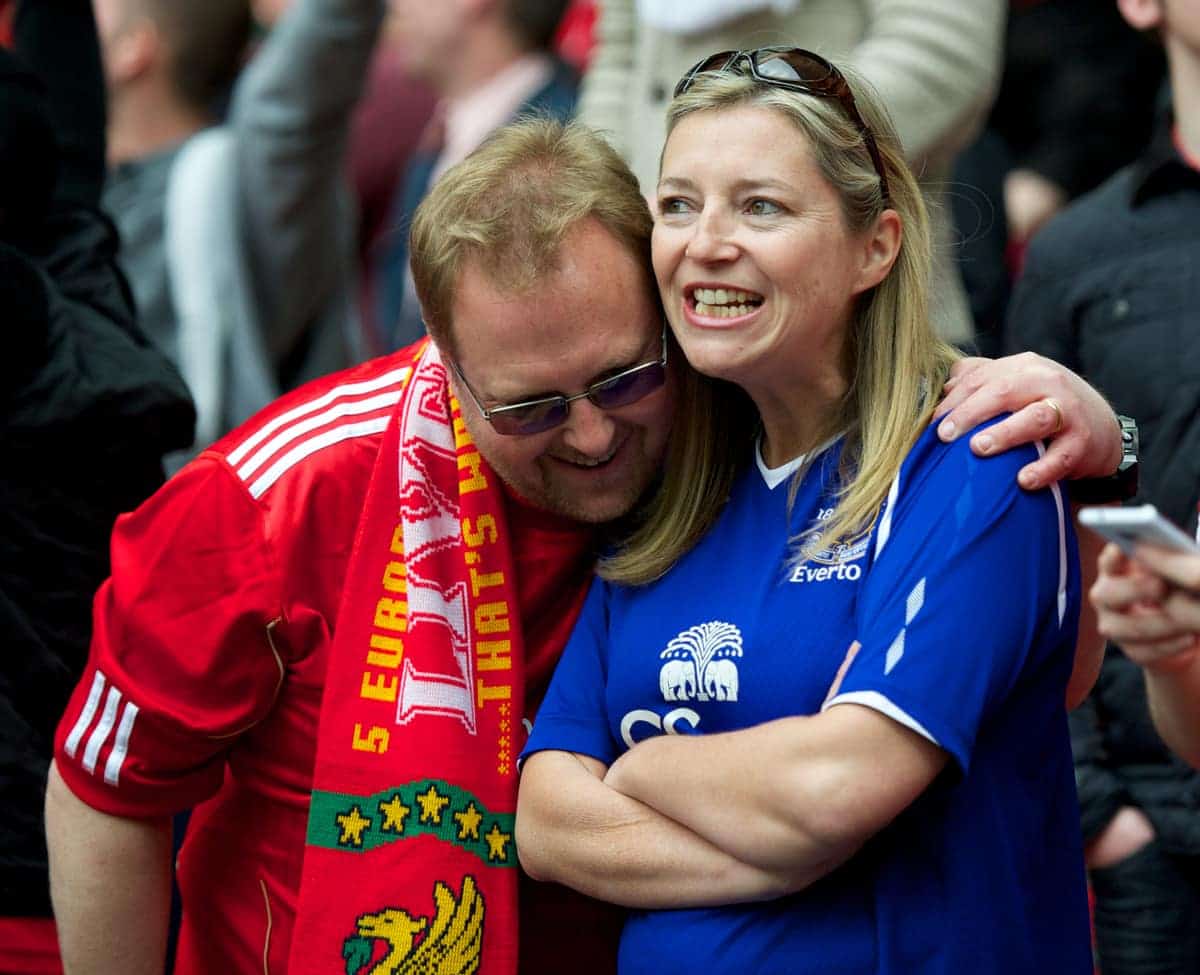 After Merseyside Police’s predictions of disorder prove unfounded, Jeff Goulding discusses his fears about segregation and the future of the derby. It was 14th April 2012 and I was travelling back from Wembley with my son. Andy Carroll had broken blue hearts in the 87th minute and we were looking forward to another trip to the capital, this time for the final. Our coach pulled into a service station, right next to a bus full of Everton fans.

As we filed off to stretch our legs, one of our own shouted “Blue and White Shite Hello”. This is the now traditional greeting used whenever the two halves of the city meet in a footballing context. There was no tension, no snarling and no fists flying.

“Sorry mate I don’t speak Norwegian” came the reply, as dry as the pubs around Wembley at full time. There was laughter on both sides. Then a Red noticed the ‘Everton FC, Official Southport Supporters Association’ sign on the front of blue bus. “You’re not even from Liverpool” he shouted. We parted without a punch being exchanged, only chants of “We pay for your flower show.”

It had been like this all day. Earlier Joe and I had forced our way through throngs of supporters, decked in Red and Blue and mingling freely without a hint of trouble. We were heading for the Bobby Moore statue, where we would meet my sister and her husband who were both Everton fans (don’t ask, my family don’t like to talk about it). We would also be joined by my brother and father and law, also Blues.

This meeting had been planned for days. We wanted a photo outside Wembley with us all in our colours; two clubs; one family. We took our pictures, uploaded them to approving mates on Facebook and parted having shook hands and wished each other a good game. Neither of us wanted the other to have anything other than a terrible game but, after all, until kick off came around we were still family.

Of course there are those on both sides of the divide who don’t see it this way. Over the years, especially throughout the 90s, an unpleasant atmosphere has emerged. A minority of fans have gone too far at times. We did witness some of this on our way to the semi-final that day. I’m talking about idiots behaving the way they always do in their day-to-day lives, only this time they were on their way to a match.

One bluenose, enjoying a ‘ciggie’ next to his coach with a group of his mates, chanted “murderers!” at some reds sipping from beer cans in the car park. One of them responded by throwing his can at the Everton fan. His mates stepped in and restrained him. Others who were gathered round shook their heads. The incident was over save for a few salvo’s of abuse from both parties. “Nob heads” said the guy behind me. I turned and nodded in agreement. I couldn’t tell you now who he supported. It’s not relevant anyway.

It was a day totally representative of the Derby down the years, at least in my experience. It’s never been a Woodstock on the Mersey. We’ve never worn flowers in our hair. There has always been the odd drunken skirmish amisst the friendly banter. The Merseyside Derby though is not about rival factions. It’s more like a sibling rivalry.

Think about how you feel about your brother or sister. At times you are fiercely competitive, it is joyous to get one over them and then there are times when you can’t stand them. However, if anyone outside the family dares to have a go at them, you close ranks faster than the establishment in a cover up.

Saturday’s derby saw a poignant example of this as Everton unveiled a plaque in honour of the 96. As a club the blues have stood shoulder to shoulder with Liverpool for 25 years. Before the game reds captain Gerrard spoke of his love of the banter between fans “Everton are a great club but come kick-off I only want to beat them”, he said.

The peace collective statue was brought to the game on Saturday. It depicted two world war one soldiers shaking hands over a football placed in the mud. One was German, the other British. One wore a red scarf the other blue. It was a great metaphor for the historic rivalry unfolding on the day. Away from the battle on the field we are all just football fans who love are club. Brothers, sisters, husbands, wives, work and schoolmates when the game is over; but Reds and Blues for 90 minutes.

It is for all these reasons that I regard the actions of Merseyside Police to be shameful and unjustifiable. What the two clubs have sought to bring together over decades, the Police have torn asunder. David Prentice, of the Liverpool Echo, penned a fantastic piece on the poison of segregation this week. I couldn’t hope to better it so I’ll just recommend you read it yourself.

Suffice to say the policy of preventing reds and blues from sitting next to each other is an appallingly backward step, and will only increase the sense of separateness we see at other derbies, and which we have resisted for decades.

The ‘friendly derby’ is a sporting institution this country should be proud of. It is being dismantled before our eyes. Not by fans, but by the authorities. This is our game not theirs. There is no history of problems at the derby, apart from the odd idiot on both sides making a show of themselves. Therefore there can be no justification for the trebling of police numbers on Saturday. Areas around the ground were more reminiscent of Marshall Law than a football match.

We are witnessing the demise of one of the greatest rivalries in football. One based on fierce competitiveness, brotherhood and humour. If we continue to sleepwalk, we will lose the spirit of the Merseyside derby forever. Is this what we want?

For me there could be no greater answer to the actions of the authorities on Saturday, than for both sets of supporters to hold a public display of unity at the next derby. How great would it be if ‘Spirit of Shankly’ and ‘Blue Union’ organised a joint march across Stanley Park to the game. We are not what they portray us to be. We are Two Clubs – One City.