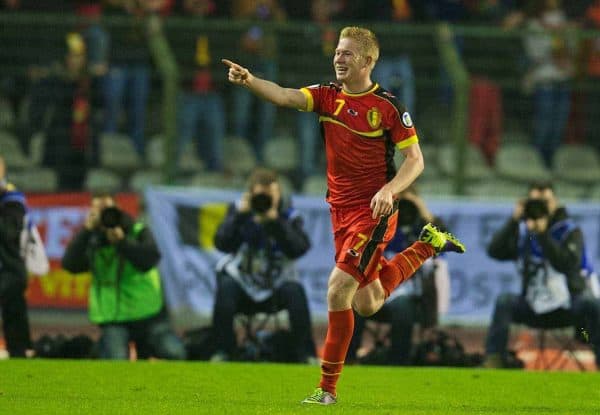 Ahead of the summer transfer window, PJ Vaughan looks at six young players who Liverpool should look to sign, including VfL Wolfsburg’s Kevin de Bruyne.

Liverpool have improved greatly this season since changing formation to 3-4-2-1, and Brendan Rodgers may look to continue this successful system long into the future.

The summer transfer window offers him the opportunity to enhance his side with this in mind.

However, the club are finding it increasingly difficult to go for the very top players, so they may need to get the players before they become superstars.

John Stones is probably the most comfortable centre-back in possession (alongside Emre Can) in the Premier League.

He would fit perfectly into Rodgers’ side and free up Can to play in midfield on occasions.

If Liverpool do continue with a back three, they realistically need to have at least five top centre-backs to cover all positions. Kolo Toure is not getting any younger and Dejan Lovren just seems to be a liability.

Stones plays like Alan Hansen, and is still a good way from his true potential.

While Everton may not want to sell him to Liverpool, players have moved between the clubs in the past. Every player at a club outside of the top six has a price.

If we can’t afford Stones, a cheaper option would be West Ham United’s Reece Oxford. He plays in a similar fashion to Stones but lacks experience and would take a few years to progress.

De Bruyne is an exciting attacking player that never really got a chance at Chelsea; the few opportunities he did have were usually as a wide player.

Since he has gone to VfL Wolfsburg he has played a lot more as an attacking midfielder and has being in sensational form especially this season.

De Bruyne would offer an extra ingredient for Liverpool as he makes intelligent runs beyond the strikers, he is also quick and an excellent finisher. He would also create more space for the likes of Philippe Coutinho and Daniel Sturridge by stretching defences.

He could be a key ingredient in unlocking defences away from home domestically and in Europe.

Jose Maria Gimenez is an aggressive centre-back that is both strong and athletic. His no-nonsense style of defending has started to gain attention in Spain and beyond.

Gimenez would be a natural successor to Martin Srktel.

Atletico Madrid reportedly turned down £17.5 million bid for Gimenez from Manchester City in January. However, their debts are believed to be around £400M so they will probably have to sell two players each season for the next few seasons.

While Gimenez and Stones would both be expensive they would box off the centre of the defence for years to come, and neither would be on huge wages.

Gimenez and Mamadou Sakho could offer the steel in defence, while Can and Stones would offer a little bit of elegance.

Liverpool could probably leave him on loan for the season, waiting twelve months before making a move might mean missing out altogether.

While Simon Mignolet‘s form has improved greatly in recent times, it is clear Liverpool do not have a lot of quality in the back-up goalkeeping position.

Simone Scuffet is a young keeper that could offer that, and has been likened to a young Gigi Buffon.

Scuffet made his debut for Udinese last season as a 17-year-old when the club had an injury crisis, and he was outstanding on a number of occasions, alerting Chelsea, AC Milan and Atletico.

This season he has had to settle with being back-up goalkeeper.

Scuffet would put enough pressure on Mignolet so he does not become complacent. He would most likely be prepared to bide his time at the club on the bench for a couple of years, until he is ready for the first team.

Udinese are a selling club if a club makes the right offer.

Andrew Robertson isn’t the most glamorous player on this list but he could be a huge asset in the left wing-back role. Arsenal and Manchester United started looking at signing Robertson soon after his move to Hull City.

Robertson is a fantastic athlete who resembles Alan Kennedy and Jim Beglin.

He has adjusted well to the Premier League this season and has now become a Scottish international, but it is safe to assume he will really kick on next season.

He would be a fantastic left wing-back for Liverpool.

This signing is fairly low risk and Robertson wouldn’t be on huge wages; he could well be one of those under-the-radar signings.

Sergi Samper is a young defensive midfielder that has yet to fully make the step up at Barcelona, but has been identified as the man that will finally take over from Xavi for some time now.

Samper rarely gives away possession and is very comfortable on the ball.

He is also capable of splitting defences with his passing.

However, while Xavi has played less and less this season, Samper is yet to truly establish himself in the first team.

If Barcelona were to let him go, they may well insert a buy-back clause. While this might not be ideal it would surely be worth the risk.

Champions League money is to increase next season and with the big wages coming off the books, it would be possible to have one big outlay on players in a four-year cycle and comply with Financial Fair Play.

All of these players are young and hungry and would surely make Liverpool a better team and squad and fit perfectly into how they now play.

Which young players would you most like Liverpool to sign in the summer? Let us know in the comments below.