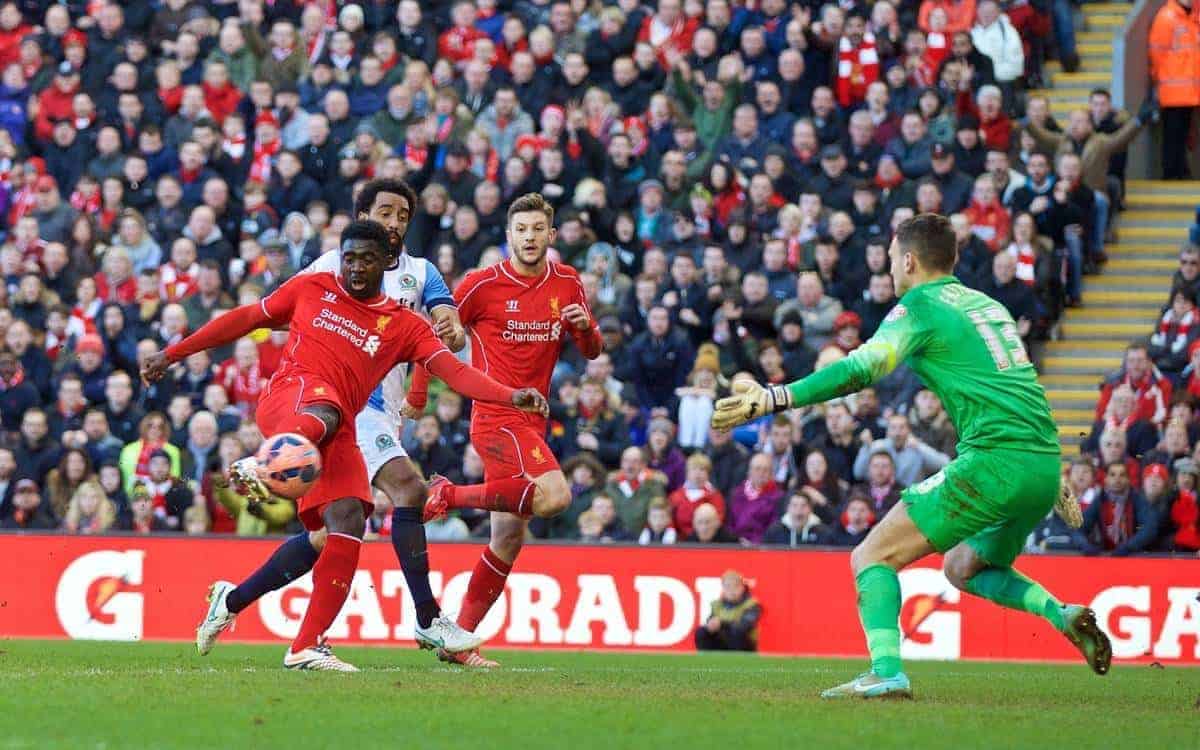 Liverpool could only draw 0-0 with Blackburn in the FA Cup quarter-final at Anfield on Sunday. We rate each of Brendan Rodgers’ players on a frustrating afternoon on Merseyside. The Belgian was one of Liverpool’s better players, and his wonderful save to deny Alex Baptiste arguably kept his side in the cup.

The 27-year-old was confident with his handling all game, barring one clumsy attempt at a punch early on, although his kicking was a little erratic at times.

It’s very easy to get on Johnson’s back, given how woeful he has been over the last couple of years, but he actually had a fairly solid game.

He used the ball well on the whole, barring the odd trademark lapse, and he produced a couple of decent bursts going forward. He will be criticised by some because of who he is, but that is unfair.

He was though, very ponderous in possession on occasion.

Skrtel only lasted a couple of minutes, having fallen nastily after an aerial challenge with Rudy Gestede. Replaced by Kolo Toure after an eight-minute stoppage.

Rodgers said post-match that the Slovakian was walking and talking fine but will go to hospital purely as procedure.

The former Southampton man has improved in recent weeks, but he was back to his very worst against Gary Bowyer’s side, especially in the first half.

He was wasteful in possession, suspect positionally and an all-round weak-link. Some players eventually come good, but you have to wonder whether Lovren ever will.

Can has been such a superb signing so far, but he had an off day in a rare midfield role.

Too often he tried too much on the ball, and his general influence wasn’t as great as it has been of late. The young German definitely looks more comfortable at centre-back for now, although his future may well lie in midfield.

Liverpool’s soon-to-be permanent captain was once again an impressive figure, as he desperately tried to inspire his team to victory.

He showed a good array of passing, worked his socks off throughout and looks more and more like a leader by the week. The 24-year-old has had better games, but he was still arguably the Reds’ best outfield player.

Not up the standards of Man City and Burnley but that can only be expected with this the third game in eight days.

Markovic blew hot and cold all game, and it’s getting to the stage where we need to see a bit more consistency from him.

The 21-year-old showed some good bursts of pace down the right flank, but his final ball was often more hopeful than incisive. Arguably wasted out wide.

Replaced by Mario Balotelli after 59 minutes.

The England star was deployed at left wing-back, and although he did a pretty decent job there, he was still wasted in the role.

His pace and trickery made him one of Liverpool’s more dangerous attacking outlets. He did some good defensive work too, in fairness.

Like Markovic, Lallana just cannot seem to find any consistency at the moment. He often looks more dangerous than he is, and was frustrating to watch throughout.

The usual nimble footwork was out in force but nothing really came of it, and time and time again he held onto the ball for too long. He was switched to the right-hand side in the second-half, but was ineffective there. After such a wonderful run of form, Coutinho had a very poor game by his high standards.

The 22-year-old Brazilian was nullified expertly by the Blackburn midfield, and he was very guilty of trying the impossible when an easier option was called for. He was due a bad game to be fair to him.

Blackburn defended deep which forced Coutinho to drop deeper and deeper to receive the ball but lacked any movement ahead of him.

Sturridge still looks well short of his sharpest, and he was disappointing again.

He produced the odd nice touch here and there, and tested Simon Eastwood in the first-half, but his all-round game was sloppy and he was kept very quiet in general.

The likeable veteran was introduced early following the injury to Skrtel, and he did a solid job. He made one vital tackle in the first-half, and rarely put a foot wrong. Ironically our biggest attacking threat having hit the post and had one disallowed.

The Italian looked relatively dangerous when he came on, holding the ball up and running into the channels, but one typically erratic shot from distance summed up his unpredictability.

The Reds manager didn’t have his finest hour. His decision to play Sterling at wing-back didn’t really pay off, and switching Lallana to the right in the second-half made little sense.

A frustrating match in isolation but in the bigger picture, a replay isn’t so bad.

Marriner was horribly whistle-happy all afternoon, and there were several strong penalty claims that he waved away. He was a big reason for the game having so little flow to it.