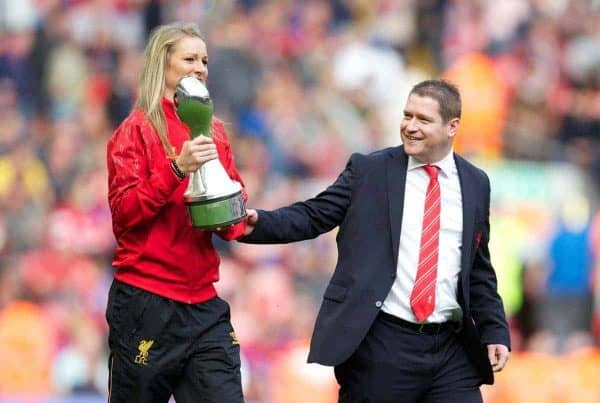 Manager Matt Beard has called this his strongest squad yet, having acquired four impressive new signings, including African Women’s Player of the Year Asisat Oshoala, and the return of Lucy Staniforth from a year-long injury lay off.

This season marks the second year of the expanded WSL, Everton Ladies were the first casualties of the newly introduced relegation last season and will be battling 9 other teams in WSL2 for one of two promotion spots; from 2016 WSL1 will have 9 teams.

Satara Murray is an attack-minded defender who can play comfortably across the back four, during pre-season Murray has performed well at centre-back and looks to be the new partner for Gemma Bonner in the centre of the reds defence. Murray joins Liverpool straight from college, after a successful 4-year stint with North Carolina Tar Heels; the college that also hosted former Liverpool defenders Whitney Engen and Lucy Bronze.

Ingrid Ryland (pictured above) has also arrived to bolster the Liverpool defence ahead of the 2015 campaign, signing for the club from the Norwegian league where she has spent her entire playing career so far with Arna-Bjornar. Ryland is a physically strong right-back who can also assist in the reds attack, which suits Liverpool’s style of play and reflects that of Corina Schroder who plays on the left.

The second Norwegian to join the club this winter is Line Smorsgard, a 27-year old striker who joins from Klepp IL. Smorsgard can also play on either wing and will prove a great addition to Liverpool’s formidable front line, in pre-season Smorsgard has looked better as the games progressed after missing the first game through injury and scored on her debut during the 8-0 mauling of Derby County last month.

Liverpool’s capture of African Women’s Player of the Year Asisat Oshoala (pictured below) could prove to be the signing of the season; named player of the tournament and winning the golden boot at last summers U20 World Cup, Oshoala was reportedly being chased by a number of Europe’s top clubs. Impressive already during pre-season and still only 20-years old, Oshoala is an exciting signing for Liverpool Ladies.

Liverpool Ladies Development Squad have enjoyed an excellent season so far (their season runs from October-May) with many players featuring for the first-team during pre-season.

The team completed an 11-game winning streak which saw star striker Ashley Hodson score four hat-tricks and a win over the first-team of Blackburn Rovers during a friendly. Players to have featured for the first-team so far include Emilie Revitt, Bethany Donoghue, Vicky Rumsey and FA Youth Cup winning trio Rachel Darbyshire, Mayumi Pacheco and Kess Elmore.

Last season Matt Beard gave a number of youth players the opportunity to integrate with the first-team, we could well see the aforementioned players feature during the campaign and there is a host of others waiting in the wings, including development team captain Shannon Beckwith and attacking midfielder Mollie Green who recently scored for England U19s.

The Ladies kicked off pre-season in style with a 4-1 home win over WSL2 side Aston Villa, Natasha Dowie opening the scoring and a trialist also netting just before half-time. Villa pulled a goal back early in the second half before Dowie scored her second and debutant Satara Murray headed over the line from a corner to round off the scoring.

Next up came an 8-0 victory away at Premier League team Derby County, this game was part of Derby’s 25th anniversary celebrations but Liverpool showed no mercy with 3 goals before the break and 5 in the second half. Kate Longhurst and Fara Williams both scored twice, with Nicole Rolser, Natasha Dowie, Corina Schroder and Line Smorsgard also on the score sheet.

Matt Beard’s reds were back at home 4 days later with the visit of Yeovil Ladies, a WSL2 club who had recently signed Bristol Academy’s club captain Corinne Yorston. Yorston contributed to Yeovil’s strong defensive display on the afternoon as they kept a clean sheet, it wasn’t Liverpool’s afternoon in front of goal as they struck the crossbar 3 times and conceded from a corner midway through the second half for their first and only defeat of pre-season.

With a host of players away on international duty, a 60-minute friendly with Everton Ladies was arranged at the beginning of March. Both sides were missing key players however stayed true to the occasion of a Merseyside derby with a tight game and plenty of challenges flying about. Liverpool ran out 1-0 winners thanks to a Natasha Dowie tap-in from yards out, this came minutes after Nicole Rolser’s strike was cleared off the line by former red Megan Alexander.

The final pre-season game seen Liverpool Ladies welcome Doncaster Belles and their new manager Glen Harris to Widnes. Fara Williams and Gemma Bonner started on the bench just days after winning the Cyprus Cup with England but came off the bench at half-time for Bonner to open the scoring from Williams’ corner. Liverpool’s lead was short-lived as Doncaster’s Emma Lipka latched on to a back pass to equalise for the visitors and the game finished 1-1.

Liverpool Ladies start the defence of their Women’s Super League title with a visit from newly promoted Sunderland Ladies. Liverpool faced Sunderland twice last season in both The FA Cup and Continental Cup, winning both with 8 goals scored and 0 conceded. Sunderland will be up for this game however with it being their first in the top division and Liverpool will want to get their campaign off to a winning start. The game will be screened live on BT Sport and kicks off at 7:45pm.

Once again Chelsea Ladies will be the first away game for Liverpool in the league and this could prove one of the toughest games of the season. Both teams have strengthened their squads since the end of last season, the final day seen Chelsea lose 2-1 to Manchester City while Liverpool beat Bristol Academy 3-0 to pip the Londoners to the title on silverware.

Due to scheduling Liverpool face Manchester City twice in a week, this away game comes 4 days after the home tie with 6 very important points on offer. Many are tipping the Manchester side for the league title this season, with their new signings including Liverpool’s Lucy Bronze, England international Demi Stokes and Wales’ Natasha Harding amongst others. City won the Continental Cup last year, yet their league form was questionable.

Arsenal Ladies have picked up 3 points in this tie for the previous 4 seasons, despite Liverpool ending their almost 2-year unbeaten run at the Emirates in 2013 and pulling back a 3-1 deficit to draw 3-3 at the Gunners home ground Borehamwood last October. Like Chelsea and Man City, Arsenal have added quality to their squad during the off-season; most notably with the return of Lianne Sanderson from the American NWSL.

The past two seasons have seen Bristol Academy visit Widnes to watch Liverpool Ladies lift the title on the final day of the season, this year the powers that be have decided to shake things up a little and have Liverpool head to Bristol for their final league game. Both titles the reds have lifted so far have been decided on the final day and this season could be no different with 4-5 teams looking capable of mounting a serious title challenge.