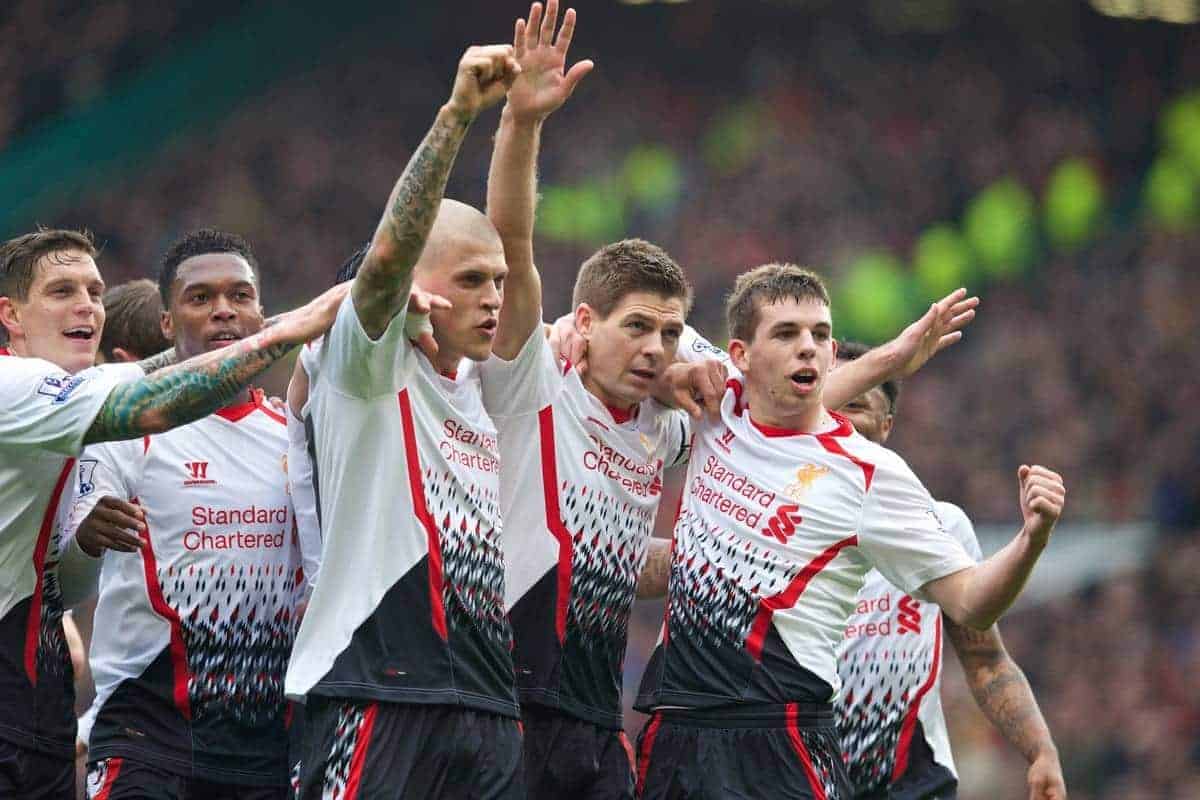 Ahead of Liverpool’s crunch clash with Manchester United, on Sunday at Anfield, Josh Sexton looks back at the Reds’ five best wins vs. their North West rivals, over the last decade. Liverpool advanced to the fifth round of the FA cup courtesy of a late winner from Dirk Kuyt, after goals from Daniel Agger and Ji-Sung Park had left the tie heading for a replay.

Kuyt got onto the end of an Andy Carroll flick on and fired past David De Gea, to cap off a great couple of days for Kenny Dalglish’s men, after they had beaten Manchester City to reach the Carling Cup final, just three days before.

The Dutch striker’s late winner would help see Liverpool on their way to a second Wembley final of the season, in which they narrowly lost to Chelsea.

Liverpool recorded a comfortable win over Sir Alex Ferguson’s men courtesy of goals from Fernando Torres and David N’Gog, to lift the pressure on manager Rafael Benitez, after their worst sequence of results since 1987.

The win was satisfying not only because of the Reds poor form in the build up, but also because there aren’t many better things than getting one over on your rivals.

The relief and ecstasy at Anfield that day was best captured by Pepe Reina, who ran the entire length of the pitch to join in the celebrations of N’Gog’s stoppage time goal.

In a typically heated clash both Nemanja Vidic and Javier Mascherano were sent off, as the United fans mocked the famous beach ball goal incident at Sunderland, but the Liverpool fans would have the last laugh, taking home all three points. A hat trick of Kuyt tap ins saw Liverpool brush aside their rivals on a day in which Anfield got to witness the magic of Luis Suarez.

The Uruguayan single handedly wriggled through the United defence before leaving Kuyt with a wide open goal to finish it off, and moments later Suarez’s cross was headed backwards by Nani and straight into the Dutch striker’s path for his second.

Suarez also played a part in the third goal as his free kick was parried by Edwin Van der Sar, but it fell to Kuyt who finished it off for his hat trick, rounding off a wholly satisfying day for Liverpool fans. Liverpool displayed their title credentials with an emphatic win over rivals United at Old Trafford, courtesy of two Steven Gerrard penalties and a Suarez goal.

It was a day of complete misery for David Moyes, as his side conceded three penalties, in one of the most comprehensive away performances at Old Trafford in Premier League history.

The victory saw Liverpool close in on Chelsea at the top of the table, continuing their magnificent form, while United were further drifting away from the top four, after a miserable season for Moyes’ men. Liverpool came from behind to batter United at Old Trafford, on a day that saw the title race blown wide open.

Goals from Torres, a Gerrard penalty, a stunning Fabio Aurelio free kick and a lob from Andrea Dossena, rounded off an amazing win for Benitez’s men.

Ferguson endured a nightmare afternoon, watching his captain Vidic get sent off for hauling down Gerrard, after a day of torment at the hands of Torres.

This ended a historic week in Liverpool’s history, after a memorable 4-0 victory over Real Madrid coming just days before the mauling in Manchester.

Which was your favourite win? Let us know in the comments below.