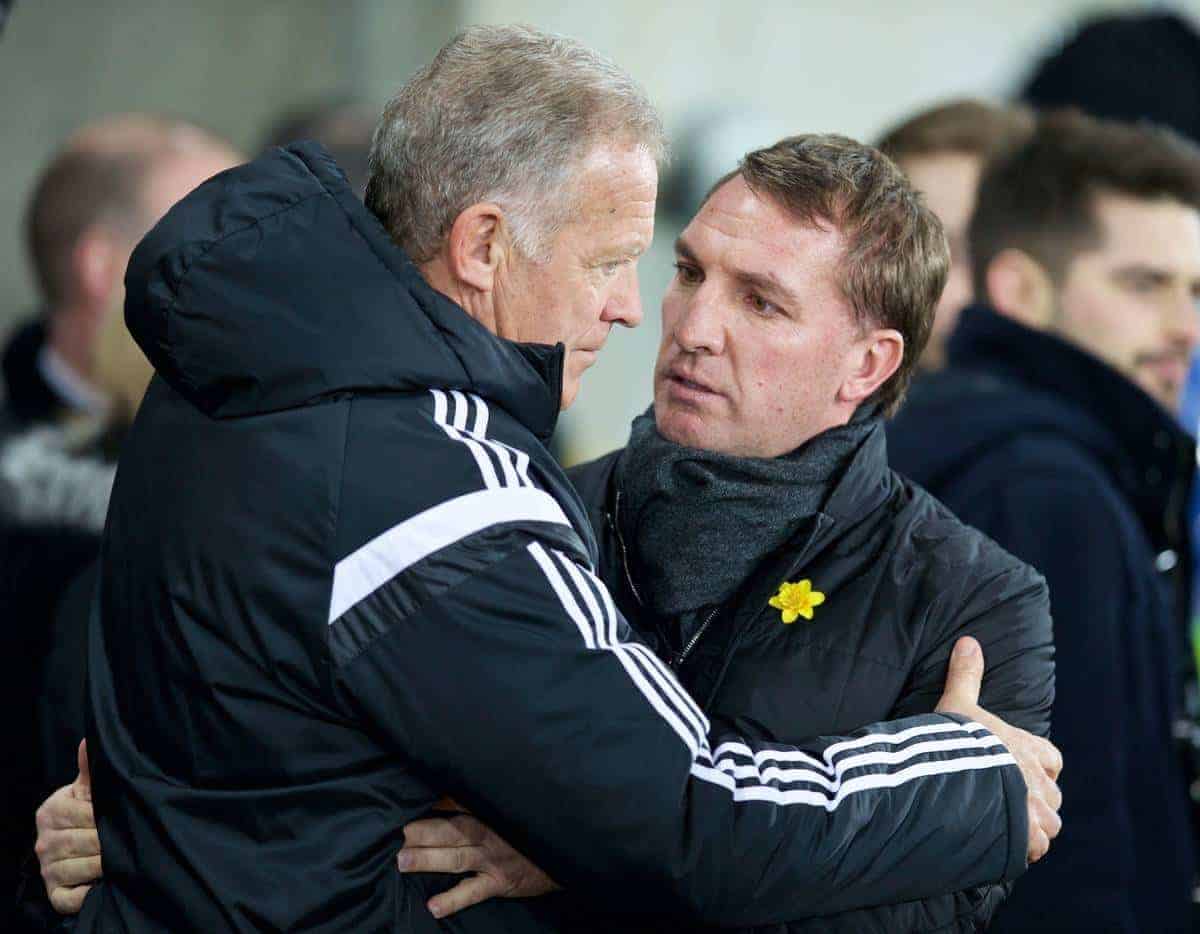 Liverpool manager Brendan Rodgers insisted he had to “pay respect to the team” after skipper Steven Gerrard ended his five-week absence from the bench in a 1-0 win at Swansea.

Gerrard had not featured since the 3-2 home victory over Tottenham on February 10 because of hamstring trouble, but he returned to the fray as a 64th-minute substitute at the Liberty Stadium as Liverpool moved to within two points of fourth-placed Manchester United in the Barclays Premier League.

It was Liverpool’s fifth league win on the spin and they have now lost only twice in their last 23 games in all competitions.

Liverpool’s last league loss was a 3-0 defeat at Manchester United on December 14 and the two sides now meet in a huge Anfield showdown on Sunday, although whether Gerrard will start remains open to debate after Rodgers’ praise for the team in his absence.

“You have to pay respect to the team,” Rodgers explained when asked about Gerrard’s return as a second-half substitute in south Wales.

“The team has been playing very well and getting results and collectively over the last three months we’ve been in great form.

“You’ve also got to pay attention that he (Gerrard) has been out for considerable period of time as well, but you see how important he is when he came on.

“We were able to penetrate when Steven came on and he offered that calmness and control.

“We switched to a diamond with Steven at the bottom and he was very important to that.”

Rodgers admits he has not ruled out a top-two finish after Jordan Henderson‘s 68th-minute winner made the most of second-placed Manchester City‘s surprise weekend defeat at Burnley.

Only four points now separate City from Liverpool in fifth with Arsenal and Manchester United also battling for those coveted top-four spots which will guarantee Champions League football next season.

“We’ve put ourselves in great position,” Rodgers said. “We want to finish as high as we can and everyone talks about fourth, but it’s the same every year.

“We’ll do the best we can and Manchester City‘s result at the weekend gives us an opportunity to finish second.

“We’ve got to use the mentality, run and confidence we’ve got, take that into every game and see where it takes us.”

Swansea manager Garry Monk expressed sympathy for his players who he felt deserved something from the game.

“I’m disappointed for the players, who put a lot of effort in, stuck at it and showed a lot of commitment,” Monk said.

“We deserved something from the game as in the first half we were superb and dominated the game.

“We played some fantastic stuff and I feel it’s an opportunity missed. “We had some good chances in the first half and should have scored one or two.

“When you don’t take your chances, a side like Liverpool will come back into the game, but I thought we played some of our best football in that game.”