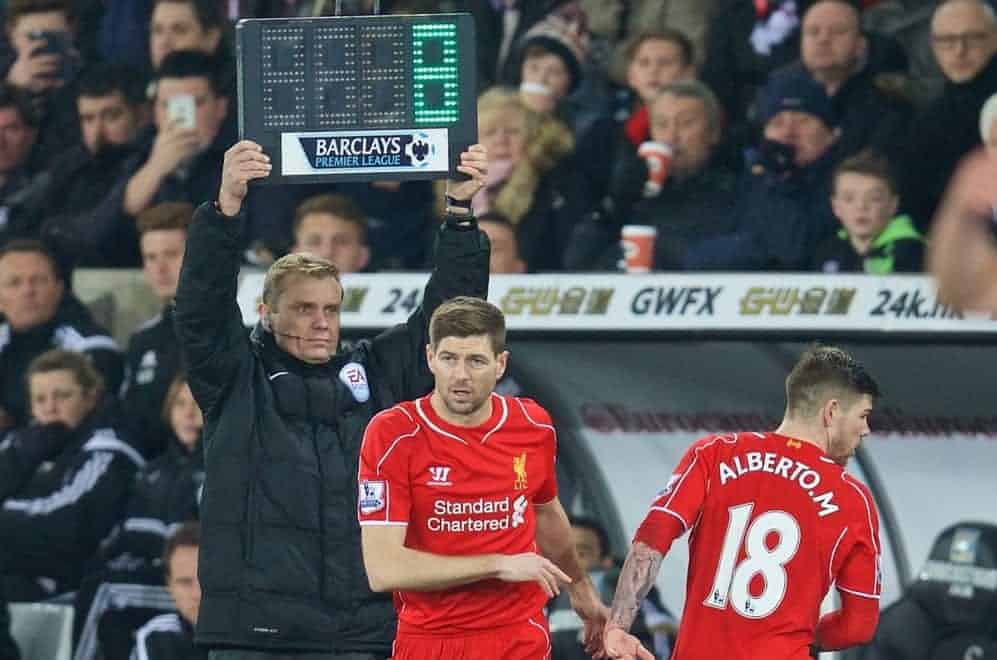 Some tactical ingenuity from Brendan Rodgers deserves a large measure of the credit after Liverpool’s 1-0 away victory over Swansea City, writes Jack Lusby.

A 1-0 victory away to Swansea City was enough to push Liverpool closer to the Premier League’s top four, and some Brendan Rodgers mastery propelled the Reds to another win.

Jordan Henderson scored the only goal of the night with a fortunate deflection, while Liverpool’s defence will be celebrating another clean sheet.

In what was a gutsy win, Rodgers deserves much of the credit for a second-half tactical switch, which involved captain Steven Gerrard returning from injury to play a major role in Liverpool’s Liberty Stadium rejuvenation.

After an eight-day break, Liverpool were expected to be refreshed and raring to go on Monday night, but instead Rodgers’ side looked lethargic and disconnected.

Swansea manager Garry Monk deserves much of the credit for this, with his tactical outlook supressing Liverpool’s thrust expertly; dominating the midfield, Swansea stifled the Reds’ creativity, and the Swans looked most likely to break the deadlock before the break.

At half-time, Liverpool had seen just 39 percent of possession.

Liverpool’s struggle to show their influence was outlined by their three best performers being primarily defensive ones:

Mamadou Sakho won a monstrous seven tackles in the first half against Swansea City. #LFC pic.twitter.com/b4WQNZ8R6L

Joe Allen has made three tackles and three interceptions in the first half against his old club. An excellent midfield display. #LFC

Rodgers’ side looked fairly comfortable for a draw, but a change was needed for any more than that.

With Liverpool looking deflated at half-time, despite a solid defensive effort and some fine contributions from Mignolet, Rodgers needed to formulate a tactical switch in order for his side to gain a foothold.

This came in the 63rd minute, with the largely ineffective and hot-headed Alberto Moreno withdrawn, with Gerrard taking his place.

Liverpool then switched to what is most simply described as a 3-4-3 diamond formation.

Adam Lallana took up a left wing-back role, with Philippe Coutinho moving into a more central No. 10 position, while Henderson and Allen assumed the diamond-flank roles they performed adeptly in last season.

Gerrard, who struggled immensely in the defensive midfield role in the first half of the season, was surprisingly comfortable on his introduction against Swansea, and proved crucial.

The 34-year-old made two tackles and one interception, as well as completing 95.5 percent of his passes in what was a limited role at the base of the diamond—importantly, Gerrard made none of his infamous Hollywood passes on Monday night.

It was Henderson’s persistent running that gave Liverpool victory, with Jordi Amat’s clearance deflecting off the midfielder and into the Swansea goal.

The manner of Liverpool’s victory on Monday night was somewhat uncharacteristic, with Rodgers’ side not having the arrogance, or sheer luck, to pull off a performance such as their first-half offering and still come away with the three points.

But with Liverpool now chasing a top-four placing after a dramatic surge in form in the second half of the season, these victories are crucial.

Rodgers is often criticised for his lack of an in-game ‘plan B’, but the manager disproved this as his ingenious switch to a 3-4-3 diamond nullifying the first-half threats of Swansea.

No longer were Ki Sung-Yeung and Jonjo Shelvey enjoying the freedom of the midfield; no longer was Wayne Routledge tormenting the hapless Emre Can.

Every game is now a must-win for Brendan Rodgers’ Liverpool, but this victory showed the Reds manager has the cajones to rebuild his challenge at the top end of the Premier League table.

What did Brendan Rodgers prove against Swansea City on Monday night? Let us know in the comments below.