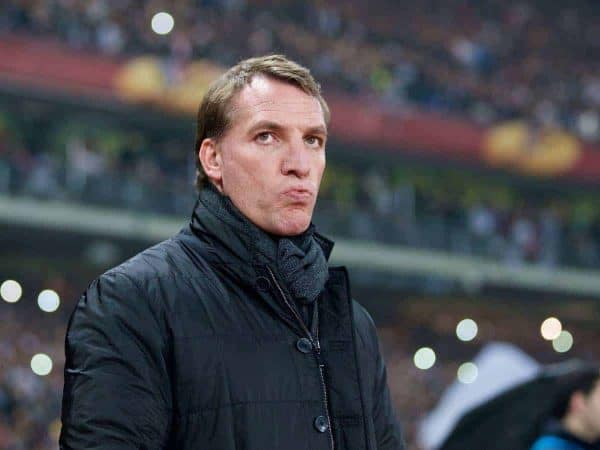 Liverpool manager Brendan Rodgers accepts missing out on the Champions League may make it difficult to recruit top-quality players this summer.

The Reds lost at home to Manchester United before the international break and then went down 4-1 at Arsenal on Saturday to leave them seven points off the top four.

Raheem Sterling's contract stand-off was the main talking point surrounding Saturday's lunch-time televised encounter. While Rodgers has said the England international will be going nowhere this summer regardless of where Liverpool finish, their increasingly forlorn hopes of Champions League qualification will make it harder for the Northern Irishman to add new world-class talent to his squad.

"Most players want to be in the Champions League, but I think also that Liverpool is a great club," the Liverpool manager said.

"I said that before I came into the job, and it is been even more rubber-stamped now that I have been here for two-and-a-half-years.

"We know that, but we just have to continue to fight in order to be a stable club in there – and we will continue to do that."

Rodgers knows unless one of Manchester City, Arsenal and Manchester United falter over the run-in, Liverpool will have to battle it out for Europa League qualification instead.

"We want to be in the Champions League, that is important and it is key for us, but it is highly unlikely this year," he said.

"I wouldn't expect the others to slip up, then add to that the growing number (of players) we have got unavailable and I think it will make it very, very difficult."

Rodgers maintains the hard work must continue to get Liverpool back into the battle for honours, with his side set to face Blackburn in an FA Cup quarter-final replay at Ewood Park on Wednesday.

"We always felt this year was going to be difficult, that was the reality of it," he said.

"Our run last year nearly brought us the title. We lost a world-class player (Luis Suarez) and lots of other developments that happened within the club.

"But it is frustrating that we got ourselves in a position over the last three months, very close, to then come up short in the past two games.

"However, I look at Arsenal and their bench, the players, the world-class players on the field with big talent and it shows the continual work we have to do."

Rodgers added: "It is going to be a little like this, until we become more stable, we have got young players who are growing, getting more experience and then hopefully there will be a period where we qualify again.

"But we don't give up. We will fight right to the end.

"Obviously the FA Cup is a priority for us, but there have been lots of positives from it, looking at players' development, seeing players grow, it has been good.

"We aim to finish strongly and we have an obligation to represent the supporters in the last seven games, and in the FA Cup, to finish as well as we can."

Liverpool were without suspended duo Steven Gerrard and Martin Skrtel at the Emirates Stadium, where three Arsenal goals in the space of eight minutes at the end of the first half effectively ended the contest, with Jordan Henderson netting a consolation penalty.

Midfielder Emre Can will also now be banned for the FA Cup tie following his red card for a second caution during the closing stages.

Forward Mario Balotelli missed the trip to London with a knee problem, so it remains to be seen if the Italian will feature at Ewood Park.

Brazilian midfielder Philippe Coutinho believes the Reds can salvage their campaign by going all the way to lift the the FA Cup final at Wembley.

"Of course, winning the cup would save our season. It is very important for us to have that as an objective," he said.

Goalkeeper Simon Mignolet, meanwhile, insisted the off-field headlines surrounding Sterling's future could not be used as an excuse for defeat to Arsenal.

"No, that had no impact at all. As a player you just focus on yourself and the job in hand," he said.