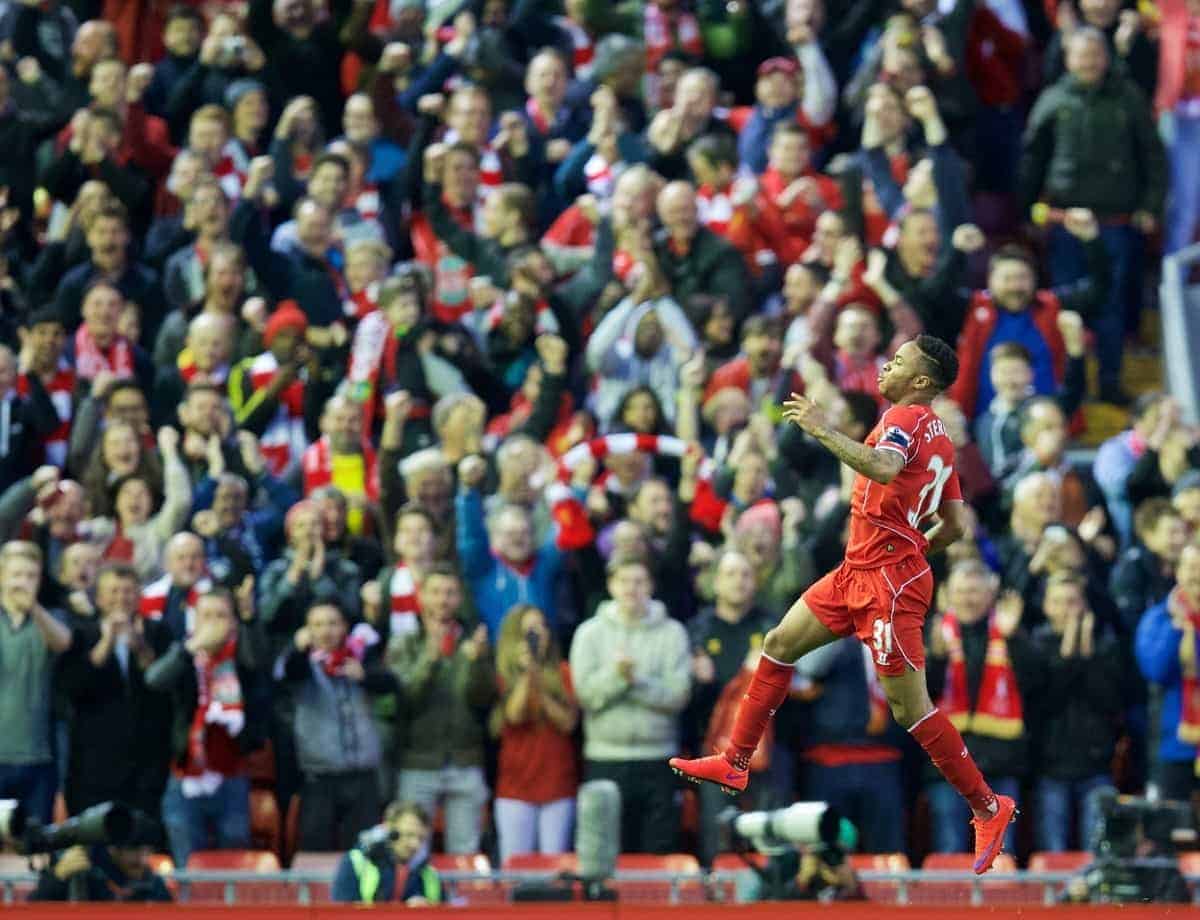 Following the Reds’ comfortable victory over John Carver’s side on Monday night, Ben Twelves picks five discussion topics from the clash at Anfield. Liverpool strolled to a deserved win over Newcastle at Anfield to keep their feint hopes of a top four finish alive thanks to two tidy finishes in each half from Raheem Sterling and Joe Allen.

The 20-year-old cut inside from the left and finished superbly after being found by Jordan Henderson’s raking cross-field pass after just nine minutes. Allen wrapped up the win in the second half when he reacted sharply to smash into the top corner of the Kop net on the half-volley.

Brendan Rodgers’ side produced a controlled performance, bar some moments of madness in the second half, but fully deserved to take maximum points from the fixture – a result that provides the squad with a timely confidence boost ahead of the upcoming FA Cup semi-final tie against Aston Villa at Wembley on Sunday.

Here are the talking points from the win.

The Brazilian magician was at his brilliant best once again for the Reds at Anfield, where he was unquestionably the star man for Rodgers’ side.

Everything good about Liverpool’s play centred around the play-making brilliance of Philippe Coutinho, who was equally as good off the ball as he was on it, occupying the central role in a young and exciting three man attack alongside Sterling and the returning Jordon Ibe.

The ex-Internazionale man’s evasive movement and unpredictability made him impossible to pick up for the away side, who then had to contend with Henderson marauding forward from midfield, leaving the Brazil international to enjoy the space found between lines – and that he did.

> to dip out the front line and create/find space is imperative. Phil did that brilliantly tonight. On the ball, magical and wizardish.

Coutinho took full advantage with his production on the ball proving at times devastating, and while not directly claiming an assist or goal, it was the 22-year-old who made the Liverpool attack click – linking play between midfield and attack, finding the darting penetrative runs of forward players – with two key passes and completing seven dribbles, the most of anyone on the pitch.

The man-of-the-match caused all sorts of problems to a Newcastle team who simply didn’t know how to deal with the threat posed by the little magician, who on form like this is a joy to watch, and if the Reds want to progress to the FA Cup final on Sunday it’s essential that the Brazilian is on his game.

Emre Can Impresses in Centre of Back Four

Slipping into a four man defence for the first time in his short Anfield career to date, the German turned in an impressive and assuring display.

With all manner of defensive craziness going on around him with Johnson and Lovren seemingly seeing who could turn in a worse display, the natural midfielder kept assured, looking more of a central defender than the £20 million man next to him who almost ruled him out of Sunday’s semi-final after landing on Can’s already twisted ankle.

Calm and composed in possession as ever, the 21-year-old managed to produce some of his trademark forward bursts bringing the ball out expertly to spring defence into attack – something seen three times on the night – and he defended decisively dealing well with most that came his way.

Confident and strong on the front foot, Can kept Magpies striker Ayoze Perez quiet throughout and it was from the German stepping forward positively to meet a challenge head on in the Newcastle half that saw him win possession back for his side, which invariably lead to the Reds first goal of the night when Sterling struck home.

Carragher: Emre Can has been Liverpool’s best signing

Having shown that he can perform solidly in both a two and three man central partnership, Can should keep his place alongside Martin Skrtel who must replace Dejan Lovren against the Villains.

On a night when those selected had the chance to stake their claim for a starting shirt for Sunday’s Wembley visit, Glen Johnson and Dejan Lovren played their way out of contention.

The pair were dreadful against the Geordies completely failing in their respective roles both on and off the ball either side of Emre Can, who did his best to not allow the vast amounts of uncertainty around him to effect his own game – something he did very well.

Bloke behind me is booing the Glen Johnson booking, asking the ref to make it red.

At right back, Johnson was sluggish throughout – constantly conceding possession and miss-controlling the ball, being slow to react to danger and lacking in general concentration, shown as he was dispossessed the joint-most amount of times – and it’s disappointing that Rodgers continues to pick him over the far more reliable Javi Manquillo and Jon Flanagan.

Lovren’s presence in the back four proved equally alarming as the Croatian endured a poor night with his distribution, decision making and defensive awareness again causing concern.

Extremely fortunate not to give away what was unarguably a stonewall penalty in the first half which was later followed by a perfect knock-down to Remy Cabella to strike panic once again in the Liverpool back line, the summer arrival did nothing to convince Rodgers to hand him a start on Sunday with Martin Skrtel back from suspension.

Alberto Moreno Returning to Form at Left Back

While a concerning night overall defensively despite a successive clean sheet, the performance of Moreno on the left of defence was certainly a plus point.

The Spaniard – who produced the highest pass completion of any Red with 92.1% – looked far more settled in his natural position than when stationed in a wing-back role in the 3-4-2-1 system formerly deployed by Rodgers, and as a result the 22-year-old turned in a more confident and improved display.

Moreno bossed the left side with his ability to sense danger recording the most interceptions on the night derailing Newcastle attacks, and the adventure in his display that went missing for a brief spell in the alternative formation was rediscovered, as he linked up well with Sterling down the left – contributing to attacks and defending well for the most part.

Moreno – thought he was a great outlet. Did nothing wrong tonight, good fouls when needed, stopped a few crosses. Better crosses too.

The Spain under-21 international provided an excellent outlet for Rodgers’ men – creeping up the left side to drag the Magpies’ right side out of position, in turn creating more room for those inside such as Coutinho to work their magic.

There was a positivity in back in the game of the former Sevilla man, who almost registered on the score-sheet but was denied by a good save from Tim Krul, and it’s essential Moreno builds on Monday’s display.

Top Four Challenge Back On for Reds?

It was essential that the Reds picked up maximum points with the chance to apply pressure to a woefully out of form Man City and they did just that.

The gap from Manuel Pelligrini’s side stands at just four points ahead of the final six games of the season and Rodgers’ men showed that they aren’t prepared to give up on Champions League qualification just yet with the Citizens back in view.

BR on top 4: As we’ve seen last season, a lot can change. Points will be dropped.

On paper, the Manchester side do enjoy the ‘simpler’ of the run-ins with Liverpool still having to go to the home of the soon-to-be champions, but with a team so low on confidence and severely lacking the usual quality in their play, it would not be far-fetched to expect Pelligrini’s men to drop more points across their remaining games.

It is still a big task for Rodgers and his squad who despite failing to make the final step into the top four after a superb run dragged them back into contention, showed they can certainly chase the prize on offer while it’s there, and once again they must concentrate on doing all they can to best position themselves to take full advantage of any City slip up.

BR: We’re looking for other teams to slip up but we’ve got to keep winning. Do that and we’ve got a chance.

Next up for Liverpool – the smaller matter of an FA Cup semi-final against Tim Sherwood’s rejuvenated Aston Villa.