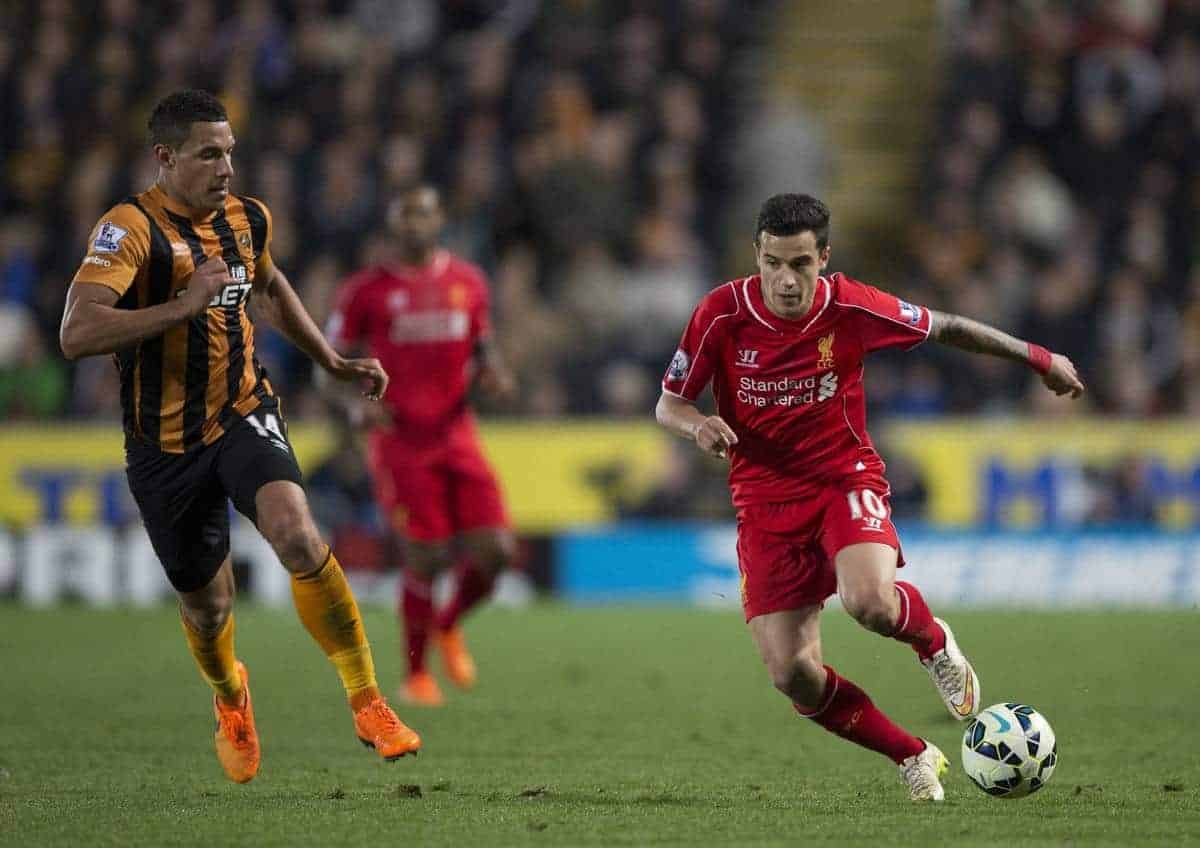 After Liverpool fell to a miserable 1-0 loss away to Hull City in the Premier League on Tuesday night, Jack Lusby provides his player ratings.

While the misery plays out in front of him as Liverpool’s season dies, Simon Mignolet continues to put in solid performance after solid performance, and Brendan Rodgers’ side would have likely been embarassed at the KC Stadium without him.

A fine save from Dame N’Doye’s point-blank first-half header stands out as a highlight from the No. 22, who collected dangerous set pieces bravely and commanded his penalty area well.

Operating again in the right-back role that saw him relatively marooned in the Reds’ 0-0 draw with West Bromwich Albion at the weekend, Emre Can‘s function in Rodgers’ 4-3-3 at the KC was a difficult one to calculate.

He probed forward with endeavour, helping Liverpool on the break, but was humiliated consistently when in defensive situations, with the lively Robbie Brady flourishing. When moved into a centre-back role it was much the same.

It is a disservice to the German to misuse him so carelessly, particularly when specialist defensive right-back Javier Manquillo stares on blankly from the substitutes’ bench. Martin Skrtel shone in the central position in Rodgers’ much-lauded back-three defensive line earlier this season for two salient reasons: his duties were limited to a pure, physical defensive game, and his time in possession was restricted to short passes to Can and Mamadou Sakho in the more progressive roles on his flanks.

With Rodgers reverting to a back four now in a 4-3-3, Skrtel’s flaws are exposed, and it was much the same at the KC.

When challenged physically, Skrtel typically prevailed; when asked to do anything else—as evidenced by his comparatively low 83.3 percent passing accuracy—he struggled. Luckily, Hull’s game-plan largely relied on the former.

After an efficient display at the Hawthorns at the weekend, Dejan Lovren was again fielded in Rodgers’ defence and largely kept things simple in a tidy display.

However, despite this, the 25-year-old offered a lot less in terms of physical prowess when compared to Skrtel, typically shrinking from the action. Lovren is building his confidence, but still not offering enough; the absence of Sakho is profound.

Once again serving as Rodgers’ left-back, with Alberto Moreno troubled with a minor injury, Glen Johnson offered a more conservative performance to that of the weekend, when he was dire.

Johnson was relatively solid defensively and supported more cohesively than Can at right-back, but lacked any real incision in the final third. Hull were largely restricted to attacking from wide areas and set pieces on Tuesday night, and this was thanks to a wonderful job performed by Joe Allen in breaking up play in central midfield.

The Welshman was tenacious in the challenge, wise in his movement off the ball and efficient in possession—registering the highest passing accuracy (88.2 percent) of any Reds player to last the full 90 minutes at the KC.

It is an unfashionable role, but one performed diligently by a quietly impressive Allen.

Operating in a much different role to that of Allen, Jordan Henderson was ostensibly tasked with his natural box-to-box duties, supporting attacks off the ball, as well as that of a deep-lying play-making outlet when in possession.

He was successful at times, but too easily shunted into the periphery. Didn’t impose himself enough in the Liverpool captain’s armband. After the game, unsurprisingly, Rodgers attributed Philippe Coutinho with a customary “outstanding,” and the 22-year-old No. 10 was, once again, one of the Reds’ brightest performers.

Serving as Liverpool’s creative hub in an advanced central-midfield role, Coutinho was the only truly inspiring attacking player on Tuesday night, with everything going through him in the final third.

Unfortunately, due to a wider lack of ingenuity, nothing really connected for the Brazilian. Raheem Sterling has been far from his best in recent games, and this continued on Tuesday night. The 20-year-old toiled to no avail in a left-wing position, isolated from attacks and spurned by rigid Hull defending.

Sterling was dispossessed five times and made three unsuccessful touches at the KC—he was personally sloppy and expertly restricted in equal measure. Ineffective.

While much the same as Sterling on the opposite flank, Jordon Ibe offered slightly more invention in his attacking play.

As touched upon, however, this was to little benefit of Liverpool’s overall joy going forward. The Reds were too often out of sync, typified by Ibe’s isolated positioning at wide-left. After rumours that German 20-year-old Samed Yesil would start up front for the Reds at the KC, it was a slight surprise to see Mario Balotelli reprising the lone-striker role he has so struggled in this season.

It was unfortunately much of the same from the lacklustre No. 45.

Balotelli made just 19 touches of the ball in his 65 minutes on the pitch, often in a position too deep to trouble Steve Harper in Hull’s goal. It may not be his doing, but Balotelli was again on a different wavelength to the rest of the Liverpool attack.

Rickie Lambert (on for Balotelli, 65′) – 3 – A roll of the dice from Rodgers that should not have been necessary, Lambert’s introduction saw the Reds revert to a route-one approach to attack. Not that he contributed anything in that regard. Very poor.

Lazar Markovic (on for Lovren, 76′) – 5 – Brought on in a decidedly advanced right-back role as Liverpool probed for an equaliser, Markovic’s pace did help stretch things slightly, but with no real end-product. After his side failed to break through at the Hawthorns in an uninspiring 4-3-3 system, it could have been expected to see Rodgers switch things up as he looked for a much-needed victory on Tuesday night—disappointingly, we saw much of the same.

Can struggled at right-back, Balotelli lumbered as a lone striker and Sterling and Ibe were too wide to latch on to Coutinho’s creativity.

In-game decisions such as throwing on Lambert, again as a lone striker, as well as switching Can to centre-back rather than midfield and the continued Javier Manquillo snub will throw warranted questions over his tactical sanity.

An uninspired showing from an under-fire manager.

Lee Probert went about his business without little fuss, keeping things flowing when possible and keeping his cards in his pocket unless absolutely necessary.

Who was your Man of the Match as Liverpool lost 1-0 away to Hull City on Tuesday night? Let us know in the comments below.