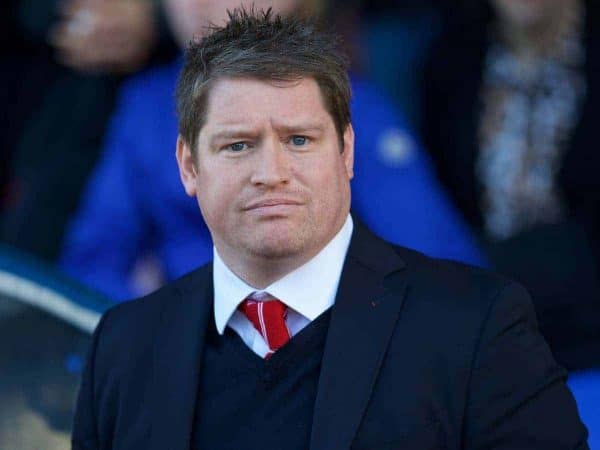 LFC Ladies manager Matt Beard spoke to This Is Anfield after a solid 2-1 win against Manchester City Ladies on Sunday afternoon. Goals from Asisat Oshoala and Line Smordsgard gave Bear’s side a vital three points and moved them into the third spot in the league table.

“Do we have a poor start again and are we preparing our supporters for another thriller with a happy ending? You never know, do you?” laughs Beard.

“We needed to win this game as both Chelsea and Arsenal won their matches. We could not let the gap be deeper. Currently we are six points behind the second spot, but our league is a matter of turns and twists and everything can happen until the end of the season.”

Beard praised his new signings Asisat Oshoala and Line Smordsgard who showed their qualities and produced a fine performance.

“Line’s performance was fantastic tonight on and off the pitch. She deserved the applause she got from the crowd.

“Oshoala was also amazing despite she was not too comfortable at the beginning when she played in the midfield. We knew who we signed as she was observed by us during the U20s World Cup. She can win the game on her own, she has a pace and she is only going to get better.

“Asisat is very tactically aware and for her as a young player coming to England and playing amazing in a very competitive game like this one (against City) is a massive achievement for her with more to come.”

“Man City were better with the ball in the first half, but we changed it in the second half and we were the better team and deserved the win.

“You can only improve game by game and we don’t have many games in our league which I think is an issue. We need more games to make it more competitive. Retaining the title for us might be a bit difficult this season as we signed many young players who have to settle in.”

“But you can see from our performance tonight that we won’t give up easily and we cannot make any more errors to defend the title. It was a solid display from the team showing the character and commitment of the players.

“Natasha Dowie was a real threat, causing lots of problems to Man City’s back four and putting a lot of pressure of their keeper.

“A huge credit to Gemma Bonner. She showed a real captaincy performance. She led the defensive line, she made lots of fine tackles, blocked the shots. She was thinking to make a pass rather than give the possession to Manchester City.”

Beard admitted that the important win gave him lots of positives and with just one game before the break for Women’s World Cup in Canada he looks forward for keeping the momentum.

“We need to go to Notts County and play our best. As I mentioned we cannot afford any more errors in our journey to defend the title and make it three in a row.

“As for the World Cup I am only hoping that everyone will come back fit as we do have some selection problems due to injuries.

“Nicole Rolser, Lucy Staniford and Katrin Omarsdottir just came back from the injuries and they are not fully match fit yet.

“I said to the players that FA Cup is so important, especially for the new players to get them settled in the team to get some more experience.

“We are all learning week in week out from our performances, the young players are learning from their mistakes and I don’t mind them to do it. If they don’t do that, they won’t be a better players and they will not be able to help the team.”