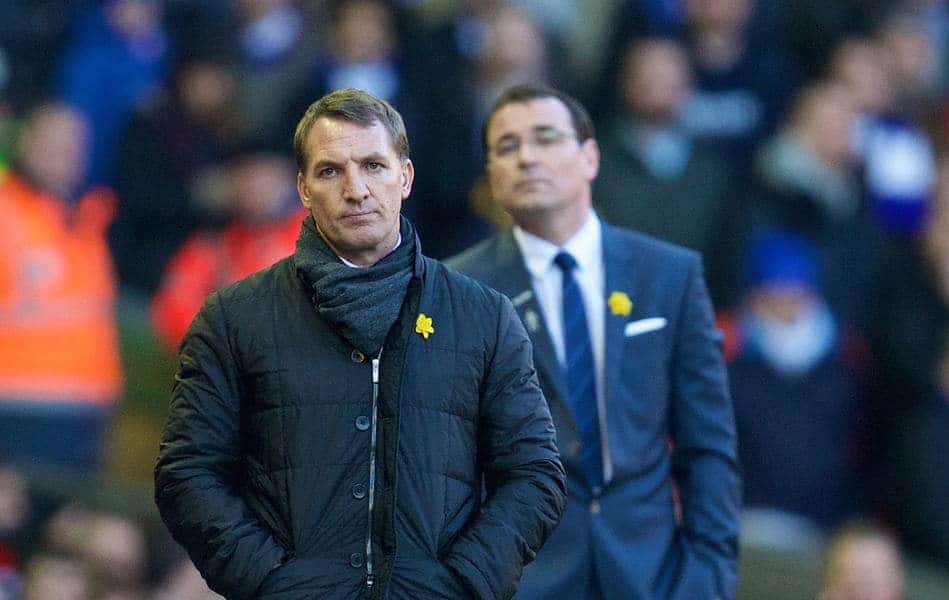 Liverpool take on Blackburn Rovers on Wednesday night in an FA Cup quarter-final replay with a visit to Wembley at stake. Here, Ben Twelves takes a look at the team selection possibilities. Brendan Rodgers’ Reds take a break from Premier League action on Wednesday night when they turn their attentions to their long-awaited cup quarter-final replay against Gary Bowyer’s Blackburn Rovers at Ewood Park.

A semi-final tie against Aston Villa and a first Wembley trip for Rodgers as Liverpool manager is up for grabs for the Reds, who must forget about recent poor league results for the winner-takes-all game against the Championship outfit and avoid another cup exit at the hands of Rovers, who have well documented previous against Liverpool in the competition.

Rodgers on Blackburn: "They have some excellent players. Pitch is difficult, but we can't wait to play again. "

It’s been a far from straightforward journey to the quarter-final stage for Rodgers’ side, who face their second replay of four rounds participated in thus far following a goalless draw in the first game at Anfield.

This promises to be another tough test for the confidence-stricken Reds against Boywer’s men, who have already eliminated Premier League teams Stoke City and Swansea City by convincing scorelines.

With Champions League qualification hopes having taken a huge blow and a top-four finish now all but lost, Rodgers is set to name as strong a starting XI as possible for the game as he goes in search of his first silverware as Liverpool manager.

Steven Gerrard and Martin Skrtel are unavailable as they serve the second of three game suspensions, and following his red card at the Emirates last weekend, Emre Can joins the experienced duo in being banned for the clash.

A place in the back three opens with the German suspended handing Rodgers the decision of choosing between Dejan Lovren and Glen Johnson to fill the shirt should he stick with a three-man defence, though the Northern Irishman could use the lack of quality central options available as the chance to revert to a back four with Javi Manquillo and Jon Flanagan ready to enter.

Rodgers has decisions to make in midfield where his selection of Lucas Leiva, Joe Allen and Jordan Henderson proved counter-productive in the defeat at the Emirates, and the Reds boss could reshuffle his central midfield pairing with the Brazilian having looked extremely off-pace on his comeback from injury.

Adam Lallana missed the loss in north London but the 26-year-old could make a return to the squad, though Mario Balotelli will face a late fitness test for the clash at Ewood Park where Daniel Sturridge will be hopeful of returning to the starting team after coming through 45 minutes unscathed on Saturday.

Despite suffering a downturn in performances and results in recent weeks, Rodgers is likely to keep faith with the 3-4-2-1 system with its impact on Liverpool’s season not to be underestimated.

A change of personnel is needed however, and Lovren should be the man to come into the back three for Can, and with the Reds lacking energy and drive from the middle of the park on Saturday, Rodgers should restore Henderson to a central position at the expense of Lucas who looked way short of match fitness at the Emirates.

With Henderson moved centrally, Lazar Markovic should drop back to right midfield, allowing Raheem Sterling to play in attacking midfield with Philippe Coutinho, and Sturridge to return to the starting line-up to spearhead the Liverpool attack which lacked a striking instinct in the costly first half at Arsenal.

Those switches to the starting team would see the Reds line up like this in Lancashire on Wednesday: However, following a number of poor defensive showings last time out, Rodgers could make more than one change to his back three and bring both Lovren and Johnson into the team for Can and Toure.

The Reds boss could also stick with the same midfield keeping Henderson wide, and use the match as the perfect chance to afford Lucas more minutes as he searches for sharpness alongside adding an extra physicality to the midfield battle.

Having been withdrawn at half-time in the capital, Markovic could find himself back amongst the substitutes meaning Sturridge would again come into the side to play alongside Coutinho and Sterling in the front line, hopefully bringing his clinical finishing with him on return.

Those changes would see the Reds XI look something like this come kick-off on Wednesday night: Rodgers asked about 4th v silverware: "Winning a cup is something we want to do as a group. Would mark another step forward for us"

With top-four aspirations fading and the Premier League season petering out the Reds have the chance to claim silverware with FA Cup glory in sight, but first they must produce a professional performance to ensure they overcome Blackburn Rovers to make a first trip to Wembley since May 2012.