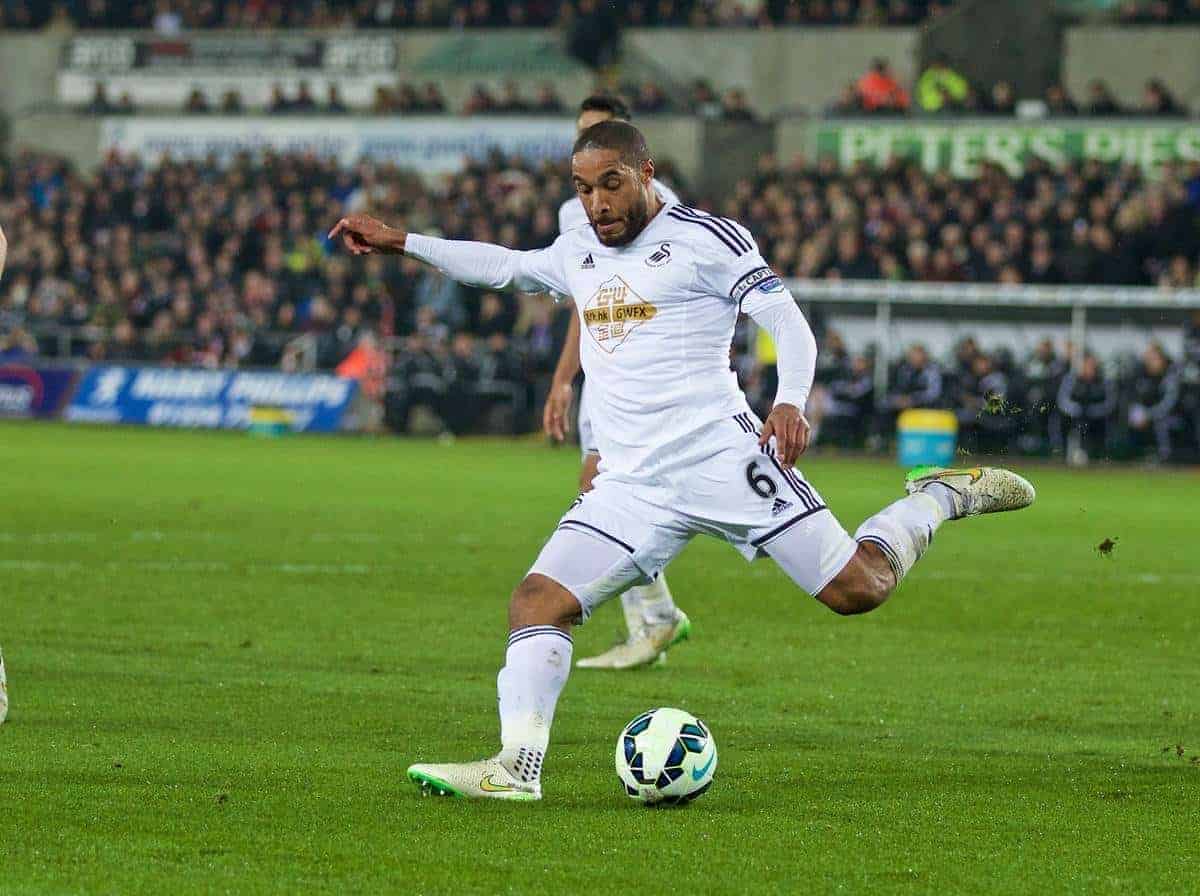 Brendan Rodgers looks set to revive his interest in Swansea City centre-back Ashley Williams this summer, according to reports, but is the 30-year-old really the right man to bolster the Reds’ defence?

Suggestions are that: “The Swansea defender is back on the Reds’ transfer radar after an impressive season at the Liberty Stadium.

“Rodgers is a long-term admirer of the centre-half and made an attempt to sign him two years ago.

“The Wales international signed a three-year extension to his Swans contract last summer, but that is not expected to deter Liverpool as they consider whether to move ahead with their pursuit of the player.”

While the source is barely reputable, the immediate response to this link will likely be disappointment either way, so why should Liverpool look elsewhere rather than Williams this summer?

The Need to Reinforce

As the report suggests, “Liverpool [will] begin a search for new options at the centre of defence,” in the summer.

This stems from a variety of reasons, from failure in the transfer market last summer, the expected departure of some regular squad fixtures and a general need for reinforcement.

The £20 million signing of Dejan Lovren last summer can so far be consigned to be a miserable miscalculation by Rodgers—the former Southampton man flourished behind the exceptional covering midfield duo of Victor Wanyama and Morgan Schneiderlin, but has struggled since his move.

Both Kolo Toure and Glen Johnson see their Liverpool contracts expire at the end of the season, and while Toure is currently considering whether to sign an extension, the 34-year-old is only a backup player.

Furthermore, despite an improvement in fortunes at the back in the second half of the season, there remains a palpable feeling of impermanence—as if the wheels could fall off once again.

This has been highlighted recently by suspensions to Martin Skrtel and Emre Can, and will likely be furthered by injury to Mamadou Sakho.

Rodgers is now facing the prospect of cobbling a makeshift back line together, so there is no surprise Liverpool are looking for centre-back signings again this summer.

But is Williams the right target?

On the face of it, Williams is a comfortably established and reasonably accomplished Premier League defender, who has been a near ever-present for the Swans in the top flight for the past four seasons.

He is a strong leader, and an astute organiser of a back line that has conceded 40 goals this season—just four more than Liverpool.

This has included 11 clean sheets—just one less than Liverpool.

He’s a defender that former Swansea manager Rodgers trusts, has a strong working relationship with and who was a boyhood Liverpool fan, idolising John Barnes as he grew up.

Furthermore, Rodgers is a manager Williams respects, and explained in his 2012 book that: “Brendan gave me that extra 10 or 20 per cent which meant that when the Premier League came along, I didn’t look out of place, and that improvement was testament to him.”

Much of this comes in Williams’ reading of the game—a key attribute in an ageing defender—and the 30-year-old has averaged 2.6 interceptions per league game this season, more than any other Liverpool defender.

Of the rest of the Premier League, only eight other centre-backs have made more this season.

Beyond his perception, Williams’ main qualities come with his no-nonsense style, which sees him make an average of 10.3 clearances per game, again more than any other Liverpool defender—the Reds’ more frequent clearance-maker is Skrtel, with 10.1 per game.

Only two Premier League players have made more.

But, still, is this the right profile of defender that Liverpool should be targeting?

Liverpool’s best defensive system this season has come with a back line consisting of three centre-backs, namely Sakho, Skrtel and Can.

The concept of this system has been with Skrtel operating as a sweeper of sorts, sitting deep, mopping up loose balls and laying short passes to Sakho and Can in the wider centre-back positions.

Sakho and Can are tasked, along with their traditional defensive duties, with bringing the ball the out of defence—particularly in Can’s case, with the 21-year-old regularly making 70-yard runs towards the opposition penalty area—and supplying the Reds’ more offensive players with a direct pass.

This was confirmed by Can last month, as he described: “I wouldn’t really call myself a right-back. [But] it is demanded that I have an attacking approach, and also get involved in the build-up play.”

Williams is more akin with the limited, physical profile of Skrtel; both Sakho (0.9) and Can (1.3) have averaged more dribbles than Williams (0.1) and Skrtel (0.1) combined this season.

With Toure and Lovren more than capable of filling in this basic role, it is debatable whether there is any need to sign another player of this skill set, particular given Williams is far from an upgrade on Skrtel; if he came in, Williams would be more likely to be a replacement for Toure.

Instead however, as seen as Can continued his testimony last month, Liverpool should be targeting a more progressive centre-back this summer.

“The coach knows that I prefer the role in midfield and that I see myself there in the future.”

Next season, Can will likely move into midfield to fill the void left in the squad by the departing Steven Gerrard and the potentially Serie A-bound Lucas Leiva.

Even if Rodgers doesn’t persist with the back three next season, signing another limited centre-back shouldn’t be the way forward—Liverpool must aim higher.

There are many targets of this ilk that aren’t beyond the realms of fantasy—Toby Alderweireld, Fabian Schar and Jores Okore, for example, are all arguably attainable targets who are comfortable bringing the ball out of defence, and the returning Tiago Ilori seems primed for this role.

If Rodgers is intent on bringing in another bullish, sweeper option this summer, a player like Nicolas N’Koulou or Kyriakos Papadopoulos would be much more well-equipped to eventually succeed Skrtel in this role.

Ashley Williams may be a strong, gifted Premier League defender, but the Swansea City man should not be the player Liverpool turn to in reinforcing their back line this summer.

Would Ashley Williams be the wrong signing for Liverpool this summer? Let us know in the comments below.