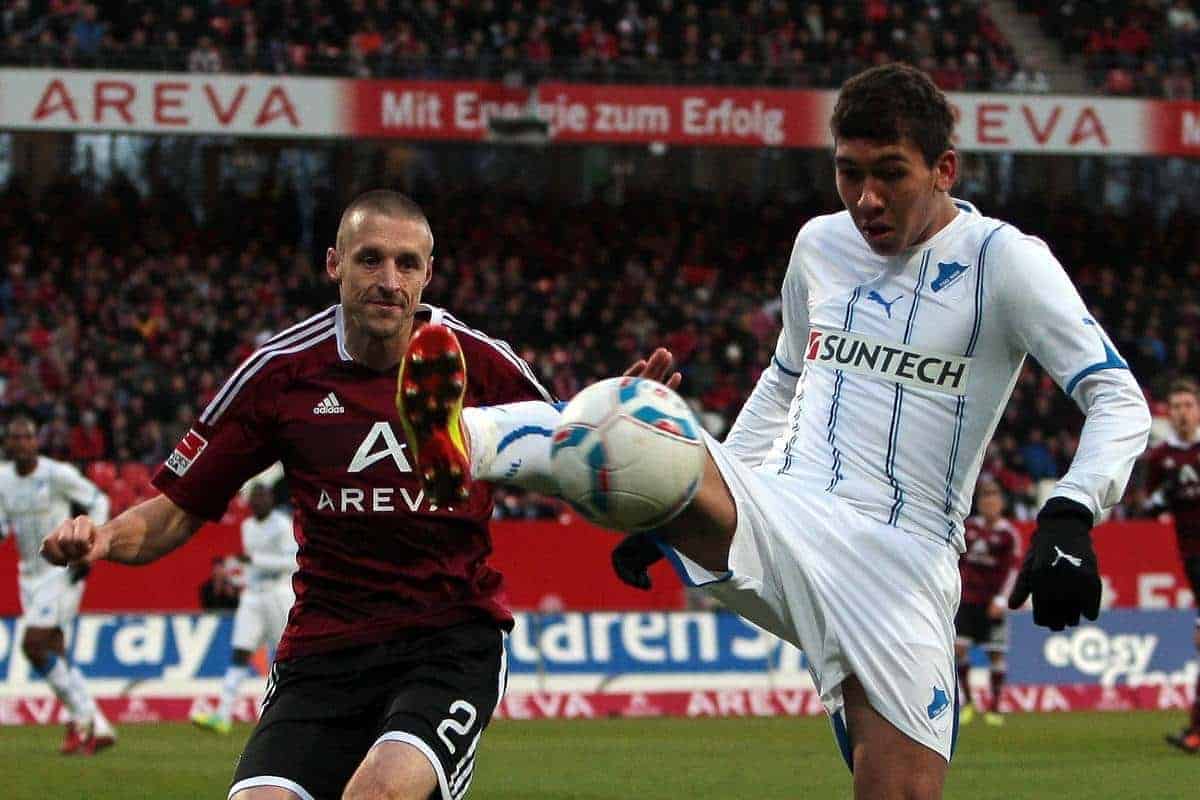 After Brendan Rodgers’ concession that Liverpool may struggle to sign ‘top level’ players this summer, Jack Lusby finds quality, including 1899 Hoffenheim’s Roberto Firmino, outside of the high-end market. Brendan Rodgers fears that Liverpool won’t be able to compete in the transfer market without Champions League qualification, so who can he sign now that the Reds’ top-four hopes have been dashed?

After Saturday’s 4-1 loss away to Arsenal, Rodgers claimed: “Players want to play at the top level of the game and if you are not in the Champions League it makes it difficult for you.”

Despite significant investment last summer, increasingly apparent deficiencies and the loss of numbers above all else with the likes of Steven Gerrard and Glen Johnson set to leave, it would be wise to suggest Rodgers needs to bring another strong group in this summer.

But who can he target?

For the purposes of this overview, goalkeeper, centre-back, left-back, right-back, defensive midfield, central midfield, attacking midfield and centre-forward have all been catered for.

Furthermore, only players who didn’t experience Champions League contention with their current club this season and don’t look likely to next season through league qualification were considered.

So where do Liverpool look to find quality outside of the Champions League market?

With Brad Jones likely to leave Liverpool at the end of the season, Rodgers will need to sign a goalkeeper—to either provide current first choice Simon Mignolet with competition or able cover.

21-year-old FC Koln shot-stopper Timo Horn would be an ideal signing to jolt Mignolet into sustained form, and at such a young age he could solidify the position for Rodgers for the long-term.

Horn has kept 10 clean sheets in 27 Bundesliga games this season, the fourth most of any goalkeeper in the German top flight.

In terms of centre-backs, a return for a former Liverpool Academy star could be a wise choice for Rodgers, with Athletic Bilbao destroyer Mikel San Jose a stand-out candidate.

San Jose made the move back to Bilbao after a three-year spell at Anfield which heralded no first-team appearances, but has now developed into one of the best under-the-radar centre-backs in Europe.

This season, San Jose has made 2.5 tackles and 2.6 interceptions on average per La Liga game, more than any Liverpool centre-back, and his ability to play as a defensive midfielder would lend to Rodgers’ tactical approach.

Alberto Moreno’s form for Liverpool has stuttered of late, and with Jose Enrique far from an accomplished top-level left-back, Rodgers must reinforce this position in the summer.

SC Freiburg’s Christian Gunter would be an interesting proposition with this in mind.

The 22-year-old is a reasonably accomplished defensive left-back, averaging 2.1 tackles and 1.3 interceptions per Bundesliga game this season, but is most eye-catchingly proficient going forward—Gunter has made 2.1 dribbles on average this season, more than any Liverpool full-back. Newcastle United right-back Daryl Janmaat has already been linked with a move to Liverpool this summer, and Rodgers should pay heed to this speculation.

Janmaat is a well-balanced, experienced right-back, already acclimatised to the Premier League and capable of operating in an advanced wing-back role—perfect for Liverpool?

Perhaps Janmaat’s assertion that Newcastle were “too negative” in their recent Tyne-Wear derby loss to Sunderland would endear him to a move to the more positive, attacking Liverpool.

With the loss of Gerrard, the wavering fitness of Lucas Leiva and a general dearth in the squad, Liverpool must sign a defensive midfielder in the summer; if they are unable to compete for the likes of Sami Khedira and Morgan Schneiderlin, Malaga’s Ignacio Camacho would be an ideal alternative.

Tentatively linked with a move to Anfield last month, Camacho could bring a certain tenacity to the Liverpool midfield that has been somewhat lacking this season.

The 24-year-old has made 3.4 tackles and 2.6 interceptions this season, with this combined total (six) higher than any Liverpool player.

As well as needing a midfield brute, the loss of Gerrard points to the need to sign a central midfielder with more finesse and creativity to join the likes of Jordan Henderson and Joe Allen.

FC Nantes’ Jordan Veretout could add a flourish to Rodgers’ midfield, having scored six goals and made five assists in 29 Ligue 1 appearances this season—with an average of two key passes per game, Veretout would be second only to Raheem Sterling in the current Reds squad.

At just 22 years old, Veretout has the potential to develop into a fine creative talent.

With Sterling’s long-term Liverpool future currently up in the air, and Rodgers bemoaning his side’s lack of creativity of late, it may be that the Reds opt to sign another attacking midfielder this summer.

1899 Hoffenheim No. 10 Roberto Firmino has swiftly developed into one of the best under-the-radar attacking midfield talents in Europe, and has scored six goals and made eight assists in 27 Bundesliga games this season.

A monstrously prolific dribbler, Firmino’s league average of 4.1 dribbles per game dwarfs that of even Sterling (3.1) in the Liverpool squad.

As well as lamenting Liverpool’s lost creativity, Rodgers recently explained how his side’s lack of goalscoring ability has hampered their progress this term—Rickie Lambert, Fabio Borini and Mario Balotelli could all leave this summer, so the Reds need to sign one or two centre-forwards.

Aside from the obvious target, Burnley’s Danny Ings, Villarreal hotshot Luciano Vietto is perhaps the most likely candidate for Rodgers this summer.

With 12 goals in 27 La Liga games this season, Vietto would ably complement the oft-injured Daniel Sturridge.

Which under-the-radar players should Liverpool target this summer? Let us know in the comments below.