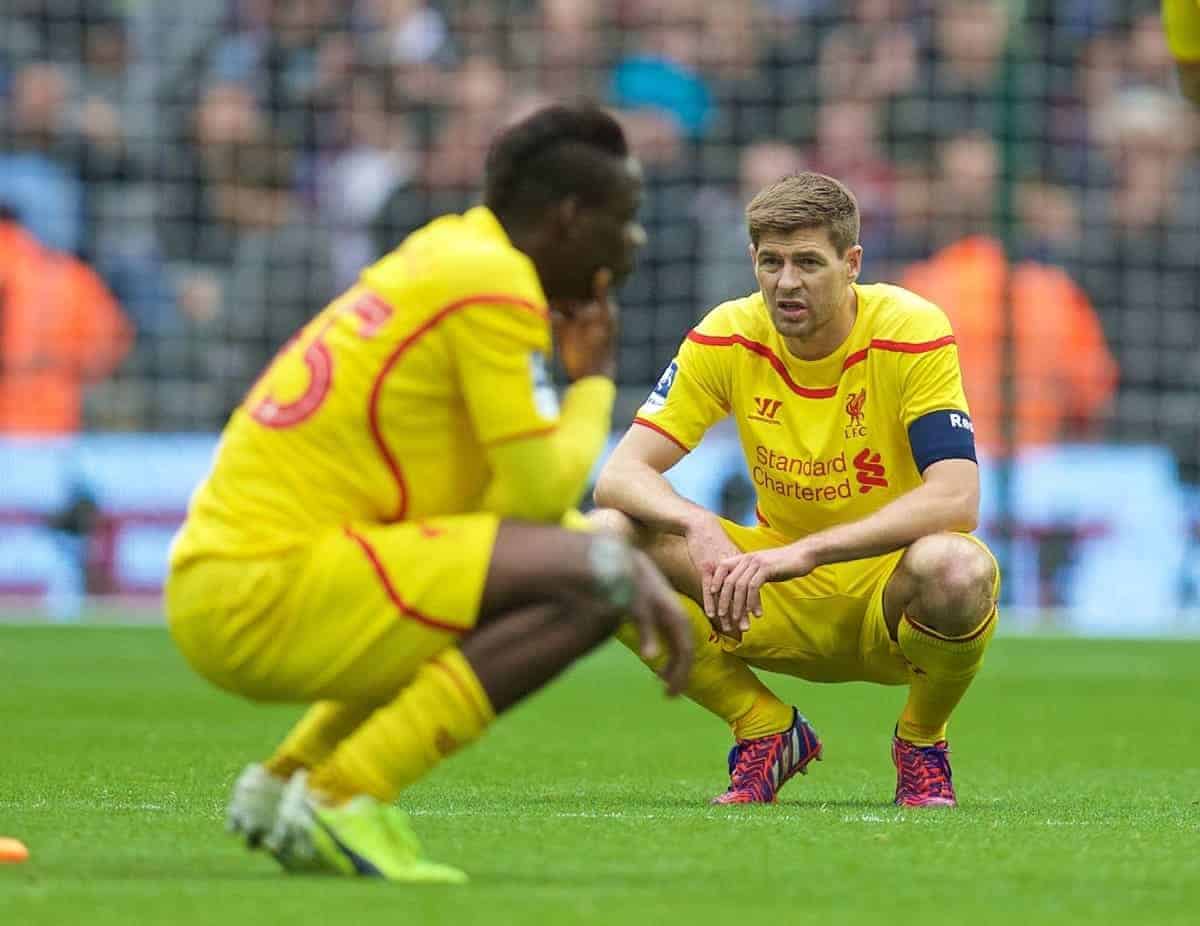 We take a look back at some of the best and worst performances from Brendan Rodgers’ Liverpool during the 2014/15 season. Liverpool’s disappointing season has finally come to an end, with an interesting summer to come at Anfield and many problems to resolve ahead of the next campaign.

But while a season that will be remembered ultimately as a let-down following last year’s outstanding progress and unforgettable title race, there were still some positive performances in amongst the numerous frustrating and simply dreadful displays.

Here, we look back at three of the best and worst team showings from the campaign. After tricky opening games against Southampton and Man City saw Liverpool collect three points from six, Brendan Rodgers watched on as his side produced a dominant performance and result at White Hart Lane.

Though still early in the season, it was the first time the Reds had displayed anything like the dominance and slick attacking play of the memorable campaign previous, in a fixture that also saw the much anticipated strike partnership between Daniel Sturridge and Mario Balotelli utilised in the diamond formation.

The duo impressed as they linked promisingly, both spurning chances to find the net – something Liverpool took only eight minutes to do as Raheem Sterling opened the scoring from Jordan Henderson’s teasing ball across the face of goal.

Bar one or two nervy moments, the Reds controlled the game in and out of possession, and soon after half-time extended their lead thanks to Steven Gerrard’s well taken penalty, before Alberto Moreno notched a superb first strike for the club on the hour mark, finishing off a blistering run with a drilled strike to wrap up an excellent victory on Rodgers’ 100th game in charge.

The Reds had endured a tough first four months to the season, but the tide was turning as Rodgers’ side showed with their biggest win of the season.

A freezing cold Anfield watched as Rodgers’ men – lining up in the 3-4-3 system – quickly took control against Garry Monk’s side, though initially struggled to click in the final third until Moreno opened the scoring after half-hour, converting Henderson’s low cross.

The Spaniard’s goal increased confidence, and a more dominant and free-flowing performance ensued after the break, which saw Adam Lallana double the lead after Lukasz Fabianski’s clearance rebounded off the 27-year-old and into the net, before Gylfi Sigurdsson halved the lead a minute later with a finish from close range.

The Swans then grew in belief and got a foothold in the match, but Rodgers’ side held their nerve, grew back into the game with some impressive football, and notched their third of the night through Lallana’s second after the summer arrival linked superbly with Philippe Coutinho to slot into the Kop net.

The Reds pushed for more, and they got it when Jonjo Shelvey diverted Henderson’s floated corner into his own net to put the gloss on the score-line, rounding off a productive night when everything clicked and hope was provided for a much better second half of the season.

A match against the Champions just a matter of hours after an awful European night is the very definition of a footballing nightmare, but the Reds defied the odds to pick up arguably the result of the season.

Liverpool had just endured Europa League disappointment against Besiktas in Turkey, and a tired and depleted team took to the Anfield surface to take on Manuel Pelligrini’s City – and that they did.

The Reds came out all guns blazing from the first whistle to compete against their fresher opposition and after an energetic start, Henderson crashed home a thunderous 25-yard drive to fire the Reds ahead.

It looked like it was the away side who had been on the end of a gruelling fixture schedule initially, but as expected, the Citizens enjoyed their own spells of dominance against the weary Reds, and equalised just 15 minutes later when Edin Dzeko finished off a fine City move.

But on a day when a monumental effort was required to get a result as Rodgers’ men played catch up in the race for fourth, a superb second half certainly produced it, as Coutinho fired an outstanding strike for the second game running, this time past Joe Hart to put Rodgers’ side back in front, before a battling final 15 minutes grabbed a hard-fought victory.

Magnificent performance from Liverpool against full-strength City side after the disappointment – and their exertions – of Thursday night.

The Bad – and Ugly

Liverpool had endured a difficult start to the campaign when they visited wet and windy bogey ground Selhurst Park, and it proved to be another forgettable trip to SE25.

The Reds turned in a display in keeping with awful weather as they slumped to their lowest ebb of the season (pre-Stoke horror-show) despite taking the lead after just two minutes through Rickie Lambert, who finished Lallana’s through-pass excellently for his first Liverpool goal.

But the opening two minutes was as good as it got that day, as Neil Warnock’s energetic Eagles proved too dominant for the struggling Reds for the remainder of the afternoon, and 15 minutes later, Dwight Gayle stuck the ball past Simon Mignolet to level the scores not for the first time.

A display bereft of energy, confidence and ideas, a soaking wet Rodgers watched Dejan Lovren and Glen Johnson endure torrid afternoons against Yannick Bolaise, who was too strong, quick and skilful for the pair down the Palace right, where he cut the ball across goal to an un-marked Joe Ledley to strike home.

So Liverpool return to Palace in FA Cup 5th round – scene of what Rodgers called "lowest point of our season in terms of performance level."

Well and truly outplayed and outfought on a day Rodgers later described as “the lowest point of the season”, it went from bad to worse as Mile Jedinak fired a free-kick into Mignolet’s top scorer to make it 3-1 and game over on a horrendous afternoon that had absolutely no positives.

There was hope that the FA Cup would prove the saving grace of a miserable campaign, but any chance of that was put to bed with a dreadful display and result at Wembley.

The big occasion proved too much for the confidence-stricken Reds to handle once again in a season of let-downs in crucial fixtures, as Villa dominated the game from the first whistle to the last, despite Philippe Coutinho’s jinky run and finish on the half-hour mark handing Rodgers’ side the lead against the run of play.

Tim Sherwood’s men came straight back at the lethargic Reds with tempo and aggression in their play, and as a result had to wait just six minutes to level the scores through Christian Benteke’s side-footed finish past Mignolet.

There was only one team in the game, and it felt inevitable that Villa would go on to claim their place in the final with the Reds firmly on the back foot and struggling to hold back the tide. Sure enough it was.

Nine minutes into a second half that followed the pattern of the first, the marauding Fabian Delph was too strong, direct, and determined after latching on to Jack Grealish’s pass in the box, where he wrong-footed the hapless Lovren to slam past Mignolet.

Steven Gerrard saw his header cleared off the line with Liverpool’s only effort of the second half, and the Villians comfortably saw out the final moments to eliminate the Reds – condemning Rodgers to the unwanted stat of being the first manager to not win a trophy in his first three years in charge since Phil Taylor in 1956-59.

The score-line says everything. It still hurts when thinking about it, and it will do for a time to come yet.

It was a day that was supposed to remembered fondly as Steven Gerrard’s last for the Club, but while the Captain issued his own parting gift with a tidy consolation goal on a humiliating afternoon, it will be recalled as the darkest day in Liverpool’s on-pitch history.

No striker, no game-plan, no passion and no fight, Liverpool were shambolic from the first whistle with a disjointed set-up that was ruthlessly exploited with embarrassing ease by Mark Hughes rampant Potters.

Five goals shipped in the space of 23 first half minutes before the interval handed out the ultimate humiliation to under-fire Rodgers and his clueless side, who produced a performance even more spineless than the horror-show that unfolded at Anfield a week earlier against Crystal Palace.

“The worst half of football in our entire history” – Liverpool fans react to 6-1 humiliation: http://t.co/wVICLb334m pic.twitter.com/aEnbr9jjAj

Gerrard fittingly grabbed a consolation goal mid-way through the second half of his nightmare send-off, before Peter Crouch compounded the misery with his header making it six on a truly shameful day in the history of Liverpool Football Club – one that may yet have fatal consequences for Rodgers.