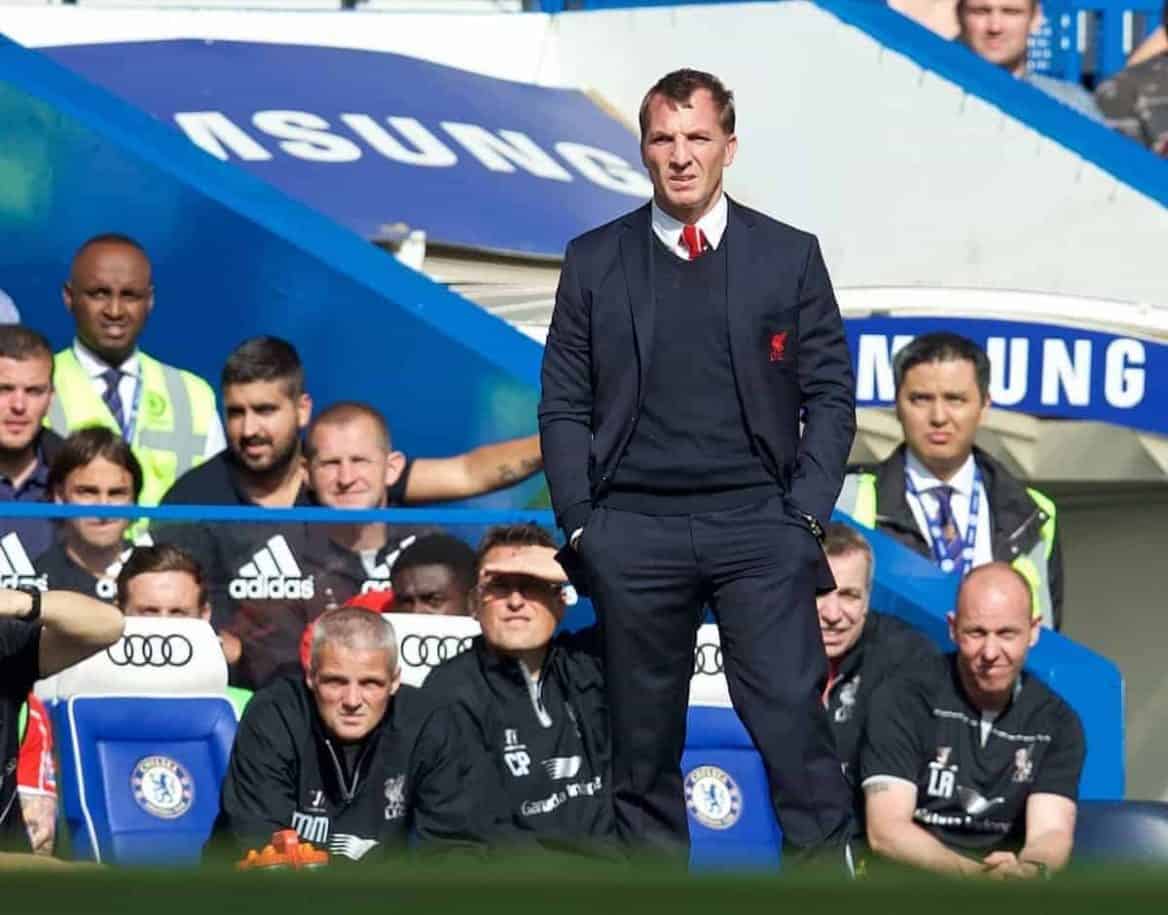 Brendan Rodgers felt Chelsea playmaker Cesc Fabregas should have been sent off in the opening minute as his Liverpool side’s Champions League hopes were all but ended at Stamford Bridge.

Steven Gerrard was given a rousing ovation after withdrawing from his final bout with Jose Mourinho, having cancelled out John Terry’s header in a 1-1 draw.

The Reds needed to inflict Chelsea‘s first home loss in the league this season to keep their slim chances of qualifying for the Champions League alive, but are six points behind fourth-placed Manchester United with two games to play and a goal difference of 14 to overcome.

Europa League football is likely at Anfield next term, but Rodgers praised his players for their response to going behind, reserving his frustration for referee Andre Marriner’s decision to only book Fabregas for a reckless centre-circle lunge on Raheem Sterling.

“It was a poor challenge. Fabregas should’ve been sent off – out of control, diving, stretching,” Rodgers said.

“It was early in the game (but) it doesn’t matter if it’s early, beginning of the second half, end of the game. It was a bad challenge and he deserved a red card for it.”

Fabregas’ tackle came after Liverpool gave Chelsea a guard of honour on to the field in recognition of their title success.

Chelsea boss Mourinho said he did not see the challenge and thought it had been John Obi Mikel who committed the foul.

In fact, Mikel was booked by Marriner before Fabregas, with the Nigeria midfielder’s card immediately rescinded.

Last season the Blues ended Liverpool’s hopes of a first championship in 24 years and Gerrard has not been allowed to forget it after his slip let Demba Ba in to score a crucial goal at Anfield.

The former England captain was the subject of plenty of songs on Sunday, with his goal a riposte before he was was replaced 11 minutes from time.

Mourinho, who three times tried to sign Gerrard, led the applause, which swiftly drowned out the boos from the home faithful, who were louder than during last week’s title-clinching defeat of Crystal Palace.

Gerrard told Sky Sports: “The Chelsea fans showed respect for a couple of seconds, but slaughtered me all game. It’s nice of them to turn up for once today.”

Mourinho, who criticised his own supporters earlier this season, said: “The negative song only shows respect. “For Steve he gets that for almost two decades every week when he plays at Anfield.

“To get that in an away stadium I think is a fantastic way for him to feel that probably every club, every stadium in this country, respects him a lot.”

Rodgers added: “He’s taken a lot of stick here, but I think the Chelsea supporters knew deep down it’s only because he’s a superstar player. They showed great appreciation for him.

“He’s a player that makes the big contributions when needed. I’ve said before he’s irreplaceable but we need to find the solutions, one way or the other.”

Gerrard will not be Liverpool’s saviour on this occasion, with the Reds all but mathematically out of the Premier League top four ahead of his final game at Anfield next Saturday against Crystal Palace.

Rodgers, who bemoaned a slow start, said: “We sit in fifth place and that’s probably where we’re at. If we want to make the next steps, we need to find some acquisitions in the summer to help us do that.

“The players that I’ve worked with have been brilliant, given everything. Like today, we’ve been very unfortunate.”