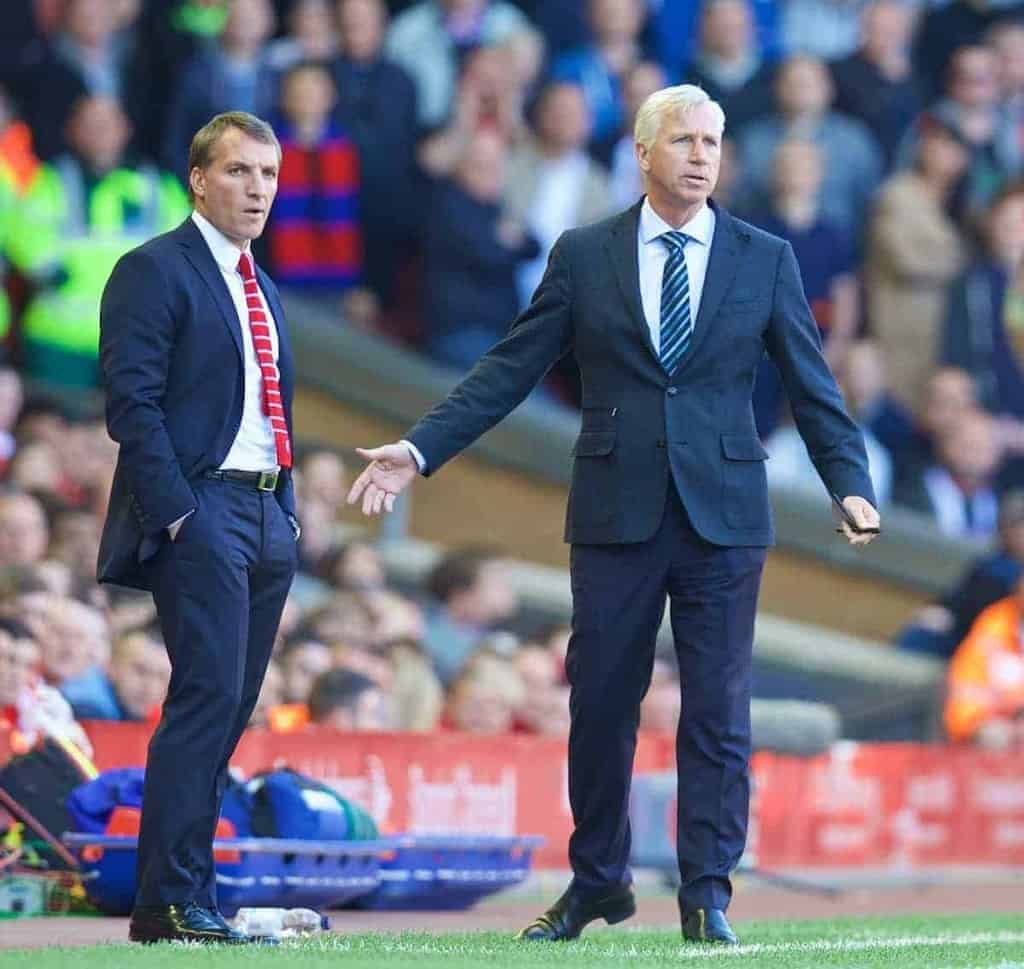 On an emotional day at Anfield that saw the Reds slump to a miserable defeat against Alan Pardew’s Eagles, Ben Twelves picks a number of talking points from the fixture. Brendan Rodgers’ Reds ended the campaign at Anfield with a shocking performance and result to sum up a largely dreadful season.

Adam Lallana handed the Reds the lead with a strong run and finish after 26 minutes, but Jason Puncheon’s well stuck free-kick levelled the scores before half time, ahead of a truly awful second period that saw goals from Wilfried Zaha and a penalty from Glenn Murray wrap up a deserved win for the Eagles.

It was far from the send-off hoped Steven Gerrard would receive in his final Anfield outing, and here are the talking points from a sad afternoon in L4.

On a day that was all about turning the attention away from a miserable campaign and onto our departing legendary captain, it was far from the dream exit planned.

The captain found it hard to influence the game when played deep in central midfield with Palace deploying Marouane Chamakh in tandem with Yannick Bolasie to prevent the skipper receiving the ball to play-make, and he was very much on the periphery of the game for the duration.

Without the help of his teammates, who disappointingly took a back seat, Rodgers threw the captain forward to the position of his prime years where he attempted to influence proceedings in the final third playing in behind Rickie Lambert.

Gerrard demonstrated some nice one touch and link up play while advanced with his intelligence obvious, but it was a move that ultimately proved fruitless with the 34-year-old’s only efforts on goal being two wayward strikes which both the Kop and then the man himself acknowledged.

Poetic way to go. Needed the team to win it for him, when he couldn't do it himself anymore, & they flop. Never could rely on anyone else.

It was desperately disappointing that the Club’s best ever had to bow out on Merseyside being part of such a poor performance with his team-mates failing to step up when he needed them to, after years of the reverse.

It was another day to forget for Lovren at a sun-drenched Anfield after the Croatian turned in another woeful performance.

Dejan Lovren gets more and more shocking by the game. Let's hope this is his last Anfield game, too. #LFC

The summer signing failed to deal with any of Palace’s front men all afternoon, and was treated like a rag-doll being dragged into positions he didn’t want to be out wide – and it was plain to see why, as time and again the 25-year-old was roasted by Bolasie in the Eagles attack, who fully exploited Lovren not for the first time this season.

Indecisive, lacking simple judgement and awareness, Lovren showed exactly why he has been on the receiving end of mass criticism this season as he continually failed to carry out the most basic defensive functions  as part of a back three and four – being beaten easily 1v1 after getting himself square on, being beaten for pace time and again and providing very little assurance at the heart of the Reds backline.

Dejan Lovren was absolutely shambolic in both games—terrified of pace, no idea what to do when isolated in the channels.

With another hideous performance from the ever below-par Croatia international, Rodgers must seriously consider swallowing his pride and cutting his losses on Lovren this summer.

Since giving that interview Sterling has been badly out of form, and it was no different on Saturday at Anfield.

The 20-year-old produced a hugely frustrating display – lacking quality at key moments and failing to provide any attacking spark – and while the Reds attacking deficiencies cannot all be pinned on the youngster in the slightest, his lack of contribution on and off the ball to a toothless offense was undoubtedly poor.

Too often the No.31 under or over-hit passes, ran up blind alleys or out of play, and held onto the ball for too long.

While he drifted into positions between lines well to receive the ball at times, what he did with it thereafter left a lot to be desired – as he recorded the most unsuccessful touches of any Red (5) alongside being disposed the most and displaying some poor shooting that saw him register only one of four shots on target.

Though undisputedly talented, Sterling has a lot of work to do to recapture the form that catapulted him into the limelight last season.

Raheem Sterling has been awful here today, yet again. Really disappointing end to his #LFC career.

It was another poor afternoon for the Liverpool manager in the dugout as his game plan was this time ripped to shreds by Pardew.

His Palace side caused all manner of problems for Rodgers’ Reds, and the Liverpool boss struggled to swing the game in his team’s favour despite taking the lead – a goal which came totally against the run of play.

The Northern Irishman again operated with players out of position as he returned to the 3-4-2-1 system – with Emre Can at right centre-back, Alberto Moreno at left wing-back where the Spaniard found himself very much on the fringes of the action and Raheem Sterling as an isolated front-man – and it showed as a disjointed and toothless performance ensued.

4-2-3-1 and a third system of the afternoon at home to Palace. Gerrard pushed forward to the No. 10.

In an attempt to salvage the game on the Captain’s big day, Rodgers made numerous tactical switches – including changing to 4-3-3 and 4-2-3-1 during the 90 minutes – and just like it did at Wembley, the continual adjustments and alterations backfired with mixed messages leaving the Reds struggling.

The scattergun approach tactically certainly contributed to a woeful performance and before planning any summer business, the Liverpool boss must settle on a formation.

On another big day at Anfield, the Reds failed to turn up not for the first time, instead putting in a spineless performance and result.

The Reds lacked creativity, attacking spark, tempo and unpredictability in their play all afternoon making it easy for Palace to defend against, and at the other end, Rodgers’ side were predictably bad defensively and cut-open time and again by the pacey and aggressive Eagles front line.

How can you lose Gerrard's last game at Anfield? We've built a team of bottlers here and Rodgers looks lost.

Having failed to assert any authority or dominance on the game from the first whistle, such was the lack of productivity in the performance at both ends, that it wouldn’t have been unfair if Palace had left Anfield with more than just a 3-1 win.

Bolasie hit the bar, Lee Chung-Yong spurned a good chance on the volley in front of the Kop and Mignolet made a full-stretch stop to deny Puncheon even before he scored.

Worried about the future. The lack of heart/fight in this squad is extremely worrying. Every time we have something to play for we bottle it

Rodgers’ men froze again on an expectant occasion just like they did in the League Cup semi-final against Chelsea and in a must-win game against Man United earlier this season, and it’s a worryingly familiar feature that the Reds boss must address ahead of next season as he acknowledged in his post-match interview.

Next up for Liverpool is a trip to Stoke City for the final fixture of the season at the Britannia Stadium.